Mycoplasma pneumoniae (M. pneumoniae) is a dominant causative pathogen of community-acquired respiratory tract infections in children (1). Although pneumonia caused by M. pneumoniaeis usually benign and self-limiting, increasing numbers of cases are known to further develop into refractory M. pneumoniae pneumonia (RMPP) (2-4). Although effective integrated strategies have been developed to treat this condition (4,5), the prognosis of RMPP is unsatisfactory; this disease can lead to disability and sequelae (6-10), including atelectasis, bronchiectasis, occlusive bronchitis, and bronchiolitis obliterans.

Pulmonary hypersecretion and mucosal damage to the airways have been observed in RMPP patients; these are associated with the poor prognosis of RMPP (11,12). Eliminating these secretions and reopening the airways is essential in RMPP rehabilitation. Acapella® Choice (Smiths Medical) combines high-frequency vibration therapy and positive expiratory pressure (PEP) therapy. Vibration therapy loosens viscous pulmonary secretions by vibrating the flow of air through the lungs. PEP therapy, which expands the airway using positive pressure generated by exhalation, then pushes loosened secretions into the large upper trachea, where they are easily discharged by coughing. Acapella® Choice facilitates bronchial clearance of secretions, which increases the quantity of expectorated mucus and improves pulmonary function (13-15). At present, Acapella® Choice is widely used in the treatment of chronic respiratory diseases, including chronic bronchitis, cystic fibrosis, and bronchiectasis (16-19). We hypothesize Acapella® Choice will facilitate the drainage of pulmonary secretions in the small airways and assist in the repair of mucosal damage caused by M. pneumonia infection in RMPP patients.

We present the following article in accordance with the STROBE reporting checklist (available at http://dx.doi.org/10.21037/tp-20-237).

Sixty children with stable RMPP that attended the Children’s Hospital of Fudan University between January 2018 and December 2019 were enrolled in this study. Serologic tests confirmed M. pneumoniae infection (detection of M. pneumoniae IgM by ELISA) and/or PCR [detection of M. pneumoniae in bronchoalveolar lavage fluid (BALF)]. RMPP is clinically defined as a case of M. pneumoniae pneumonia with prolonged fever accompanied by the deterioration of radiological findings despite appropriate treatment with macrolides for 7 days or more (1,20). Other study inclusion criteria included the following: (I) mucosal damage, including rough membranes, swelling, increased secretions, mucosal erosion, and poor bronchial ventilation or occlusion, was observed in the acute stage of disease by bronchoscopy (Figure 1); (II) patients were in a stage of clinical remission, meaning they had received treatment for at least 1 month and there were no current clinical manifestations of the condition, including fever or frequent cough, and their results on laboratory tests, including C-reactive protein (CRP) and erythrocyte sedimentation rate (ESR), were in the normal range; (III) chest radiographs or lung computed tomography (CT) still showed pulmonary abnormalities, including massive exudation, consolidation, atelectasis, bronchiectasis, and occlusive bronchitis. Children with immune deficiencies, chronic diseases, or heart diseases were excluded. All participants produced negative results on purified protein derivative tests, as well as BALF tests for respiratory syncytial viruses, influenza viruses, adenoviruses, parainfluenza viruses, and chlamydia trachomatis. The participants also produced negative results in BALF bacterial cultures and double-negative blood cultures. The study was conducted in accordance with the Declaration of Helsinki (as revised in 2013). The study was approved by the Ethics Committee of Children’s Hospital of Fudan University [No. (2016)87] and informed consent was obtained from all patients’ guardians.

Sixty Participants were divided into the Acapella group and the control group by computer-generated randomization. As no suitable data was available to calculate a sample size, we estimated sample size as 30 in each group (21). Participants in the Acapella group (n=30) were required to administer Acapella® Choice twice daily for 2 months, while control group participants (n=30) were required to receive chest percussion therapy twice daily for 2 months. These treatments were carried out after patients were discharged, meaning that they perform the therapy at home. Throughout this period, participants kept a daily log where they provided answers to the following: whether they had a cough, had produced sputum, or had chest tightness or difficulty breathing; whether their usual activity or sleep was affected; frequency of treatment, whether use of Acapella or chest percussion; and side effects of their treatment (Figure 2). Participants were followed up weekly by phone or home visits, depending on their needs, and encouraged to practice airway clearance and fill in their daily log regularly. 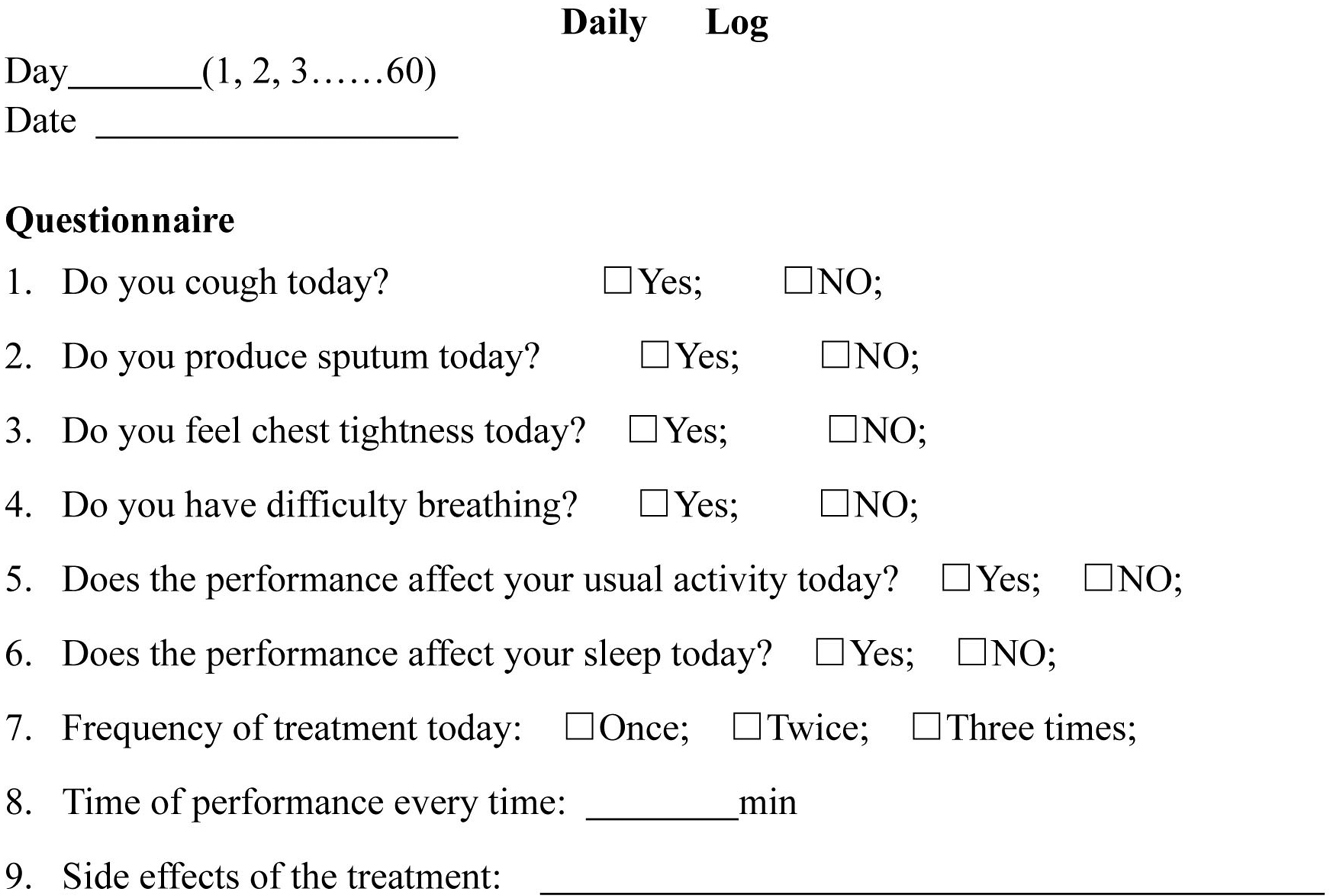 To use Acapella® Choice, a physiotherapist first adjusts the resistance according to the device instructions. A suitable resistance is one on which a patient can comfortably exhale three to four times longer. The patient then puts the mouthpiece in their mouth, takes a deep breath, holds for two to three seconds, and then exhales for three to four seconds. A patient should perform 10 breaths, followed by two to three huff coughs to expectorate. Each treatment should last 10–20 minutes. In this study, participants were taught to use Acapella® Choice correctly before administering this treatment at home. They were required to observe whether the rocker in the Acapella device was vibrating when they exhaled to ensure that PEP was generated.

The primary outcome of this study was the resolution of chest image abnormalities after 2 months treatment. Chest images were evaluated by two radiologists who were blind to treatment allocation. They graded the images as showing full resolution, partial resolution, meaning the lesions were smaller than in previous findings, or no resolution. The secondary outcome was the participants’ sputum period, being the number of days that participants expectorated sputum. The participants’ demographic data were also collected. 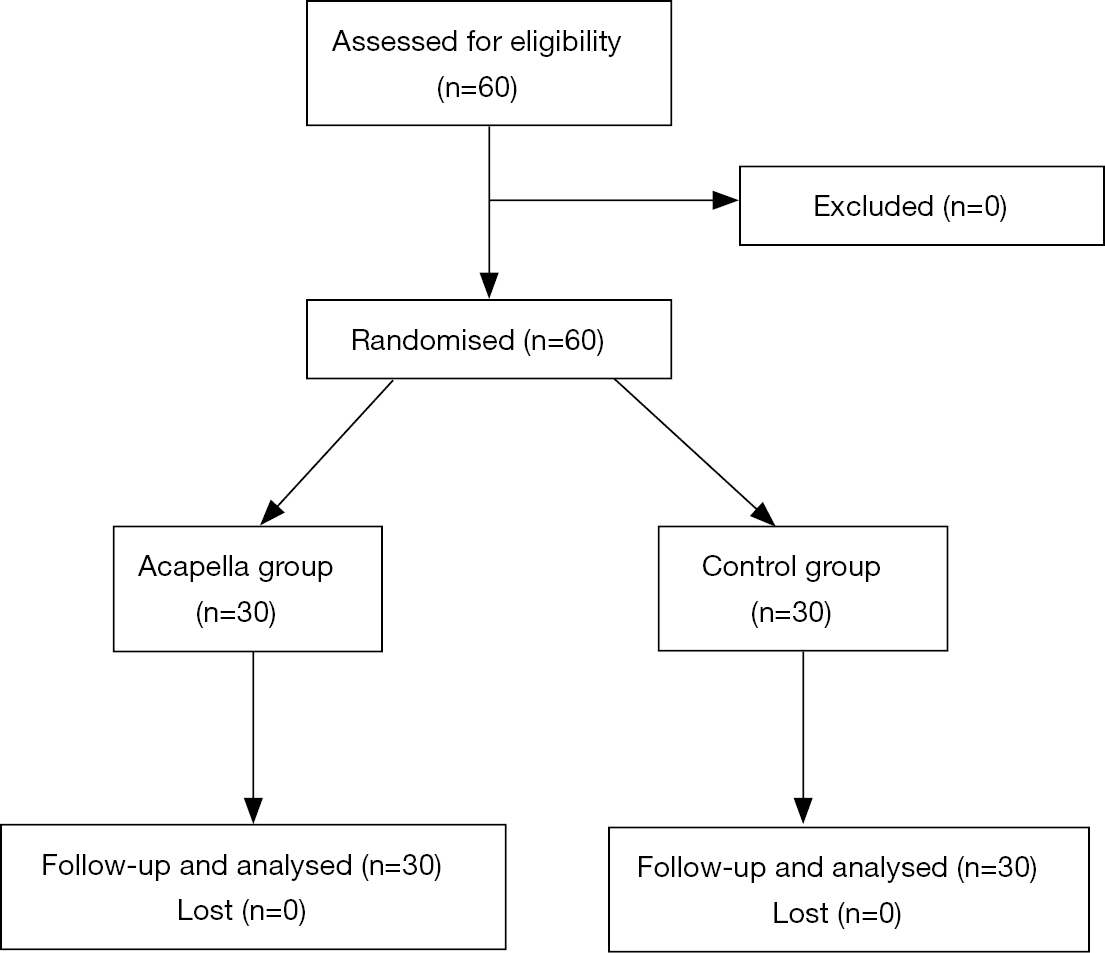 Figure 3 Flow diagram of the progress of patients.

At baseline, imaging demonstrated abnormalities, including consolidation and atelectasis in the lungs of all participants. There were no differences in lesion location between the two groups (Table 1) (P=0.11). However, the Acapella group showed better resolution of abnormalities than the control group after 2 months of treatment (Figure 4 and Table 2) (P=0.00). The proportion of participants that demonstrated complete resolution in the Acapella group (63.3%) was higher than the control group (10.0%) (Table 1) (P=0.00). 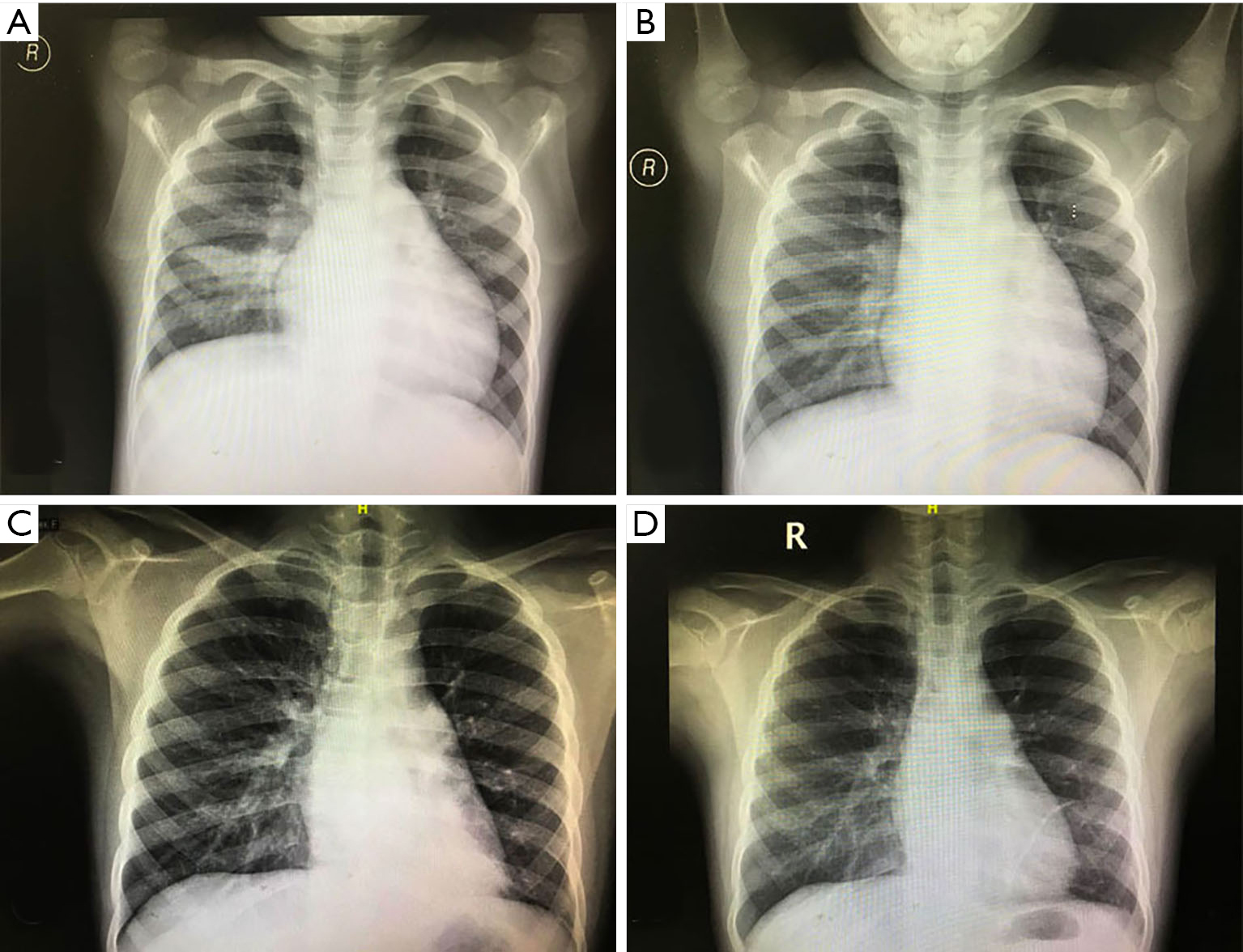 The baseline findings were that all participants had sputum in their lungs. Throughout their respective therapies, this sputum was gradually expectorated. The Acapella group’s mean sputum period was significantly shorter than the control group (Acapella group: 7.97±1.54 days; control group: 11.90±1.64 days; P=0.00).

No participants in either group reported any side effects.

This study showed that Acapella® Choice is an acceptable method to repair airway damage in RMPP patients. To our knowledge, this has not been previously reported. Hypersecretion of pulmonary secretions, as well as mucosal damage, have been observed in RMPP patients and are associated with an increased incidence of sequelae (11,12). Airway clearance is essential for the repair of mucosal damage. The Acapella device combines vibration techniques and PEP to facilitate the loosening, mobilization, and expectoration of secretions. In adults, the active cycle of breathing technique (ACBT) is often used to help patients expectorate and restore lung function (21-23). However, ACBT is not frequently used in children, as the techniques involved, including breathing control, thoracic expansion exercises, and forced expiration, are complicated for them to perform. Acapella® Choice, however, is more accessible for children to use than other therapies and is, therefore, better received by parents, resulting in better compliance. In this study, we found that children with RMPP preferred the Acapella device over chest percussion therapy as a method to clear their airways and promote pulmonary rehabilitation.

In this study, we found a better resolution of lung abnormalities in participants treated with Acapella® Choice. The Acapella group also had shorter sputum periods. These results may be related to a reduction of obstructive sputum in the small airway, reduction of bronchial inflammation, and repair of damage to the airways treated by Acapella® Choice. PEP devices have been reported to be effective in treating diseases, including bronchiectasis and chronic obstructive pulmonary disease (COPD), as well as the treatment of patients in recovery from thoracic surgery by promoting airway clearance and the restoration of lung function (21-25). In these studies, forced expiratory volume in one second was the most frequently measured primary outcome, and sputum volume or weight was the secondary outcome. In this study, resolution of lung images was used as primary outcome as it is a relatively objective measurement. In addition, spirometry measurements are difficult to young children. We use sputum period as the secondary outcome because it isn’t easy for children to spit out the sputum, which they often swallow. A systematic review showed that PEP device appeared to be effective for children with stable bronchiectasis, however, the effectiveness in people with an acute exacerbation of bronchiectasis is unknown (17). Another review showed that PEP was also effective in exacerbations of cystic fibrosis (26). Our findings were consistent with these reports, suggesting that PEP was effective for children with stable RMPP.

Our study had some limitations. The first was that a participant’s sputum period was from their self-report, which cannot be objectively evaluated. However, participants were contacted weekly to encourage adherence to their treatment plan, as well as regular record-keeping. The second limitation was that we had an estimated sample size, which may reduce the validity of our study. Additionally, participants were observed for only 2 months; a longer period of observation would produce more powerful results. The third limitation was that our participants were children. While easier than other therapies, the Acapella device is still not easy for children to use. Children also tend to swallow some secretions, as they have difficulty expectorating them, which may have impacted the participants’ records of expectorated secretions.

In summary, Acapella® Choice is an effective method of airway clearance and resolution of lung abnormalities in children with RMPP, and using this device may improve the prognosis of patients with this condition.

Reporting Checklist: The authors have completed the STROBE reporting checklist. Available at http://dx.doi.org/10.21037/tp-20-237

Conflicts of Interest: All authors have completed the ICMJE uniform disclosure form (available at http://dx.doi.org/10.21037/tp-20-237). The authors have no conflicts of interest to declare.

Ethical Statement: The authors are accountable for all aspects of the work in ensuring that questions related to the accuracy or integrity of any part of the work are appropriately investigated and resolved. The study was conducted in accordance with the Declaration of Helsinki (as revised in 2013). The study was approved by the Ethics Committee of Children’s Hospital of Fudan University [No. (2016)87] and informed consent was obtained from all patients’ guardians.