Code Blue systems are emergency call and management systems for rapid response in hospitals. A Code Blue can be activated by any healthcare personnel for an individual requiring prompt emergency management (1). Once a Code Blue is activated, a medical team with qualifications of advanced life support (ALS) will respond immediately to reach the locality and initiate resuscitation (1). The term “Code Blue” was first used in the Bethany Medical Center in the State of Kansas in the early 1990s (2). The aim of Code Blue is to ensure that trained personnel are deployed to the patient in the shortest possible time (3,4).

The incidence of in-hospital cardio-respiratory arrest has been estimated to be 1–5 events per 1,000 annual hospital admissions, but the rate of survival of these patients to hospital discharge was 0% to 42% with the most common range being between 15% and 20% (5,6). Although the survival rate of medical emergencies requiring critical care is dependent on the patient’s characteristics and underlying disease (7), this rate can be significantly improved by earlier interventions in terms of cardiopulmonary resuscitation (CPR), defibrillation, and advanced life support (8). The aim of this study is mainly to explore the risk factors of the Code Blue and to improve these factors through team training. The purpose of training is to improve the first aid ability of the team and to further improve the survival rate of the Code Blue. Since 2018, we initiated the Code Blue system in our hospital (Children’s Hospital of Fudan University) with a training process aiming at an improved survival rate for patients who undergo the Code Blue process. We present the following article in accordance with the STROBE reporting checklist (available at http://dx.doi.org/10.21037/tp-20-171).

This is a retrospective clinical intervention study. We reviewed all the patients who received resuscitation after the Code Blue was activated since January 2012. Inclusion criteria: a series of emergencies such as loss of consciousness, convulsions, decreased heart rate, and respiratory arrest, etc., all meet the Code Blue call standards. Exclusion criteria: children with end-stage diseases, parents giving up treatment and other similar factors. At the same time, we compared the death and survival of patients before and after the ALS and PALS life support courses in our hospital. This study passed the ethical review of the unit ethics committee (No. [2020]460) and followed the Helsinki Declaration (as revised in 2013). Because of the retrospective nature of the study, the requirement for informed consent was waived.

A “Code Blue” is defined as any unexpected medical emergency requiring critical care and activation of a hospital-wide alert. The Code Blue system was implemented in our hospital starting in January 2012. Our hospital is a tertiary hospital that sees an average of 220,000 out-patients and 3,750 in-patients per month. The Code Blue system is initiated by a 24-hour centralized alarm-distributing process that is composed of a 30-second indoor announcement over the hospital intercom, identifying the patient’s location immediately after the call is received (broadcast all over the hospital except operation rooms and intensive care units). Subsequently, sequential phone calls (20 seconds each) are made to working cellphones until the following Code Blue team personnel can be confirmed: a senior resident, an emergency nurse, a senior emergency nurse, an attending physician, and an attending physician in the intensive care unit.

All the data came from the health information system. We collected clinical information and prognostic outcomes of children after Code Blue intervention. These materials included: age, gender, diagnosis, time of Code Blue call activation, time between the call and the arrival of the Code Blue team, treatment details and outcome.

A total of 96 people passed the training course and entered the actual conduction of the Code Blue. A total of 71 Code Blue cases were retrospectively studied for the period of January 2016 to December 2017, the early stage before training. These patients were divided into a death group and a survival group. The mean age of the death group (median 29 months, 1–192 months) was significantly younger than that of the survival group (median 24 months, 1–182 months) (P<0.05). The death group had a higher proportion of surgical patients than medical patients (65.7%, P<0.05). More cases occurred in the diagnostic department in the survival group (30.6%, P<0.05). The most common activation recorded was shock, with 48.6% (n=17) in the death group, and it was found to be a risk factor for death by logistic analysis (P=0.014) (Table 3). The mortality rates of Code Blues caused by dyspnea were 22.8% before training and 22.2% after training; those caused by shock were 48.6% before training and 50.0% after training; those caused by convulsions was 2.9% before training and 0% after training; and those caused by arrhythmia were 25.7% before training and 27.8% after training (Table 4). All cases in the death group had CPR and were transferred to the ICU, and the CPR time was longer than that in the survival group. Whether the Code Blue occurred during working hours was not significantly different between the two groups. The time of arrival had a P<0.05, indicating a statistically significant effect on survival (Table 5). Through logistic analysis, we found that age, inpatient status, time of arrival, the time of CPR, and the cause of shock were all risk factors for death (Table 3). 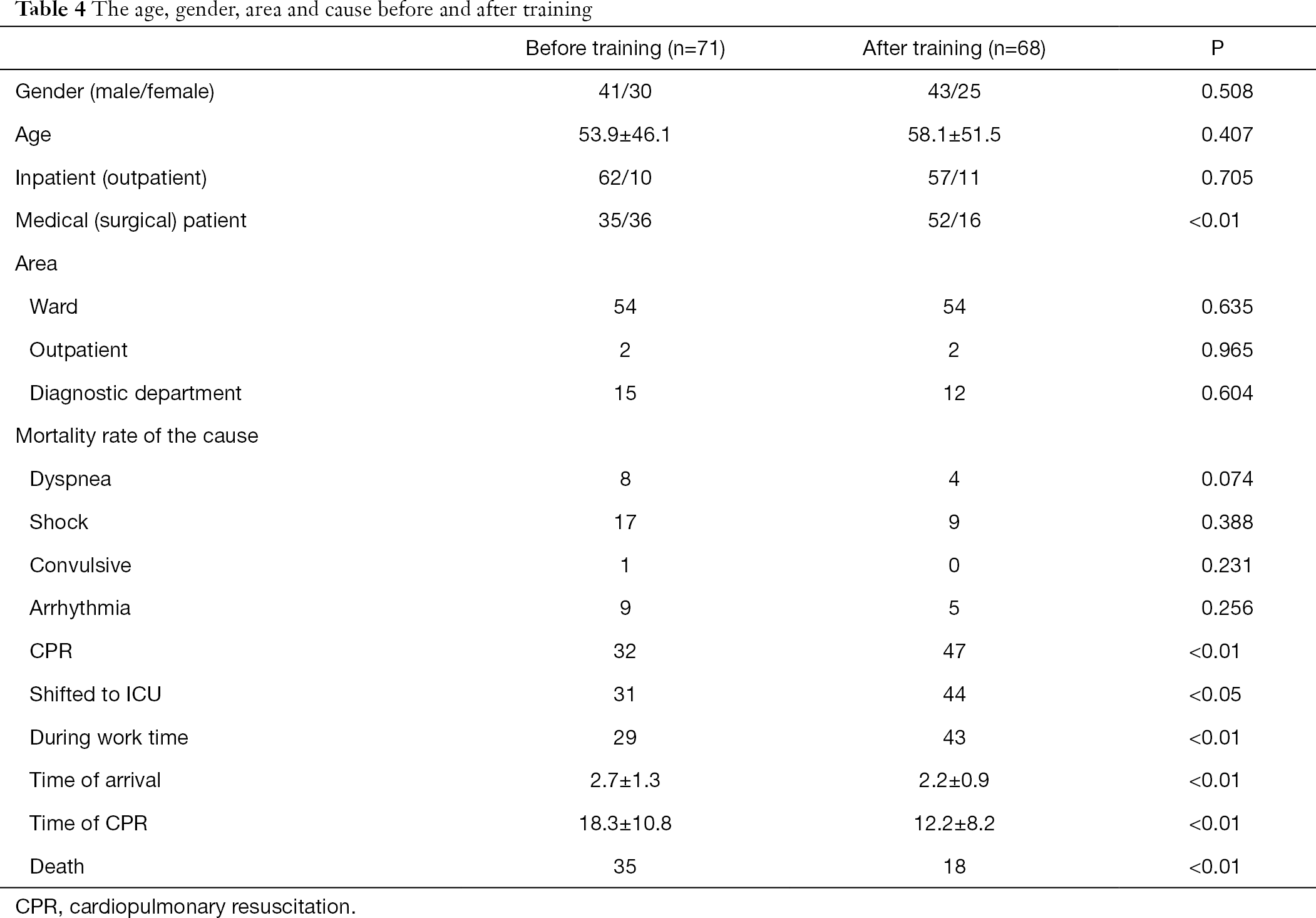 Table 4 The age, gender, area and cause before and after training
Full table 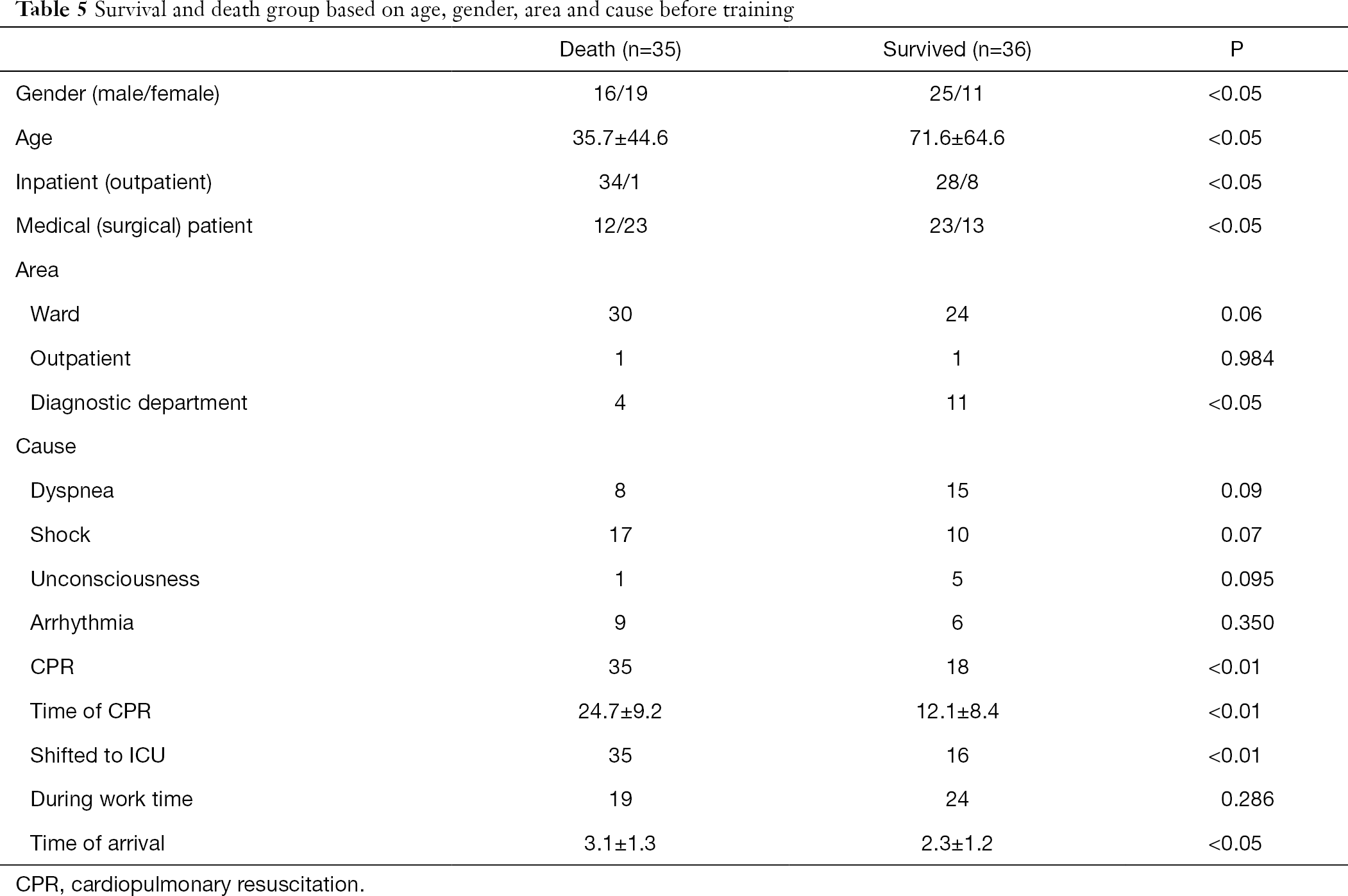 Table 5 Survival and death group based on age, gender, area and cause before training
Full table

By analyzing the survival factors of the Code Blue, we improved it through training. We paid attention to the early recognition of shock in all the patients, especially the inpatients. We trained the team to improve their first aid abilities. After the improvement, we collected the information on 68 cases. There was no statistically significant difference in survival between males and females, age and area. The proportion of Code Blues in surgical departments increased (P<0.01). Arrival time and recovery time were significantly reduced. The proportion of patients shifted to the ICU has increased and the proportion of deaths has decreased (Table 4). Thus, the survival curve after training was improved (P<0.05) (Figure 1). 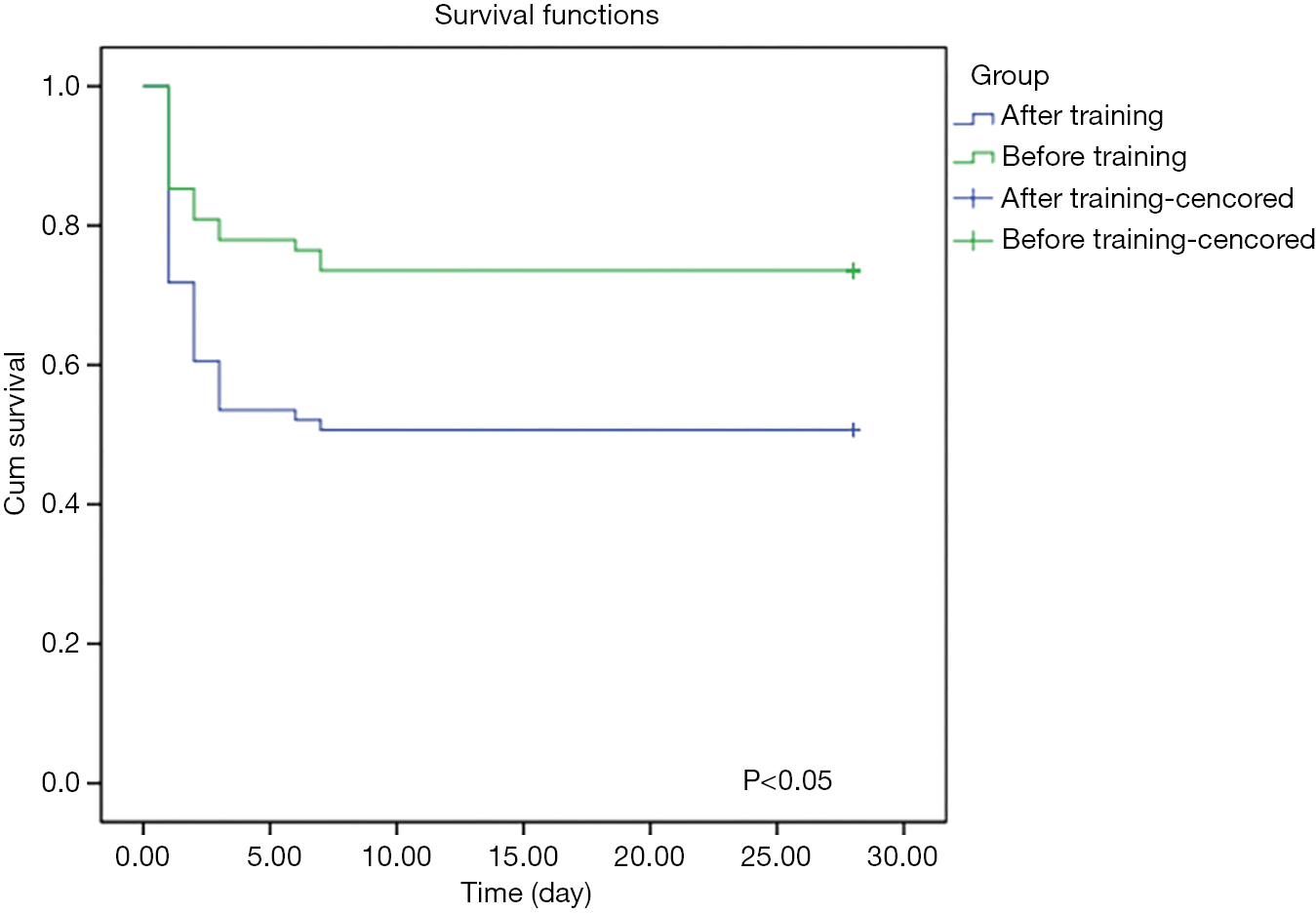 Figure 1 The survival curve before and after training.

We conducted a retrospective case analysis and showed that the time before the Code Blue team reached the patients was inversely associated with survival. Through training, the decreased time of arrival of the Code Blue team significantly improved the survival of patients with unexpected critical illness for whom Code Blue calls were activated.

There have been few studies on the application of Code Blue in children. A few studies found that there are many reasons for Code Blues, such as conversive disorder (26% to 13%), syncope (21.5% to 19.6%), convulsion (17% to 13.7%), hypoglycemia (4.5% to 3.9%), anxiety (4.5% to 1.9%), and cardiac arrest (1.1% to 0%) (2). Cardiac arrest was the main activation criterion, comprising 54.6% cases of Code Blues in adults(10).Compared with adults, cardiac arrest was not the main reason for Code Blues. The wards where Code Blues occurred most frequently in our study were the infectious diseases ward (22.3%), the hematology and oncology ward (21.6%), the cardiology ward (10.8%), the neurology ward (7.9%), and the respiratory ward (7.2%). The top ten basic diseases were influenza, stem cell transplantation, pneumonia, epilepsy, and hepatic insufficiency, among others. In addition to stem cell transplantation, epilepsy, severe pneumonia and hepatic insufficiency, influenza was the first cause of a Code Blue. This finding reminds us that during the flu season, we should evaluate the conditions of children with influenza. In adults, the majority of Code Blue activation patients were male (59%) and aged between 70 and 89 years of age (43%) (10). In children, we found that age was a risk factor for death, with younger age having a greater risk.

The purpose of the Code Blue is to improve the success of CPR, and thereby improve the patient survival rate. The Code Blue includes the establishment of a professional team, maintaining the alertness of the team, technological call systems, preparation until the team arrives, the time to arrival of the Code Blue team, availability of equipment, and effective intervention and post-intervention management and records (11). Our training courses used a series of modularized, standardized, and practical teaching courses combined with theoretical learning, case teaching, skill training, and comprehensive assessment so that medical staff can accurately grasp the first aid theory and achieve improved resuscitation. This course adopts the BLS and PALS training courses of the AHA (9), uses the latest version of standardized teaching materials, and uses video-assisted professors to provide students with professional and consistent theoretical knowledge and establish a good basis for operation. Skill training and simulated cases closely follow the clinical reality, creating a real patient-oriented clinical scene for medical staff, so that trainees can follow the rules when they encounter actual cases. We found that the time of arrival, the time of CPR, and the cause of shock were all risk factors for death in children. Kubra et al. found than the arrival times of the Code Blue teams of children’s hospital ranged from 1 to 5 minutes, which was concordant with the standards, and the mean was 1.57 minutes (2). For the arrival time evaluation, the arrival times of Code Blue teams in our hospital ranged from 1 to 5 minutes, which was concordant with the standards; the mean was 2.3±1.2 minutes in the survived group, less than the death group before training. After the training, the arrival time of the Code Blue teams shortened to 2.2±0.9 minutes. It is clear that the awareness of the Code Blue was improved after education of the hospital staff in our hospital. Education decreased the arrival time of the Code Blue team dramatically (12,13). We also found that after training, the recovery time was significantly reduced. The proportion of patients shifted to the ICU has increased and the proportion of deaths has decreased. It was gratifying that the survival curve improved significantly after training. These changes may be due to improvements in the rescue abilities of the Code Blue team.

Since Code Blue activations do not occur frequently, the study sample was not large, and it is susceptible to children’s primary diseases. The PIM or PRISM score is most commonly used to analyze the severity of illness score in pediatric patients (14). They were not calculated in this study because most of the Code Blues were too rushed and not scored and needed to be improved in the following research. For ethical reasons, historical cases are used for comparison, and the Code Blues may be affected by rising factors at the medical level.

We express our deep gratitude to the patients and the families for their willingness and cooperation in the study.

Reporting Checklist: The authors have completed the STROBE reporting checklist. Available at http://dx.doi.org/10.21037/tp-20-171

Ethical Statement: The authors are accountable for all aspects of the work in ensuring that questions related to the accuracy or integrity of any part of the work are appropriately investigated and resolved. This study passed the ethical review of the unit ethics committee (No. [2020]460) and followed the Helsinki Declaration (as revised in 2013). Because of the retrospective nature of the study, the requirement for informed consent was waived.