The microbial etiology of neonatal sepsis (NS) varies according to the geographical location of hospitals; as such, developing therapeutic interventions is challenging. NS is defined as a systemic infection, usually bacterial, viral, or fungal, that may occur with/without signs and symptoms of infection during the first 4 weeks of life (1). Early-onset sepsis is defined as sepsis occurring less than 7 days of age and often has worse prognosis than late-onset sepsis (≥7 days of age). Despite the improvements in NS treatment strategies, it remains a major threat to the health of neonates, particularly in developing countries (2). Several studies have found changing trend in the bacterial etiology of NS in different periods (3-5). Early identification and treatment of NS are challenging due to variations in the microbial etiology of regions where hospitals are located. Periodic epidemiological surveys of NS can identify commonly encountered pathogens and their antibiotic susceptibility patterns in a neonatal setting.

Antibiotics are the standard therapy for high-risk patients with NS, including preterm infants and those who have ruptured membranes and low body weight. The diversity of organisms causing sepsis changes over time, which poses a challenge for selection of antibiotics for empirical treatment (3-6). Additionally, prolonged antibiotic exposure leads to poor prognosis in neonates. This study focused on determining the causative bacteria and antibiotic susceptibility of early-onset sepsis due to the differences in the etiology between early-onset and late-onset sepsis. Here, we investigated the trend in the etiology of NS and their antibiotic susceptibility pattern over the last decade in our hospital. We present the following article in accordance with the STROBE reporting checklist (available at http://dx.doi.org/10.21037/tp-20-115).

We obtained data on blood cultures of patients with early-onset sepsis (<7 days of age) who were admitted to the neonatal intensive care unit at Children’s Hospital of Soochow University between Jan 2009 and Dec 2018. The cases were divided into two phases, i.e., phase I (2009 to 2013) and phase II (2014 to 2018). Bacterial and demographic data were obtained and compared with microbial databases. The study was conducted in accordance with the Declaration of Helsinki (as revised in 2013). The study was approved by the Clinical Trial Ethics Review Committee of Children’s Hospital of Soochow University (No. 2019LW019) and individual consent for this retrospective analysis was waived.

We collected demographic and microbial data from ward admission and laboratory registers and validated these against the electronic microbial database. Blood cultures of patients who were potentially septic were assessed. The clinical outcome and duration of hospital stay were not assessed. Bacterial colonization data from vaginal swabs and antibiotic therapy during neonate delivery were unavailable. NS was defined as neonates presenting with at least one of the following symptoms: fever (rectal temperature ≥38 °C) or hypothermia (rectal temperature ≤36 °C), white blood cell counts ≥30,000/mm or <5,000/mm or >25% immature cells, convulsions, lethargy, feeding or breathing problem, hypoglycemia, bulging fontanels, vomiting, and jaundice.

Blood was sampled from the peripheral vein under aseptic conditions before antibiotic interventions. Blood (2 mL) was inoculated into the brain-heart infusion broth at 37 °C. Sub-cultures were produced on blood and MacConkey’s agar following 24 and 48 h of growth. Bacterial growth was identified through colony counting, Gram staining, slide agglutination, and biochemical properties. If no growth was evident after 48 h, then the growth period was extended to 7 days before being confirmed as sterile. Mixed bacterial flora or diphtheroid growth represented contamination. Coagulase-negative Staphylococci (CoNS) was considered pathogen only when isolated in paired cultures. All isolates were analyzed. Antimicrobial susceptibility was assessed using Kirby-Bauer disk diffusion method. Data were interpreted based on the criteria of the Clinical and Laboratory Standard Institute. The cultures with aerobic spores were considered contaminated. Gram-positive bacteria were tested against the following antimicrobials: oxacillin, erythromycin, ciprofloxacin, rifampin, linezolid, moxifloxacin, penicillin G, gentamicin, tetracycline, tigecycline, cefoxitin, vancomycin, and levofloxacin. Gram-negative bacteria were tested against the following antimicrobials: amikacin, ampicillin, aztreonam, ertapenem, ciprofloxacin, meropenem, piperacillin, piperacillin/tazobactam, gentamicin, cefepime, cefuroxime, cefoperazone/sulbactam, ceftriaxone, cefotaxime, ceftazidime, cefotetan, cefoxitin, imipenem, and levofloxacin.

The results of the laboratory investigations were recorded in a proforma and analyzed using SPSS version 17.0. Descriptive statistics were used to describe data distribution. Chi-square test was performed for categorical variables. P<0.01 was considered statistically significant. 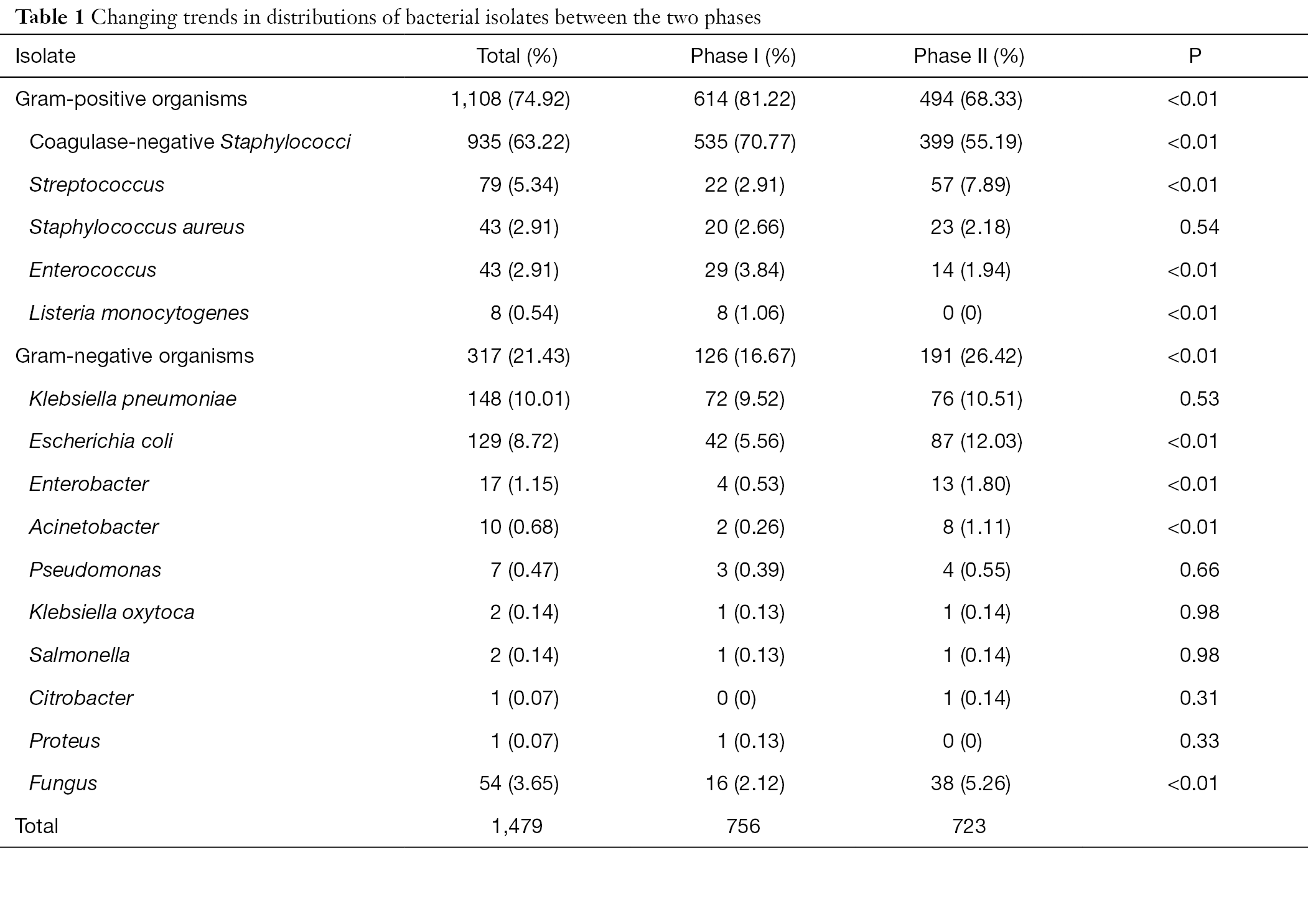 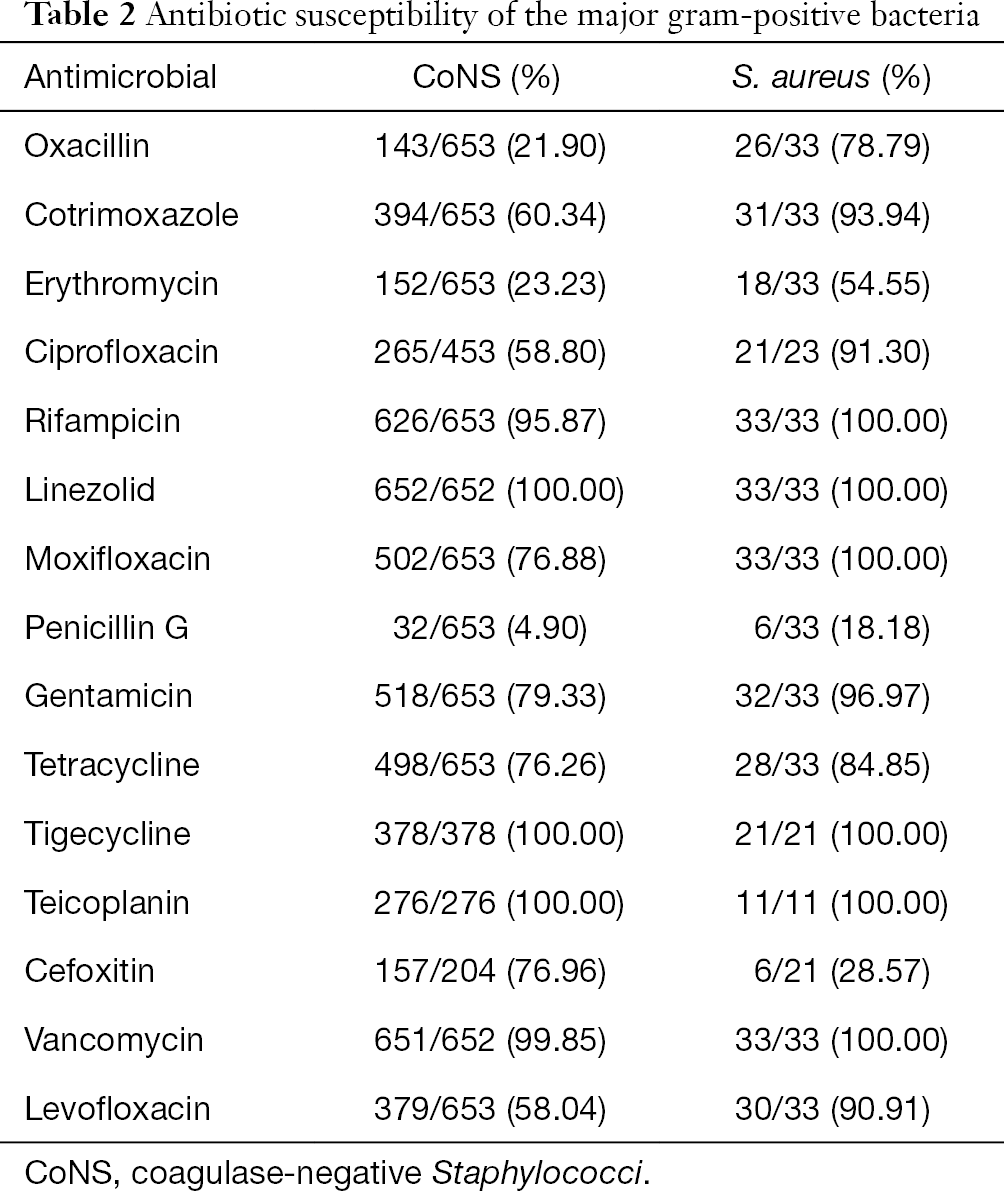 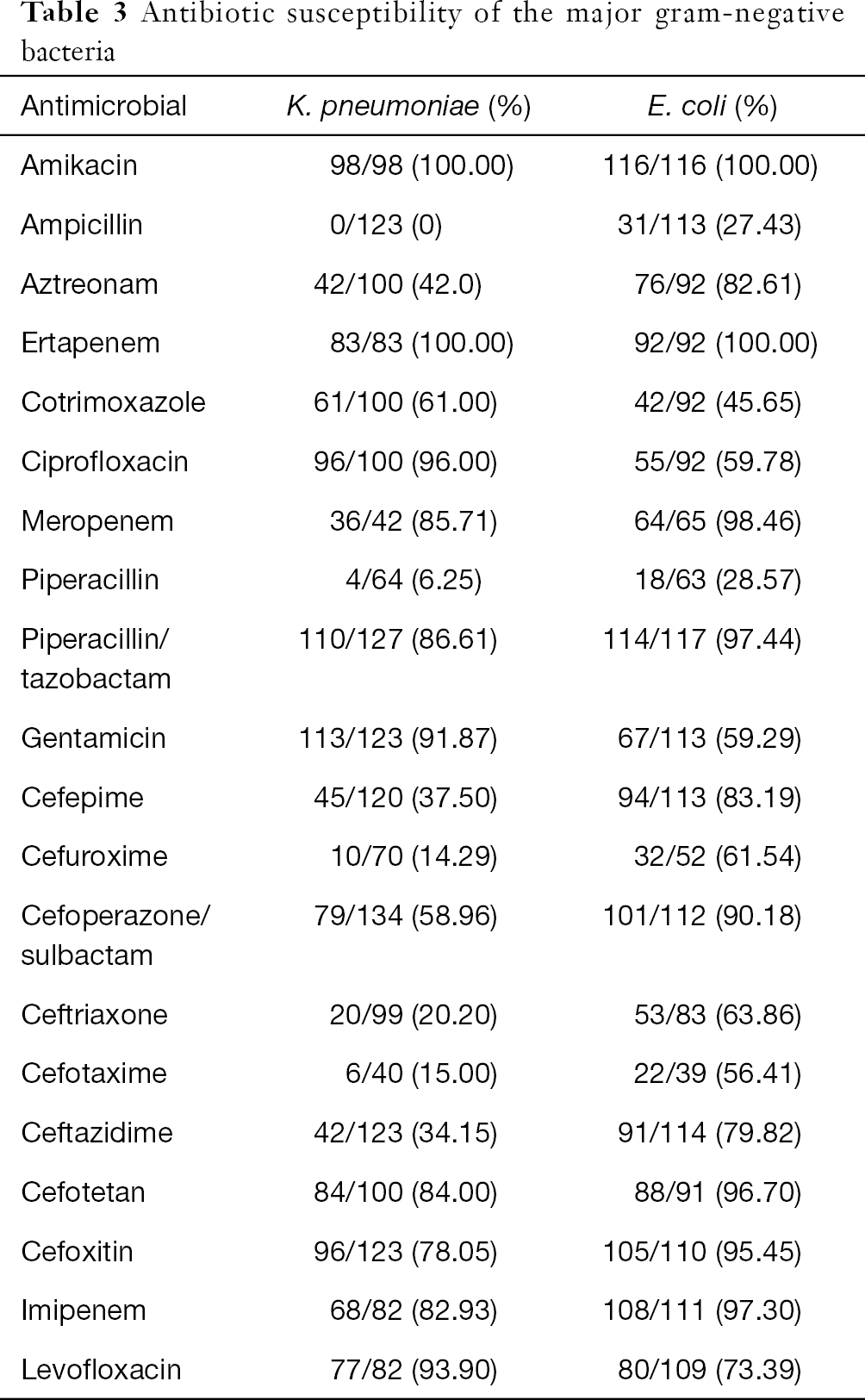 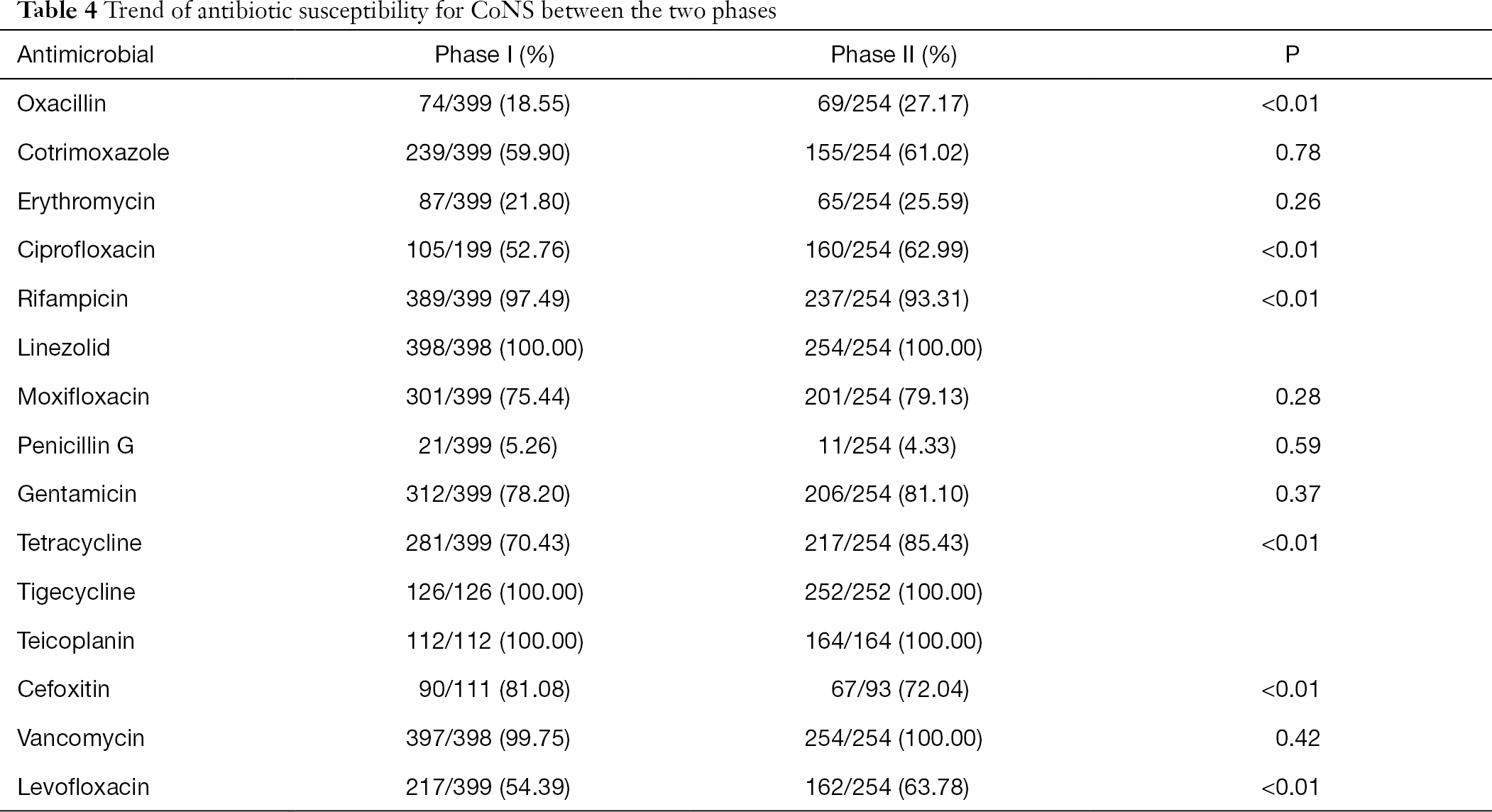 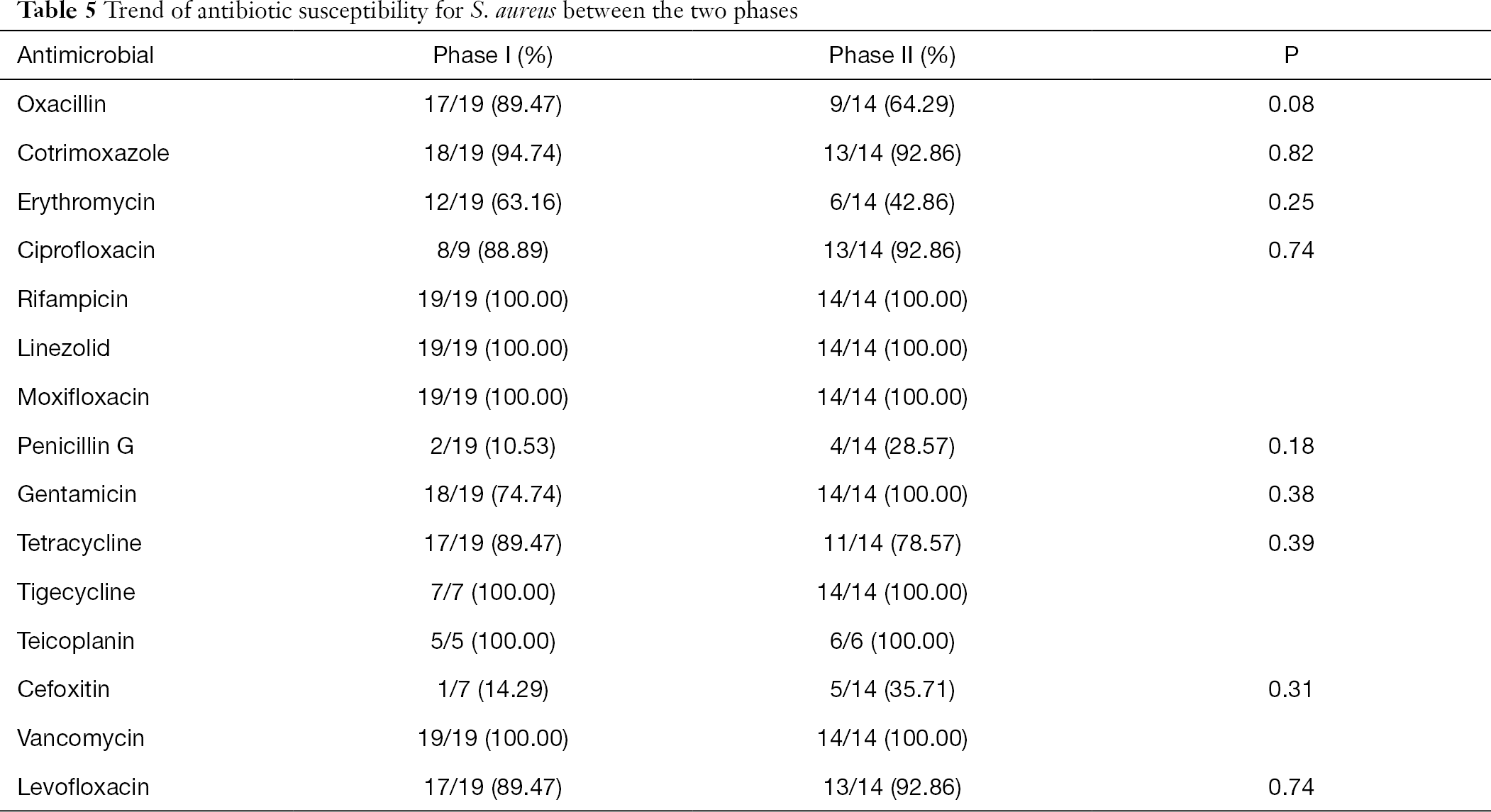 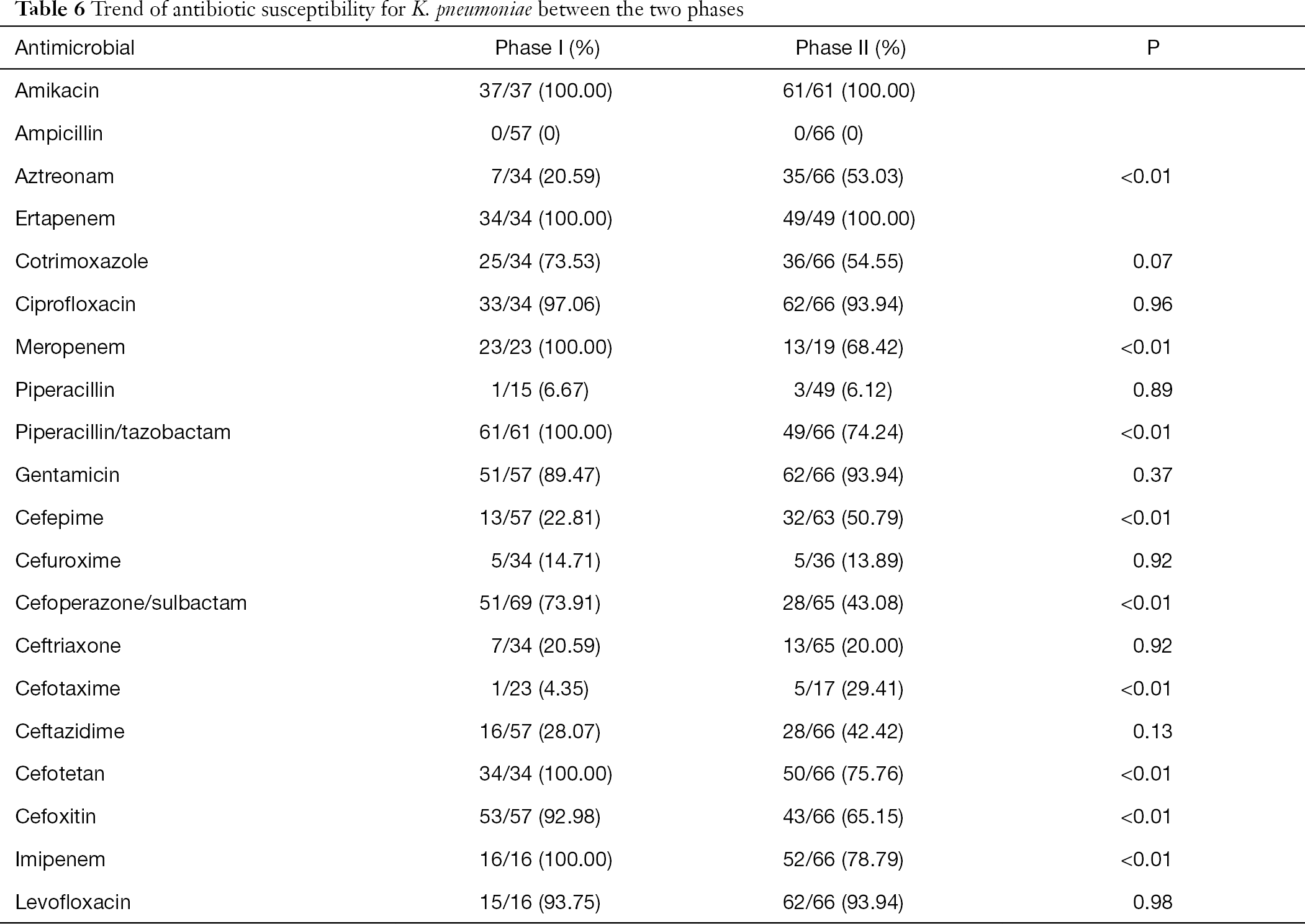 Despite recent advances in health care, morbidity and mortality due to NS remain a major concern in neonates (7). NS may not have specific signs and symptoms; as such, a delay in diagnosis and treatment contributes to higher morbidity and mortality. Sepsis-related mortality is preventable with time-sensitive empiric antibiotic therapy, which is decided based on the periodic epidemiological survey of local bacterial flora and their antibiotic susceptibility patterns. Causative organisms vary in different regions. Therefore, epidemiologic studies are of great importance in each region. This study retrospectively analyzed the blood culture of positive cases of early-onset sepsis to determine the changing trends of causative bacteria and antibiotic susceptibility in the past decade.

Previous studies emphasized the pivotal role of Gram-negative bacteria, such as E. coli and K. pneumoniae, as NS-causing pathogens (8-10). However, the main NS-causing pathogens, based on reported cases in China, were Gram-positive organisms (11). In the present study, Gram-positive bacteria were more common than Gram-negative bacteria during phases I and II. However, we observed a significant decrease in the number of Gram-positive bacteria during phase II. This decrease was mainly attributed to the decrease in CoNS and the increase in E. coli. Although the proportion of CoNS decreased over time, it remained the major pathogen, consistent with previous study (12). Identifying CoNS is often challenging because most CoNS-positive blood cultures are deemed contaminated (13,14). CoNS cause NS when medical devices penetrate the skin and mucosal barriers. The increasing use of invasive medical devices, including central venous catheters, has increased the prevalence of this strain. The National Institute of Child Health and Human Development Neonatal Research Network published specific criteria to define CoNS sepsis (15). Two positive blood cultures are required to diagnose culture-proven sepsis. In the present study, patients with CoNS had positive paired blood cultures and were clinically symptomatic for sepsis, confirming the absence of contamination. The decline in the number of CoNS was probably due to improvements in aseptic and disinfection procedures. No significant differences in the number of S. aureus were found between the two phases. Furthermore, the proportion of Streptococcus species increased, which was contradictory to previous reports (16). Our study also demonstrated a significant decrease in the proportion and frequency of Enterococcus species. For Gram-negative organisms, K. pneumoniae was the predominant species initially in phase I but was replaced by E. coli in phase II. Meanwhile, the proportion and frequency of Enterobacter and Acinetobacter were significantly higher in phase II than those in phase I. These findings indicate a paradigm shift in the etiology of NS in recent years.

We also detected a significant change in the susceptibility to antibiotics during the last decade. Our results revealed that Gram-positive bacteria exhibited the highest resistance to penicillin, oxacillin, and erythromycin and remained sensitive to vancomycin, tigecycline, and teicoplanin. CoNS exhibited approximately 90% resistance toward penicillin and oxacillin. Based on the results, the use of ampicillin, penicillin G, and first or second-generation cephalosporins, which were previously recommended as empiric antibiotics for the treatment of NS, is probably unnecessary due to their extremely low sensitivity. The WHO recommends first-line antibiotics, including ampicillin and aminoglycosides, for the treatment of NS (17,18). However, ampicillin showed alarming resistance in the present study. Meanwhile, considering the extensive use of third-generation cephalosporines, we observed high antimicrobial resistance among Gram-positive and Gram-negative bacteria, including rapid resistance in K. pneumoniae during phase II. The susceptibility to β-lactamase inhibitors also significantly decreased in K. pneumoniae during phase II. A hospital used fluoroquinolones to treat Gram-negative infections until β-lactam plus β-lactamase inhibitors were available for management due to the high resistance observed to these antibiotics (19). This study found that Gram-negative bacteria remained highly sensitive to quinolones throughout the study period. Therefore, the therapeutic role of fluoroquinolones may gain considerable importance in the future.

Zaidi et al. (17) reviewed 11,471 blood cultures from developing countries in South-East Asia and recommended imipenem and amikacin for the initial treatment of suspected sepsis in hospitalized neonates. Amikacin is effective against Gram-negative bacteria but is rarely used for NS because it can cause kidney and ear-associated toxicity (11). In the present study, the carbapenem-resistance significantly increased in K. pneumoniae during phase II. The reduced susceptibility to meropenem and imipenem was attributed to their over-prescription in this population, emphasizing the importance of third-generation cephalosporin therapy for these patients. The proportion of E. coli significantly increased during phase II and showed a notable resistance pattern. E. coli was resistant to ampicillin and sensitive to cefoperazone/sulbactam, piperacillin/tazobactam, cefotetan, and cefoxitin, all of which are commonly administered antibiotics. According to our findings, the resistance of E. coli against cephalosporins remained relatively unchanged over the last decade. This change in the sensitivity pattern of antimicrobials could be attributed to the fact that microorganisms tend to become resistant to commonly used antibiotics while remain sensitive to the rarely used ones.

In recent years, microbial profiles in NS have significantly changed, including a reduction in CoNS and an increase in E. coli. An increasing trend of antibiotic resistance to commonly used and available drugs has been observed. The resistance toward carbapenems has considerably increased. Antibiotic susceptibility patterns should be assessed in different phases. Each hospital should implement a unique antibiogram program that assesses options for empirical antibiotic therapy. This study had certain limitations, most notably the lack of correlation of our findings to clinical features and the limited representativeness of the sample. However, efforts to change the bacteriological profiles and antibiotic susceptibility patterns over 10 years and the large sample size were the strengths of the study.

We thank the contributions of nurses at the Children’s Hospital of Soochow University, in providing pathogens and, the collection of specimens. We also thank the support of the colleagues of the Department of Microbiology in our hospital.

Reporting Checklist: The authors have completed the STROBE reporting checklist. Available at http://dx.doi.org/10.21037/tp-20-115

Conflicts of Interest: All authors have completed the ICMJE uniform disclosure form (available at http://dx.doi.org/10.21037/tp-20-115). The authors have no conflicts of interest to declare.

Ethical Statement: The authors are accountable for all aspects of the work in ensuring that questions related to the accuracy or integrity of any part of the work are appropriately investigated and resolved. The study was conducted in accordance with the Declaration of Helsinki (as revised in 2013). The study was approved by the Clinical Trial Ethics Review Committee of Children’s Hospital of Soochow University (No. 2019LW019) and individual consent for this retrospective analysis was waived.