Noise is a hazard for newborns (1). Preterm infants are more vulnerable to negative effects of noise because their auditory system is at a critical period of neurodevelopment. High intensities of noise have several negative effects on preterm newborns, such as fluctuations in heart rate and respiratory rate, desaturations, blood pressure instability, impaired sleep pattern, neurosensory hearing loss and delayed growth (2-4). In 1997, the American Academy of Pediatrics (AAP) determined that safe sound levels in the Neonatal Intensive Care Unit (NICU) should not exceed 45 dB (1), which has rarely been achieved (5,6).

Sound amounts correlate with the level of NICU (7). Previous research assessing the sound environment has not differentiated between the levels of neonatal units, even not identifying the level studied (7). Very preterm small infants are often transferred from Level III to Level II units once their vital signs are stabilized without ventilator support. Other than mechanical ventilators, the environment in a Level II unit is also filled with monitor alarms, equipment noises, staff voices, and crying infants. Only one study published to date has measured the noise level in a Level II unit; that study reported a mean of approximately 49 dB, but no implementation was applied for the purpose of noise reduction (7).

We conducted this study to create a more developmentally friendly, less noisy environment in our Level II unit where very preterm small babies spend most of their first months. The objectives of this study were to (I) describe the noise environment in our Level II unit, (II) evaluate the noise level in accordance with AAP recommendations, (III) assess the utility of a bundle of noise reduction methods in reducing sound levels, and (IV) investigate the role of noise supervisors in ensuring the compliance of the modification.

We predicted that baseline noise amounts in our Level II unit would exceed the recommended amount of 45 dB prior to interventions. We hypothesized that the noise reduction bundle would effectively reduce sound levels in our Level II neonatal care unit.

This prospective study was performed from January 20th to August 11th in 2015. The 2-phase study took place in one preterm room of a 150-bed Level II neonatal care unit at Children’s Hospital of Fudan University, China. The study unit consists of two large preterm rooms (maximum 18 beds per room, average 15 beds during the study period). The residents’ work areas were close to the patient care areas, as shown in Figure 1. 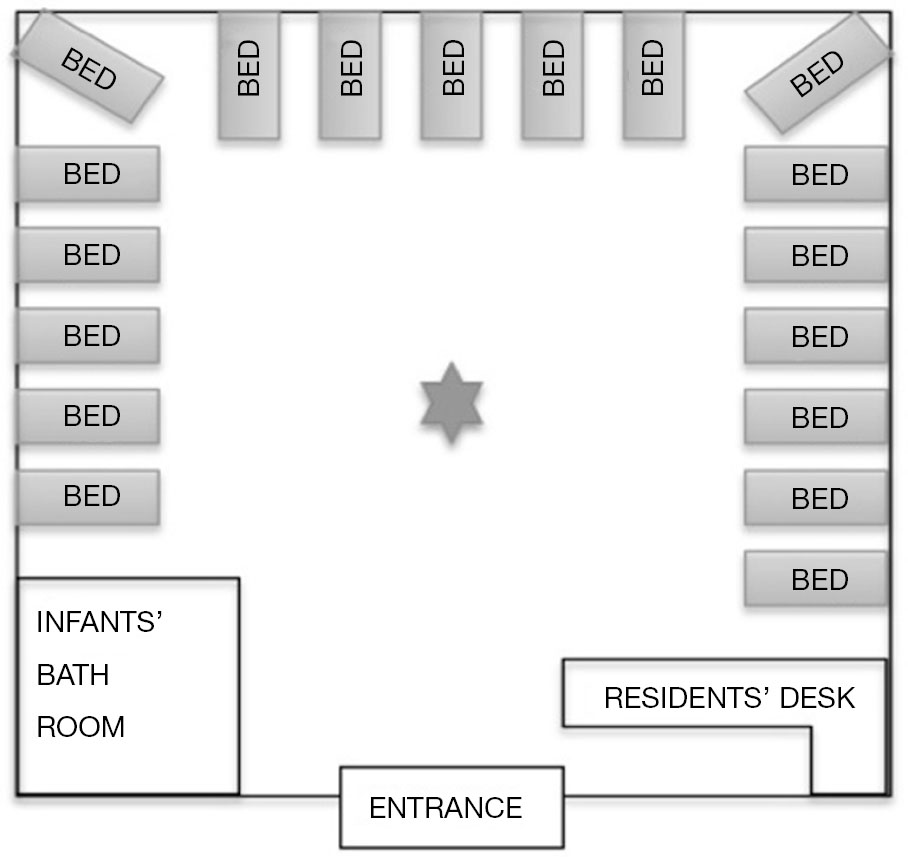 Figure 1 Preterm room with the noise meter location denoted by the star symbol.

Preterm newborns in the study unit were frequently cared for in DAVID YP-900 incubators (David Medical, Ningbo, China). Incubators were routinely covered with blankets to reduce light and sound exposure, other than that there were no formal procedures to manage noise levels prior to this study. The study was conducted in accordance with the Declaration of Helsinki (as revised in 2013). The study was approved by the Research Ethics Committee of the Children’s Hospital of Fudan University (No. 2015-86). Participants gave informed consent before taking part.

Between Phase 1 and Phase 2, meetings were held by all the research members to determine the major contributing factors for the high sound levels and to set up a noise reduction bundle according to the literature published and the reality of the unit. The bundle consisted of the following measures (1,9-14):

Table 1 shows the sequential environmental and incubator noise level measurements of the preterm room before the implementation of the noise reduction bundle. The mean noise levels within incubators were 6.2 dB (±1.15) lower than those in the environment during the 24-hour period (P<0.001). 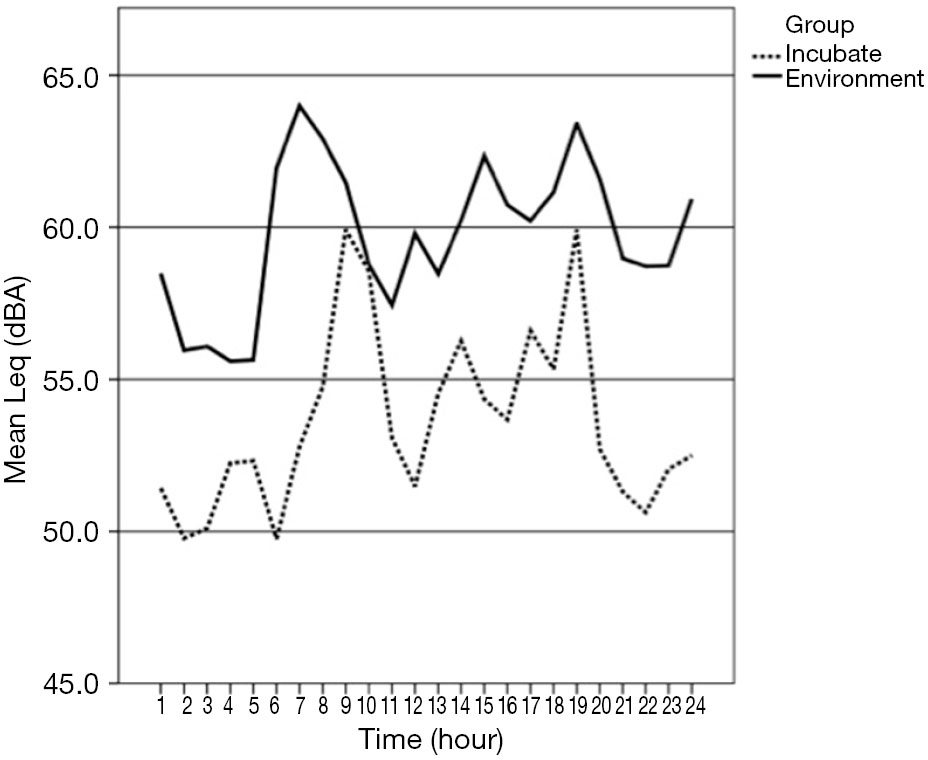 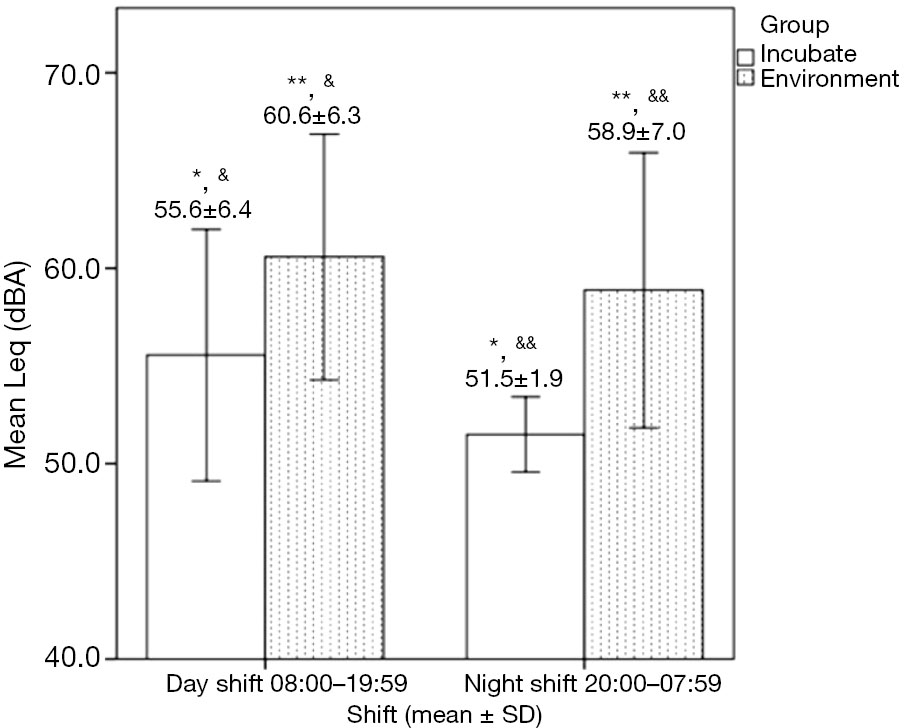 Moreover, the sound levels in the incubator remained <45 dB most of the time except for the major three-time windows recognized in Phase 1, as shown in Figure 4. 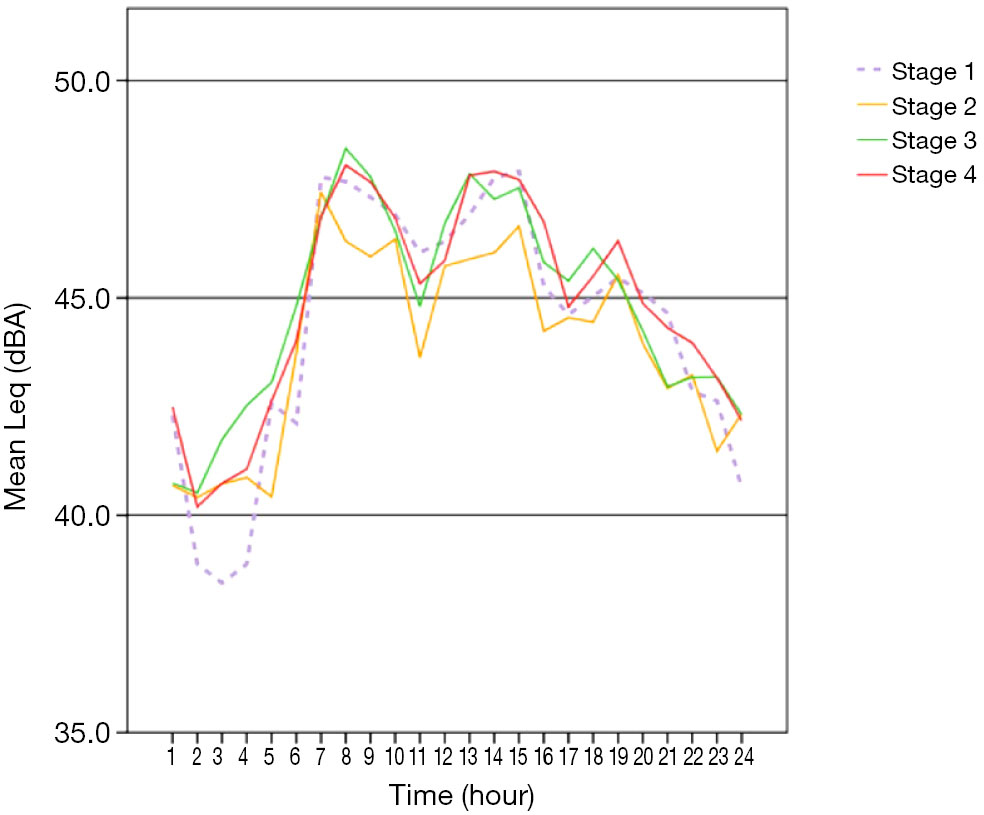 The change in the noise reduction was most significant (–4.1 dB) in Stage 1 during the day shift (Figure 5). A minor trend of decline in sound levels inside the incubator was observed from Stages 1 to 2 (P=0.057), with a rebounding occurring in Stage 3 but stabilizing until Stage 4, suggesting the role of noise supervisors in ensuring compliance with the modification (Figure 4).

Similar to other studies, 24-hour baseline sound levels in our Level II unit are generally high and consistently exceed the AAP’s recommendation prior to the reduction bundle. The noise level during the day shift was higher than that during the night shift. This is comparable to the results of Hassanein et al. (12). The noise level inside the incubator was 6.2 dB lower than that outside but was consistently above 50 dB. Even though AAP’s recommendation is rarely achieved globally (5,6), the baseline noise level in our unit was of concern regarding the adverse impact on the central neural system of fragile preterm infants. Different from the reported study units, our preterm room is larger and busier, with an average of 15 beds during the study period, contributing to the elevated baseline sound level and the difficulty in noise control.

Although a considerable reduction in noise levels was achieved inside the incubator in Phase 2, noise levels continued to be above the recommended amounts of 45 dB in three-time windows. For the first- and second-time windows, handover was the major contributing factor for the high noise level. Studies have shown that conversations during rounds contributed significantly to the excess noise levels with considerable reduction in noise levels after activity modification (12,15). Wang et al. set the sound-activated noise meter threshold to 50 dB and found that the implementation of the meter seemed effective in reducing sound levels in the patient care areas (16). We introduced noise meters providing direct audit and visual feedback in the study room, aiming at reminding people in the room to follow the bundle strictly. The efficacy of the sound-activated noise meters in our unit required further evaluations.

The residents’ and nurses’ daily working areas were restricted to the same room. They wrote electronic medical records, admitted or discharged patients, and answered phone calls in the afternoon. Given that, it was important to move their working area outside the preterm room. Residents were encouraged to do the electronic paperwork outside the room on the movable computers, have conversations with the parents far from the preterm room and respond to the phones quickly.

Because the measurement was unmasked to the staff on duty, they could have consciously or unconsciously followed the bundle. However, methods to mask the staff are probably impractical. Previous research had not evaluated the role of noise supervisors in assuring the compliance of modification. In our study, two research nurses were given the duty of reinforcing these measures regularly to ensure the compliance of the modification during the first stage of Phase 2. Sound levels remained lower under close monitoring by the research nurses but rebounded gradually under no monitoring. These results indicated that staff on duty could do better if they were aware of the necessity of noise control issues. At the very beginning of the modification, noise supervisors are essential to guarantee staff compliance. However, staff persons working in the preterm room are encouraged to remind each other of the bundle by themselves. Combined with the effect of the noise meter, the reduction in our Level II unit will remain lower and achieve the recommended sound amount.

The noise reduction bundle has been proven to be effective in decreasing the hourly mean Leq in the incubator in our Level II neonatal care unit. Noise supervisors are necessary to ensure the compliance of the bundle. These findings may be helpful to many busy and noisy Level II neonatal care units in developing countries for the purpose of noise control. Noise reduction solutions focusing on the three-time windows, the effects of the interventions on neonatal vital signs and those of their parents, and the long-term impact of the bundle on former patients after they leave the unit are topics that merit further study.

We would like to thank all the nursing staffs, neonatologists, residents, medical students and workers at Children’s Hospital of Fudan University Neonatal Department for their cooperation and kind support.

Funding: This study was supported by a research grant from Shanghai government, China (2013ZYJB0015).

Conflicts of Interest: All authors have completed the ICMJE uniform disclosure form (available at http://dx.doi.org/10.21037/tp-20-147). The authors have no conflicts of interest to declare.

Ethical Statement: The authors are accountable for all aspects of the work in ensuring that questions related to the accuracy or integrity of any part of the work are appropriately investigated and resolved. The study was conducted in accordance with the Declaration of Helsinki (as revised in 2013). The study was approved by the Research Ethics Committee of the Children’s Hospital of Fudan University (No. 2015-86). Participants gave informed consent before taking part.