Preterm birth [(PTB), delivery before 37 weeks in humans] is the leading cause of neonatal mortality and morbidity, with an incidence between 5-12% (1). In Suzhou, the incidence is 6%. Etiology is complex, including environment and genetic factors involved in both maternal and fetal aspects. Many studies revolved that both maternal and fetal genetic factors contributed to gestational age (2-4). PTB has significant genetic contributions that genetic factors account for 25-40% of variation in gestational duration (5). Recent PTB large-scale genetic studies were published (6). Identifying genetic contributions will help to genetic screening tests and to predict to PTB.

Folic acid metabolism is closely related to many important genetic and epigenetic pathways. It can affect DNA synthesis, amino acid metabolism, methyl donor contents, homocysteine (Hcy) concentration that could give rise to congenital heart disease (CHD) (7) and PTB. Folate deficiency during pregnancy is one of the risk factors for anaemia, low birth weight and PTB. In a cohort of 34,480 singleton pregnancies, preconceptional folate supplementation is associated with a 50-70% reduction in the incidence of spontaneous PTB (8). Growing evidences show that polymorphisms of genes related to folic acid metabolism pathways are involved in PTB. In recent years, several studies focus on association study of single nucleotide polymorphisms (SNPs) with folic acid metabolism and it is reported that SNPs in the coding sequence of several genes are associated with PTB (9-12).

Methylenetetrahydrofolate reductase (MTHFR) is an enzyme mainly involved in folic acid metabolism pathways responsible for the conversion of 5,10-methylenetetrahydrofolate to 5-methyltetrahydrofolate, the predominant form of folate in plasma involved in DNA methylation pathways or purine synthesis (13). Polymorphisms locating in the exons of this gene can result in the transition of amino acid that finally lead to the reduction of enzyme activity. For instance, common polymorphism 677C > T homozygous variant can reduce its activity by 70% compared with wild type (14). Chen et al.’s study shows that the infant MTHFR CT and TT genotypes are responsible for mother’s PTB and low birth weight (15). At present there are few reports of the association of genetic variation at non-coding area including 3'-untranslated region (3'-UTR) of MTHFR with PTB. 3'-UTR, a non-coding region of mRNA, is a target of microRNA (miRNA). miRNAs can regulate the genes translation through sequence-specific binding to 3'-UTR, thus will result in inhibition of translation or degradation of target mRNAs which can reduce the activity of enzyme (16). Recent studies show that polymorphisms in miRNA and 3'-UTR are related with tumors synthesis (17-19) and CHD (7).

We selected three SNPs at 3'-UTR of MTHFR that may disrupt binding capacity of miRNA using miRNA prediction tools (miRnadb, TargetScan and PicTar). Then we performed genotyping of the three SNPs in a case-control study of PTB to identify whether or not they were involved in the susceptibility to PTB.

A total of 1,135 subjects were enrolled with informed consent, including 480 cases of preterm babies and 655 normal in-term babies who were born in the Suzhou Maternal-child Medical Center from 2012 to 2013. DNA from all samples was extracted from blood spots using NP968 automatic nucleic acid extraction apparatus (Xi’an Tianlong Science and Technology Co. Ltd., China), which was originally used for neonatal screening for inborn errors of metabolism. The study was approved by the Ethic Committee for Human Research, Suzhou Hospital Affiliated to Nanjing Medical University.

To understand the potential role of SNPs in genes involved in folate metabolism in PTB, three candidate SNPs in MTHFR were genotyped using the SNaPshot method. The protocol for the SNaPshot method has been published elsewhere and was used with some modifications (23,24). The primers were synthesized by the Shanghai Genearray Company in China. The primers were synthesized by the Genearray Company (Shanghai, China).

We screened three candidate SNPs (rs45451599, rs1537515 and rs1537516) at 3'-UTR of MTHFR to determine their association with PTB in 480 PTB babies and 655 term babies using the SNaPshot method. All SNaPShot extension primers were designed in the reverse orientation of NCBI Reference Sequence NC_000001.10. Mutations are shown in B and C marked with an asterisk. There were 281 male and 199 female infants in the PTB group, and 379 male and 276 female infants in the control group. The P value of infants’ gender was 0.842. The genotype frequencies of the three SNPs were in agreement with Hardy-Weinberg equilibrium. Data regarding genotype distributions of three SNPs and χ2 analysis is shown in Table 1. There are mutation frequencies in two SNPs (rs1537515 and rs1537516) showed significant differences between PTB group and control group, 17.9% (117/655) GT heterozygote of rs1537515 were found in the control group, which was significantly higher than that in the PTB group [12.7% (61/480)], suggesting that GT heterozygote of rs1537515 may be a protective factor for PTB (OR: 0.65; 95% CI, 0.46-0.91; and P=0.012). Similarly, CT heterozygote of rs1537516 may be a protective factor for PTB. However, we found genotype distribution of rs45451599 showed no significant differences between the PTB group and the control group, although the AG heterozygote of rs45451599 was 2.6% in the control group, higher than that in the preterm group (1.9%), which suggested that this SNP has no correlation with PTB. 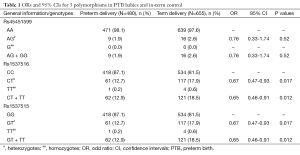 It is reported that preconception supplementation of folic acid can make spontaneous PTB 50-70% reduction in the study of 34,480 pregnant women (8). But its potential pathogenic mechanism is unknown. The molecular epidemiological studies have confirmed that SNPs in folic acid metabolism related genes lead to reduction of the enzyme activity and thus explain the individuals carrying the SNPs with susceptibility to PTB. MTHFR is a key enzyme for intracellular folate homeostasis and metabolism. It is reported that two common MTHFR polymorphisms, MTHFR-677C > T and MTHFR-1298A > C, may be associated with PTB by decreasing the production of the enzyme of MTHFR (12,15). However, these studies focused on SNPs in the coding region and non-coding region have been largely ignored.

It has been proposed that 3'-UTR sequence is recognized via transcriptional and post-transcriptional regulatory pathways. This regulatory region plays an important role in the control of genes expressions. Many recent studies on 3'-UTR function have been reported, and SNPs at 3'-UTR are predicted to play roles in gene expression (25,26) and susceptibility of diseases (27-31), especially in CHD (22). As CHD and PTB shares common folic acid metabolism pathways, it is necessary to research PTB and 3'-UTR. But to our knowledge, there is few articles focusing on the role of MTHFR 3'-UTR in PTB. In that sense, it is necessary to extend from MTHFR coding region to non-coding area. In this article, we analyzed the association between three SNPs locating at 3'-UTR in MTHFR and PTB.

The 3'-UTR of MTHFR has solid predictions for extremely conserved miRNA binding sites, so SNPs in the miRNA target sites may have influence on the gene expression (32). rs1537515 is one of the SNPs in the miRNA target sites, locating in the binding sites of hsa-miR-1224-3p and miR-3150-5p according to software predictions. Based on its special position, rs1537515 attracts us to research its effect on PTB, although there is no study on the association between those miRNAs and MTHFR expression. Firstly, we analyzed genotyping distributions of rs1537515 in Han Chinese population, and the results revealed that the genotyping distributions of rs1537515 were GG 81.5%, GT 17.9% and TT 0.6%. The frequencies of the heterozygous genotype GT of rs1537515 was 12.7% in PTB group, significantly lower than 17.9% in control group. The results indicated that GT of rs1537515 was a protective genetic factor for PTB. As expected, the comparison of allele frequencies showed that wild allele played the leading role. Although, it’s unknown that how to protect from PTB by GT of rs1537515, it gives a new clue to the study of genetic susceptibility to PTB.

Rs45451599 is in miR-24 binding site, however, no significant differences in rs45451599 genotypes were observed among the PTB babies (9/480, 1.9%) and controls (16/655, 2.6%). This may be the result of the small number of AG variants in this case-control study in Han Chinese populations, reducing the power necessary for detectable differences. However, further studies should be performed in different ethnic groups to confirm this result.

In conclusion, this research reveals an association between SNPs at 3'-UTR of MTHFR gene in folate metabolic pathways which may affect the binding capacity of hsa-miR-1304-3p, miR-1224-3p and miR-3150-5p and subsequently increases folate pools and involves in the prevention of PTB. But further functional study should be done for confirmation the significance of these two SNPs in folate metabolic pathways.