Tacrolimus is a macrolide produced by Streptomyces tsukubaensis, and is a powerful immunosuppressant that was first discovered in 1984 when seeking novel anti-cancer and immunosuppressive drugs (1). Since 1994, tacrolimus has been approved as a prophylactic for organ rejection following a liver transplant in the United States (1). At present, in addition to preventing graft rejection during renal transplant (2), heart transplant (3), lung transplant (4), hematopoietic stem cell transplant (5) and other types of transplants, tacrolimus has also been used to treat a variety of diseases, which include systemic onset juvenile idiopathic arthritis (6), nephrotic syndrome (7), myasthenia gravis (8), ulcerative colitis (9), systemic lupus erythematosus (10), lupus nephritis (11) and autoimmune hepatitis (12). However, with a narrow treatment window and considerable pharmacokinetic variability between individuals, it is difficult to determine the optimal tacrolimus concentration within the window of treatment (13). Furthermore, low concentrations of tacrolimus can increase the risk of rejection, whereas high concentration can lead to adverse reactions, including nephrotoxicity, neurotoxicity, infection, nausea, tumors, diabetes and gastrointestinal reactions (1,14). Therefore, in clinical practice, subsequent doses are usually adjusted according to the range of the treatment window combined with therapeutic drug monitoring (TDM). However, determining the optimal initial dose remains difficult as there is no previous TDM concentration for comparison. In clinical practice, the initial dose is based on the drug instructions and the experience of physicians and pharmacists; however, this frequently results in a sub-optimal initial dose.

Fortunately, population pharmacokinetic models and Monte Carlo simulation can be used to assist in optimizing the initial dosage (15,16). Since the initial clinical use of tacrolimus, several population pharmacokinetics models based on patients receiving a liver transplant have been built (17-22). However, the precise treatment of tacrolimus and a model for the recommended initial dose in Chinese patients undergoing pediatric liver transplants has not been determined. Thus, the present study built a model to determine the initial dose of tacrolimus for Chinese patients undergoing pediatric liver transplantation based on population pharmacokinetics and pharmacogenomics. We present the following article in accordance with the TRIPOD reporting checklist (available at http://dx.doi.org/10.21037/tp-20-84).

Data on Chinese children who underwent a liver transplant and were treated with tacrolimus between September 2014 and October 2019 at the Children’s Hospital of Fudan University were collected retrospectively. Partial basic clinical data of children were gathered from previous studies (23,24). The present study was conducted in accordance with the Declaration of Helsinki (2013 revision) and was approved by the Ethics Committee of the Children’s Hospital of Fudan University (Ethical code: [2019] 020). Demographic data of patients and drug combinations were collected. The present study was performed retrospectively, and only used leftover or discarded specimens. Therefore, the need for written informed consent was waived by the Ethics Committee of Children’s Hospital of Fudan University.

Pharmacokinetic parameters and the other continuous covariates or categorical covariates were described with Eqs. [5] and [6], respectively.

Data on 12 Chinese patients who underwent pediatric liver transplantation, including 8 boys and 4 girls, age range from 0.47–7.96 years was used in the present study. Demographic data of patients and drug combinations are shown in Table 1. Partial basic clinical data of some children were gathered from previous studies (23,24). Pharmacogenetics data as well as the Hardy-Weinberg equilibrium test results are shown in Table 2. Pearson χ2-test P>0.05, showing Hardy-Weinberg equilibrium of genotypes from the present study were representative of the general population. 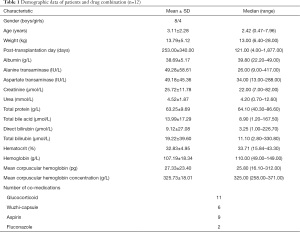 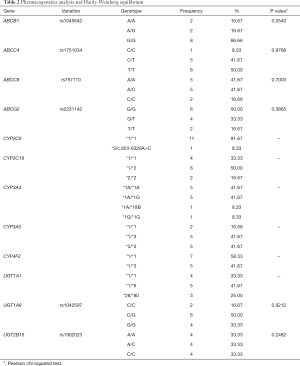 The final population pharmacokinetic models were as follows: 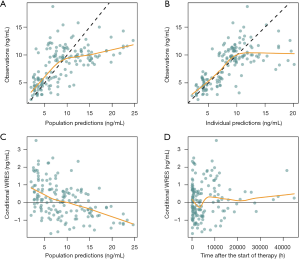 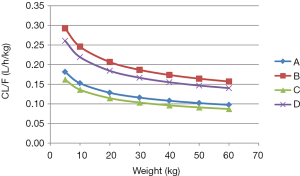 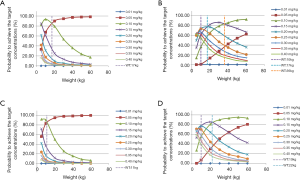 Tacrolimus exhibits low oral bioavailability (10–20%), but this varies notably between individuals, due to intestinal P‐glycoprotein efflux and intestinal and hepatic CYP3A-mediated metabolism (27). Human CYP3A is present in at least two heterogeneous expression isoforms, CYP3A4 and CYP3A5, of which, CYP3A5 is the most important metabolic enzyme with regard to tacrolimus (28).

In our study, weight, CYP3A5 genotype, and coadministration with WZ were incorporated into the final model. It has been shown that a Chinese medicine, WZ, which includes schisantherin A, schisandrol B and schisandrin (29), has a notable effect on tacrolimus and can increase the effective tacrolimus concentration (30-32) by inhibiting CYP3A which metabolizes tacrolimus (32,33). Thus, WZ can be used to reduce the tacrolimus dose and save money on health care, especially for children who need tacrolimus long term (34), such as children with liver transplants.

A novel discovery of the present study was that compared with tacrolimus clearance previously reported in Chinese patients with pediatric refractory nephritic syndrome patients (not receiving a liver transplant) (34), the clearance of tacrolimus was markedly reduced in the early stage of the liver transplant in Chinese children. This was primarily due to the limited function of the transplanted liver in the short period of time whilst still in the setting up stage, particularly in the early stage of administration of the initial dose, thus the metabolism of tacrolimus in the transplanted liver was insufficient. We hypothesize that the initial dose after transplantation is primarily metabolized by the intestine, which also explains why donor liver genotypes can be ignored when determining the initial dose, as shown in Figure 4. This also confirmed that although we did not consider donor liver genotypes, the recommended initial dose was still suitable. 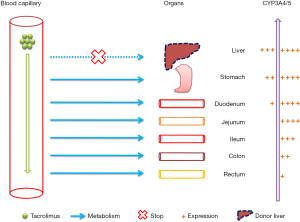 Figure 4 Metabolism of the initial dose of tacrolimus. Expression of CYP3A4/5 from the rectum, colon, ileum, jejunum, duodenum, to the stomach gradually increases (1).

However, there were limitations in the present study. This study is a single-center study and the number of patients was limited. Thus additional data from other sources are needed to verify the validity of our model.

The optimal initial dose of tacrolimus for Chinese patients undergoing pediatric liver transplantation was determined based on population pharmacokinetics and pharmacogenomics, for the first time.

Reporting Checklist: The authors have completed the TRIPOD reporting checklist. Available at http://dx.doi.org/10.21037/tp-20-84

Conflicts of Interest: All authors have completed the ICMJE uniform disclosure form (available at http://dx.doi.org/10.21037/tp-20-84). The authors have no conflicts of interest to declare.

Ethical Statement: The authors are accountable for all aspects of the work in ensuring that questions related to the accuracy or integrity of any part of the work are appropriately investigated and resolved. The study was performed in accordance with the Declaration of Helsinki (2013 revision) and was approved by the Research Ethics Committee of the Children’s Hospital of Fudan University (Ethical code: [2019] 020). Individual consent for this retrospective analysis was waived.