Neonatal sepsis occurs during the first month (less than or equal to 28 days) after birth and may include infections at normally sterile sites and present other symptoms associated with the disease (1,2). According to the age of onset, neonatal sepsis can be divided into early-onset neonatal sepsis (EONS) (≤72 hours after birth) and late-onset neonatal sepsis (LONS) (>72 hours, except for late-onset Guillain-Barré syndrome) (2-4). Traditionally, both LONS and EONS are caused by bacterial infection; in recent years, however, an increasingly higher proportion of LONS cases have been attributed to fungal infections, which can involve focal symptoms in nerves and bone marrow and incur severe short- and long-term complications. Since the early clinical manifestations of neonatal sepsis are mild and atypical (5,6), bacterial culture of sterile body fluids (SBF) remains the gold standard for the diagnosis of this disease; however, it is a non-sensitive and time-consuming technique. In contrast, real-time polymerase chain reaction for pathogenic microorganisms is expensive and has not been widely applied in clinical settings. Thus, a variety of auxiliary examinations including testing for biochemical markers and scoring systems have been developed to assist the selection of antibiotics in suspicious cases. Procalcitonin (PCT) is an early inflammatory factor produced during bacterial infections and has been widely acknowledged as a biomarker of bacterial infections in adult patients (7). PCT is more sensitive than C-reactive protein (CRP) in detecting bacterial infections but shows no significant difference in detecting fungal infections, and can prevent physiological interference for patients with LONS. Given these properties, PCT can be used as a diagnostic marker for LONS. It is particularly valuable when used in combination with CRP in patients with a negative blood culture for sepsis. EONS is mainly linked to mothers’ perinatal factors and can be vertically transmitted. Thus, compared with CRP (which is more commonly used), PCT is more sensitive but more likely to be affected by the physiological factors of the neonates after birth; most notably, the PCT level dramatically rises within 72 hours after birth (and particularly within 48 hours). Therefore, the majority of studies have used PCT as a marker for ruling out infections (if it is negative), and few studies have used it as a diagnostic criterion (when it was positive) for EONS.

Therefore, this article proposes that, with the advances in neonatal intensive care, more LONS cases have been found to be caused by fungal infections, with their treatments being quite distinct from those for bacterial sepsis. Blood culture has many limitations, and its sensitivity is especially low for fungi. Consequently, our current study used PCT to compare the different findings between bacterial infections and fungal infections in neonatal patients with LONS in the neonatal intensive care unit (NICU), and attempted to identify different types of infections; in particular, we considered a blood culture showing negative results to indicate sepsis. An accurate and rapid clinical diagnosis is the basis for the successful treatment of sepsis, while identifying the infection type is crucial for selecting the rational treatments and alleviating the severe sequelae caused by sepsis (8). We present the following article in accordance with the STROBE reporting checklist (available at http://dx.doi.org/10.21037/tp-20-127).

The study follows the Helsinki Declaration and was approved by Ethics Committee of People’s Hospital of Wuhan University (The ethics Committee of our school agreed but no number was given because there was no relevant project funding for this article). All the children in our department were treated with the informed consent of their guardians.

The clinical and laboratory data of 131 neonatal patients aged >72 hours present in the NICU of our center from June 1, 2015, to May 31, 2018, were retrospectively analyzed. These patients were divided into three groups based on their disease conditions: a bacterial sepsis (BS) group (n=47), a fungal sepsis (FS) group (n=39), and a normal control group (n=45). These patients had negative blood culture results, negative infection markers with no clinical manifestations, and did not receive any antibacterial treatment during hospitalization. Since sepsis was suspected, PCT and CRP measurements and routine blood tests were performed in the BS group and FS group; in contrast, patients in the control group were premature infants who were ready to be discharged during the same period, in whom the possibilities of bacterial and fungal infections were ruled out. All the relevant tests were performed by the clinical laboratory in our center.

Statistical analysis was performed in the SPSS 19.0 software package (IBM, USA). The measurement data were tested for normality and homogeneity. Since these data were not normally distributed, so Kruskal-Wallis test based on rank statistic were applied for intergroup comparisons and pairwise comparisons. The receiver operating characteristic (ROC) curves were drawn, and the sensitivity, specificity, and areas under ROC curves (AUCs) were compared to evaluate the diagnostic performance of each indicator. A P value of <0.05 was considered statistically significant.

There were no significant differences in age, weight, and gestational age among these 3 groups (P>0.05) (Table 1). Patients in the BS group and FS group met the following diagnostic criteria for sepsis (9): (I) with microorganisms identified in normally SBF after culture; or (II) with clinical manifestations plus 2 abnormal non-specific inflammation markers (Table 1).

Results of PCT and CRP measurements in three groups

The results of PCT and CRP measurements of the 3 groups are summarized in Tables 2,3.

Areas under ROC curve in the three groups (Table 4)

The results of areas under ROC curve in the 3 groups are shown in Figures 1,2 and Table 4. 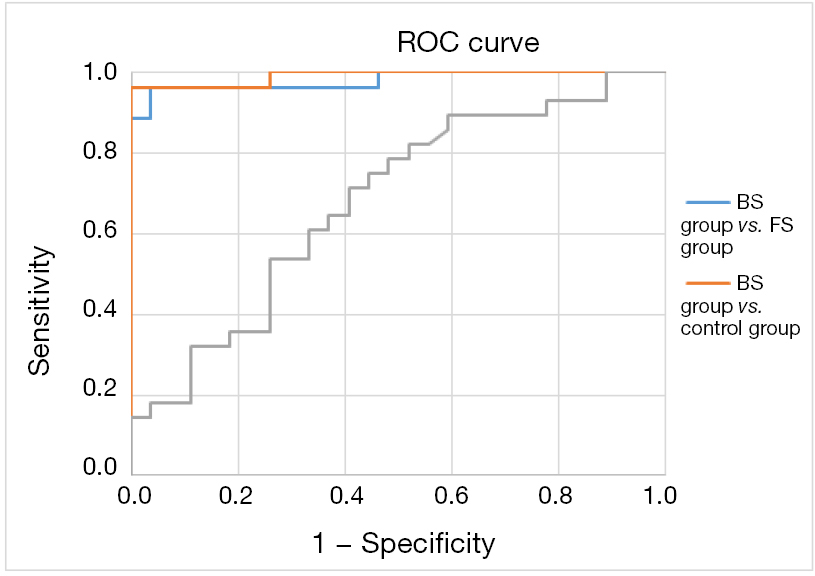 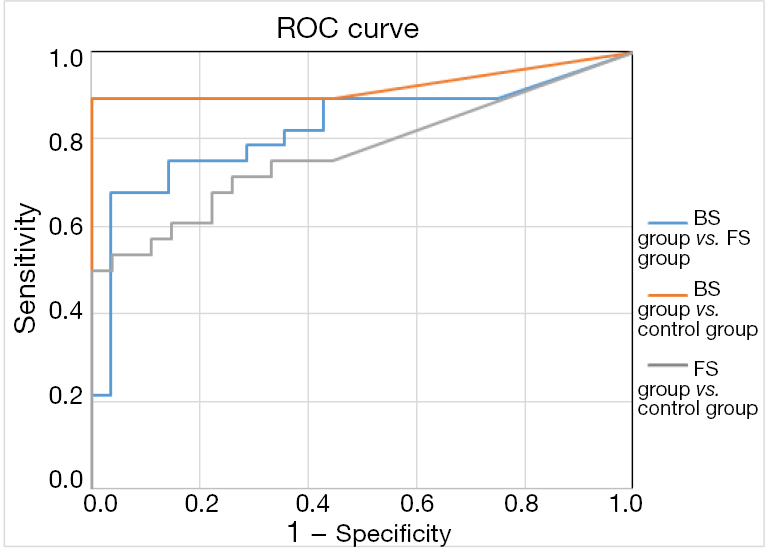 In addition to differing in the time of onset, EONS and LONS also differ in terms of etiology, clinical manifestations, treatment, and prevention measures. Unlike EONS (which is vertically transmitted), the pathogenesis of LONS is closely related to the colonization of pathogens and environmental factors, with preterm birth being its largest independent risk factor. The incidence of LONS is inversely proportional to the gestational age and can reach 25–30% in very low-birth-weight (≤1,500 g) infants (1,10). In recent years, an increasingly higher proportion of LONS cases have been linked to fungal infections, which is quite different from the bacterial infections causing the EONS cases. In recent years, the treatment for EONS and for LONS have differed greatly. The treatment for EONS is based on epidemiological surveys on factors associated with vertical transmission and is typically empirical (mainly based on antibacterial treatment). In contrast, LONS, as a horizontal transmission, is associated mainly with the children’s own microbial colonization and living environments; its treatment should be based on both the local common bacteria and the susceptibility to fungal infections (including factors such as gestational age, use of antibiotics, use of hormones, and intravenous catheterization). LONS patients, especially those with fungal infections, have higher case-fatality rates and case-disability rates, which is quite different from the rates in EONS cases caused by bacterial infections.

Due to certain limitations, including mainly the use of time-consuming and non-sensitive SBF culture for pathogens as the gold standard for diagnosis and the difficulty in collecting blood specimens from premature infants, a diagnosis of BS or FS often cannot be confirmed in a timely manner. Meanwhile, the occurrence and development of sepsis is associated with a series of inflammatory factors; among these is PCT, and it has been widely studied in adult and pediatric patients; compared with the traditional inflammatory markers (such as CRP and IL-6), PCT has shown superior diagnostic utilities in terms of sensitivity and specificity (11-13). Although many studies have investigated the value of PCT in diagnosing EONS, their conclusions were quite contradictory due to the impacts of various factors including physiological status and stress (14,15). Furthermore, few relevant studies have been conducted on LONS. Therefore, our current study retrospectively explored the diagnostic value of PCT for LONS.

As shown in Tables 2,3, pairwise comparisons among the BS group, FS group, and control group showed PCT was more sensitive than CRP in the diagnosis of BS, with a best cutoff value of 0.854 ng/dL; in comparison, the cutoff value of PCT for diagnosing sepsis was ≥2 ng/dL in the ICU and NICU (16,17). A lower cutoff value means higher sensitivity in the NICU. As shown in Table 4, the area under the ROC curve in distinguishing BS from FS was 0.979 and 0.826 for PCT and CRP, with a sensitivity of 0.962 and 0.679, respectively. Thus, PCT was more sensitive than CRP in identifying BS and FS, with an optimal cutoff value of 0.93. Its accuracy was also higher. PCT was not significantly different between the FS group and control group, suggesting PCT was neither sensitive nor specific in identifying fungal infection or FS.

Since LONS occurs 72 hours after birth, serum PCT level is affected by perinatal and physiological factors. In our current study, comparison of PCT with CRP showed PCT had better biological diagnostic value for bacterial infection; since PCT showed significant differences in neonates with BS or FS, further analysis based on the area under ROC curve revealed that serum PCT level was a good biomarker for distinguishing bacterial infection from fungal infection. Therefore, based on clinical manifestations, PCT is more sensitive than CRP in detecting bacterial infections but shows no significant difference in detecting fungal infections; for patients with LONS, it can also avoid physiological interference. Therefore, PCT can be used as a diagnostic marker for LONS. It is particularly valuable when used in combination with CRP in patients with a negative result after blood culture for sepsis. For instance, if both CRP and PCT increase in an LONS patient, the possibility of bacterial infection can be considered; in contrast, if CRP increases but PCT shows no obvious change, a fungal infection will be considered. Antibacterial or antifungal therapies may be applied accordingly. Timely and rapid diagnosis and rational anti-infective treatment are critically important for lowering the case-fatality rate (18).

An initial diagnosis of LONS can be made based on clinical manifestations and the levels of both PCT and CRP. Accordingly, an antibacterial or antifungal treatment should be initiated as early as possible. Antibacterial treatment alone, as applied for EONS, may delay the treatment of fungal infection and worsen the disease condition. Early rational antifungal treatment will alleviate the severe complications and reduce the mortality in LONS patients. Despite these valuable findings, our current study was limited by its small sample size. Multicenter studies with large sample sizes are warranted to further support our findings and promote the application of PCT in clinical settings.

Reporting Checklist: The authors have completed the STROBE reporting checklist. Available at http://dx.doi.org/10.21037/tp-20-127

Conflicts of Interest: All authors have completed the ICMJE uniform disclosure form (available at http://dx.doi.org/10.21037/tp-20-127). The authors have no conflicts of interest to declare.

Ethical Statement: The authors are accountable for all aspects of the work in ensuring that questions related to the accuracy or integrity of any part of the work are appropriately investigated and resolved. The study follows the Helsinki Declaration and was approved by Ethics Committee of People’s Hospital of Wuhan University (The ethics Committee of our school agreed but no number was given because there was no relevant project funding for this article). All the children in our department were treated with the informed consent of their guardians.