Malnutrition occurred frequently for children in pediatric intensive care unit (PICU), ranging from 35% to 72%. Children in PICU suffered high risk of malnutrition due to variable energy requirements and limited energy reservation. Most poor clinical outcomes, including prolonged length of PICU stay, clinical complications, high medical cost and rising mortality, were closely related to malnutrition (1-7). Nutrition assessment patient in PICU is recommended by the American Society for Parenteral and Enteral Nutrition (A.S.P.E.N.) and optimal nutrition therapy (NT) in pediatric critical care in the Asia-Pacific and Middle East: a consensus to identify malnutrition and evaluate whether an energy supply meets the actual requirements (8,9).

Optimal nutrition is important for sever ill children in PICU. However due to digestive intolerance, fluid restrictions and feeding interruption for diagnostic and therapeutic procedures, etc., nutrition treatment is still a challenge in PICU (10). The cumulative effect of suboptimal nutrition delivery may result in significant caloric malnutrition. The aim of our study was to observe the prevalence of malnutrition and feeding patterns in critically ill children. We aimed to determine whether the total daily energy delivery was accordant with the energy and protein guidelines and identify the factors that were associated with suboptimal nutritional intake in the first 10 days of NT.

We present the following article in accordance with the STROBE reporting checklist (available at http://dx.doi.org/10.21037/tp-19-173).

Participants were eligible for enrollment if they met the following criteria: (I) aged 1 month to 18 years, (II) stayed in PICU longer than 72 hours. Patients who had more than one PICU admission, patients supported by enteral nutrition (EN) and/or parenteral nutrition (PN) in recent 3 months, genetic metabolic disease and HIV infection were excluded. The study was conducted in accordance with the Declaration of Helsinki, and was approved by the Ethics Committee of Shanghai Children’s Medical Center (No. SCMCIRB-K2013002) and informed consent was taken from all the patients.

All children admitted to the PICU of Shanghai Children’s Medical Center between February 2017 and November 2017 were eligible.

Anthropometric nutrition assessment was performed among enrolled children at PICU admission and discharge. Nutrition status was determined from the Z-scores of weight-for-height (WHZ), weight-for-age (WAZ), length/height-for-age (HAZ), body mass index-for-age (BAZ, for children elder than 5 years), based on the World Health Organization child growth standards (11,12). Malnutrition was defined for cases in which rates lower than –2 Z scores, whereas severe malnutrition was attributed in cases below –3 Z scores.

Demographic and clinical data were collected on age, sex, height, admission weight, admission diagnosis, pediatric risk of mortality score (PRISM III) (13), mechanical ventilation time, PICU stay, hospital stay, hospitalization expense, and clinical outcomes. In order to calculate the total daily energy intake (EI), the data of enteral and or PN delivery were collected. The end point for nutrition delivery data was 10 days after admission or the day of discharge from the PICU. 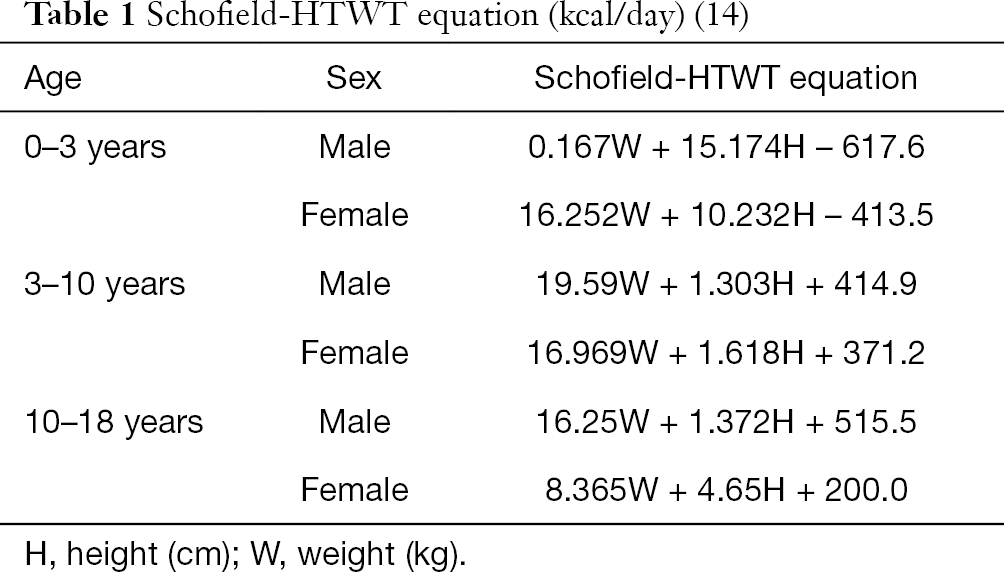 Statistical analyses were carried out with SPSS software (version 17.0). t-test and analysis of variance were used for normal distribution and continuous variables. Wilcoxon signed rank test or Kruskal-Wallis test was performed for non-normally distribution. χ2 test or Fisher’s exact test was carried out for categorical variables. Tests of significance were two-sided, and statistical difference was considered significantly if P<0.05. 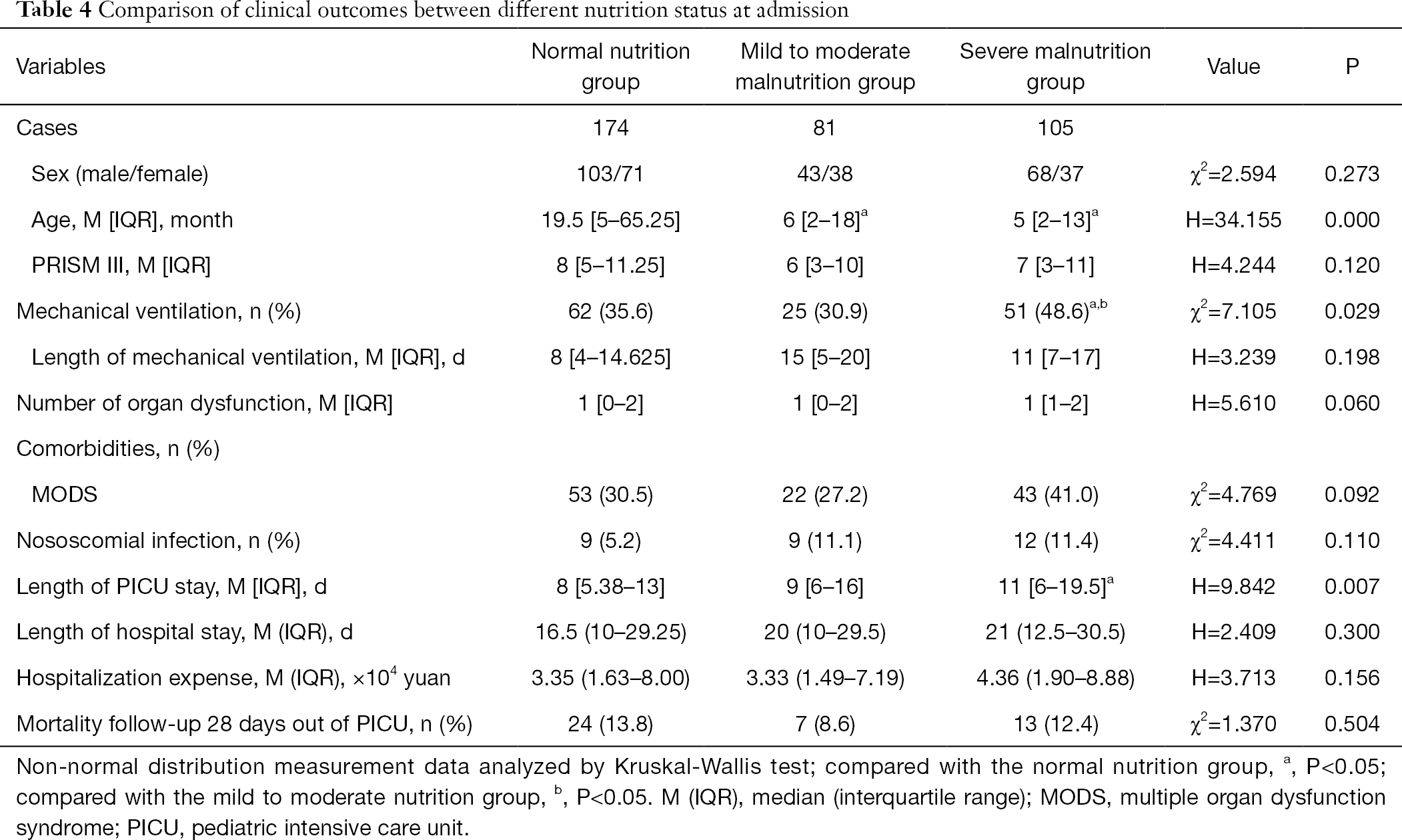 Nutritional status showed a worsening trend during PICU stays, 202 children (56.1%) were malnourished at discharge, 59.9% (121/202) of them were severe malnutritional, among them 31 patients were normal nutrition status when they admit to PICU. The risk factors for worsen nutrition status during hospitalization in PICU were analyzed in Table 5, but there were no significant risk factors found, such as nososcomial infection, time to start EN, average energy and protein intake, calorie and protein compliance rate and number of feeding interruptions, etc. 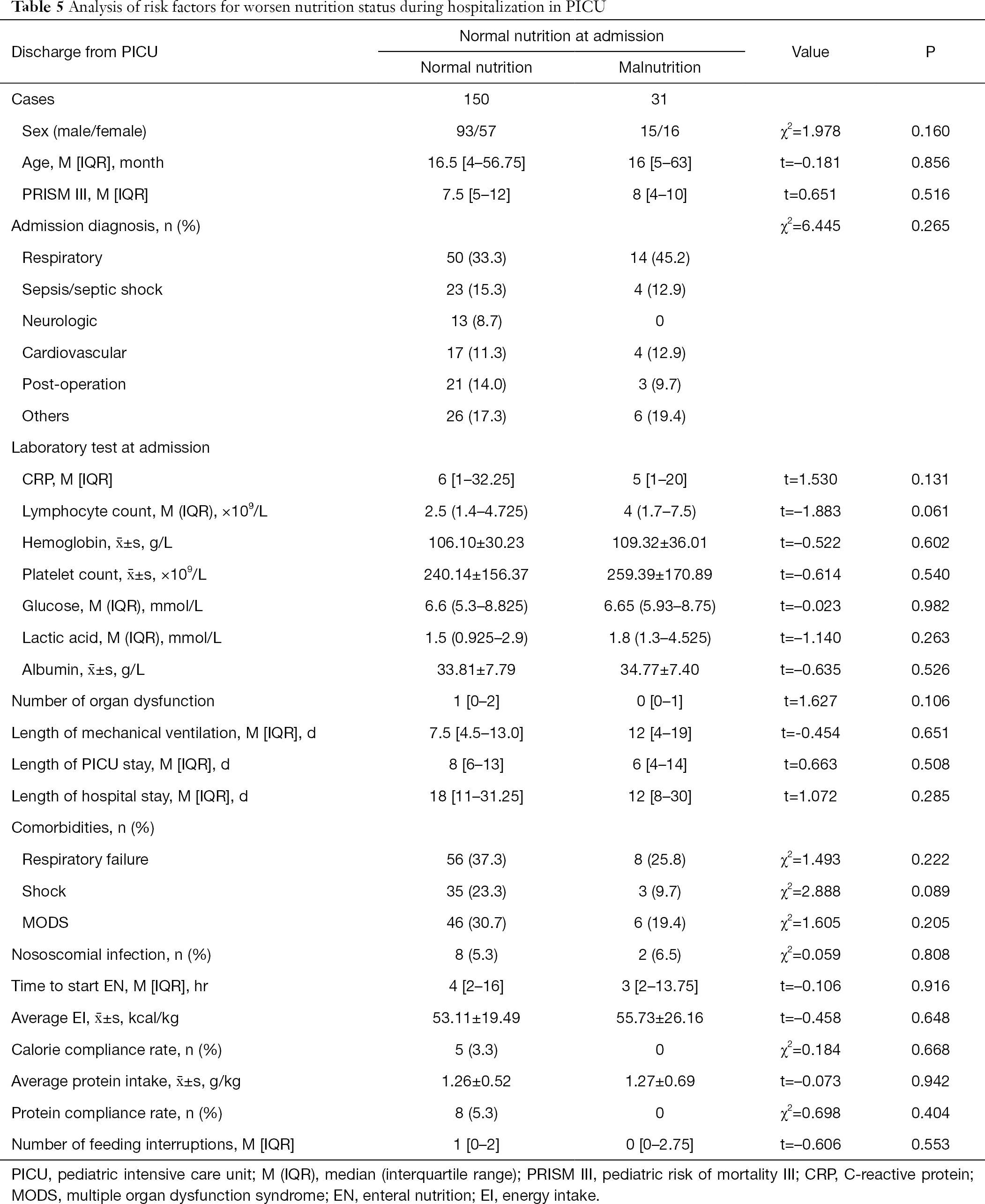 Total 44 (44/360, 12.22%) patients died in the study, after carried out the analysis of univariate variables related to death in critically ill children (Table 6), the malnutrition was not statistically different between survivor group and death group (P=0.379). The following factors such as PRISM III, platelet count, number of organ dysfunction, comorbidities, nososcomial infection, plasma albumin level and plasma lactic acid level, were associated with the death group. 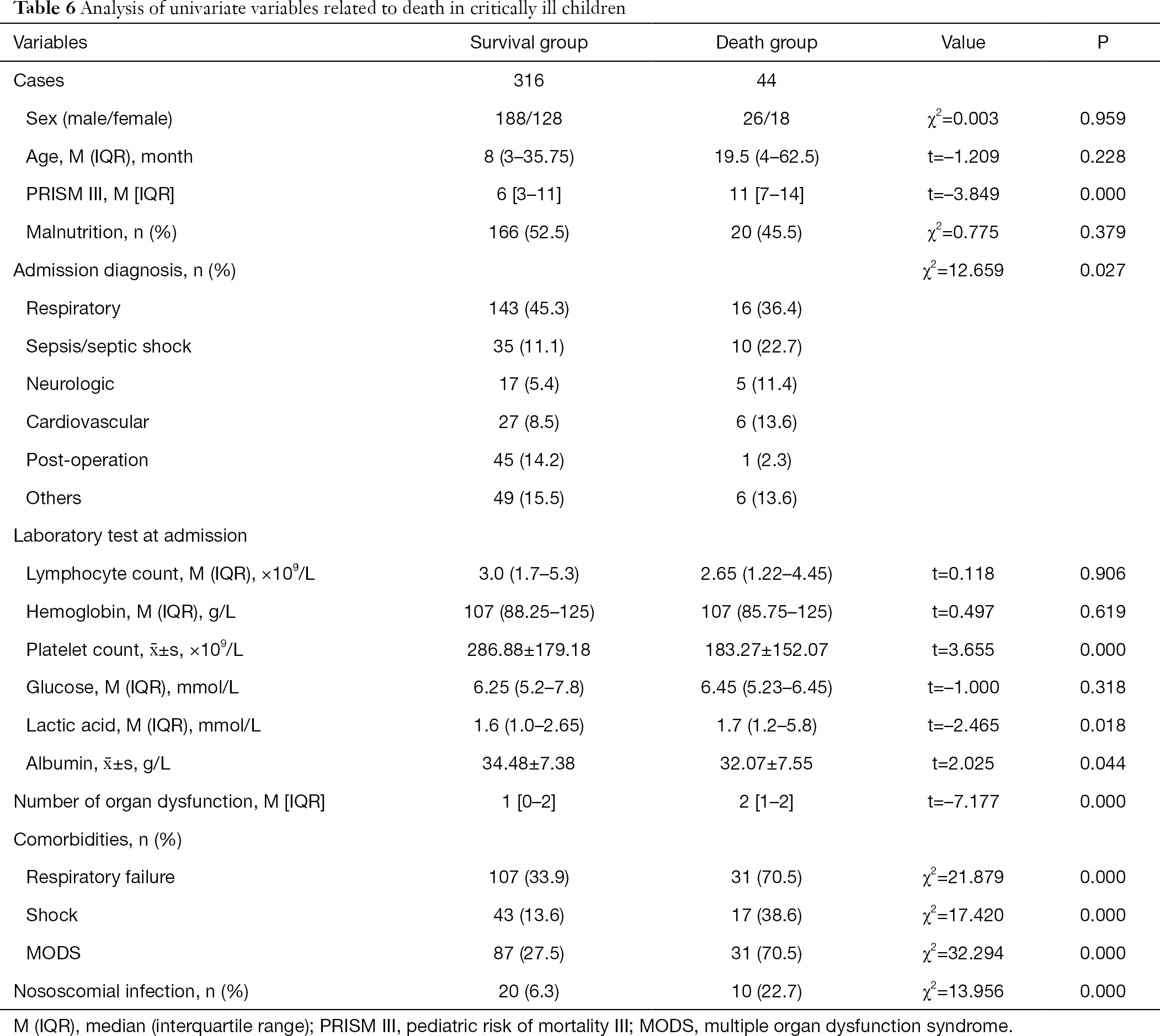 In the former 10 days in PICU after admission only 32.7% of patients underwent EN received estimated protein requirements, but the actual protein intake was significantly lower than A.S.P.E.N. guidelines (P<0.001) (Figure 1). 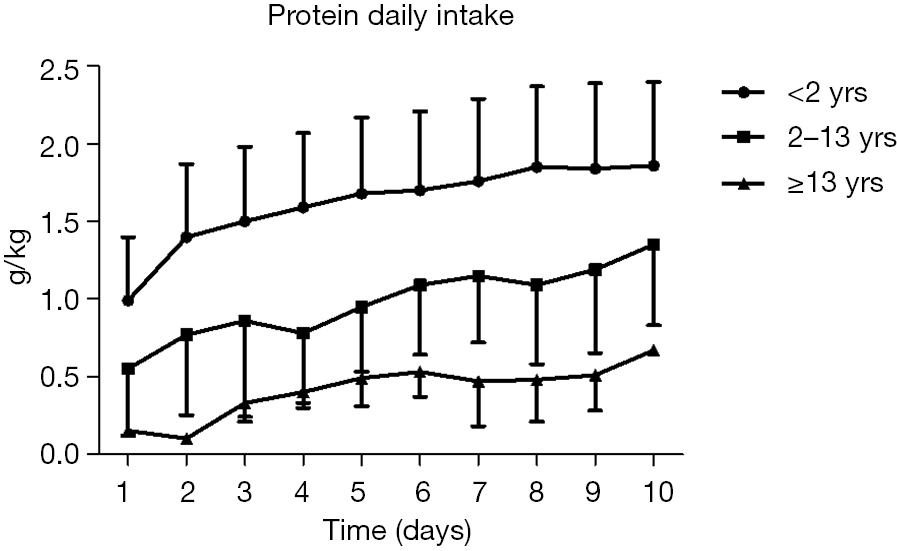 Malnutrition is common in PICU, and this factor is related to adverse consequences (9,16,17). Leite et al. (4) observed 47.1% of the patients were malnourished on admission to the ICU, and the mortality odds ratio (OR =3.98) was higher in malnourished patients with hyperglycemia (P=0.03) after adjusting for clinical severity; hypoglycemia was related with longer ICU stay and fewer ventilator-free days (OR =6.5 and OR =4.11, respectively; both P<0.01). In a prospective cohort study, malnutrition was found to be a risk factor for length of ICU stay and also related with length of ventilation more than 5 days (OR =1.76; P=0.024) (7). Castillo et al. (7) studied critically ill children receiving continuous renal replacement therapy (CRRT) and found mortality for patients with weight less than the third percentile (P3) was greater than that with weight more than P3 (51% vs. 33%; P=0.037). In addition, the only factor associated with mortality was malnutrition in the univariate and multivariate logistic regression analyses (OR =2.11; 95% CI, 1.067–4.173; P=0.032). In our study, 51.67% of children were acutely and/or chronically malnourished upon admission to PICU, above 50% of those malnourished children had severe malnutrition. We also found children with malnutrition had greater length of PICU stay (P=0.001) and mechanical ventilation support rate (P=0.029).

Some study showed that reasonable nutrition treatment was related with better outcomes in the treatment of malnourished ICU patients (18-20). Therefore, the administering of optimal NT is an essential measure of critical care, which aims to provide patients adequate calories for curing malnutrition or preventing progression of malnutrition (21-23). It is well known EN is the preferred mode of nutrient administering for severe illness children with a functioning gastrointestinal tract, if tolerated (9). Although we have attached importance to NT in critically ill children, the protein and energy deficits were often observed during PICU stay, common factors contributing to that deficits include: (I) increased demands secondary to the metabolic stress response, (II) inadequate substrate delivery at the bedside, and (III) failure to estimate energy expenditure accurately (24). In a study of NT of 90 consecutive patients in a tertiary pediatric ICU in Brazil, Zamberlan et al. (25) found NT was initiated within 72 hours after admission averagely; Among them, 80% children received EN therapy, only 10% received PN, and the rest underwent mixed NT (EN + PN). Although most patients were abrosia from hospital admission, they received adequate nutrition delivery at the end of the first week, with an average EI of 82 kcal/kg/d and protein intake of 2.7 g/kg/d. They still found arm circumference and triceps skinfold thickness significantly decreased (P<0.001). In a retrospective evaluation of 240 PICU patients, the actual EI for during hospitalization was significantly lower than basal metabolic rate (75.7%±56.7%, P<0.001), and the actual protein intake came to an average of 40.4%±44.2% of protein requirements, which was significantly lower than the ASPEN guidelines (P<0.001) (26). Keehn et al. (27) evaluated NT in 100 critically ill children, found the mean of nutrition initiation time was 22.8 (16.6) hours, NT was interrupted 1.2 (2.0) times per patient; interruption duration caused by surgery and planned extubation was significantly longer than all other interruption (P<0.001 and P=0.001, respectively). We recorded NT administered to 360 critically ill children admitted to PICU for longer than 72 hours, and found 68.1% of the patients received EN or/and PN. Nutrition status during hospitalization of PICU showed a worsening trend, there were statistically significant differences in WAZ, HAZ and BAZ in our study. We believed that nutrition depletion was associated with deficiencies of the daily calories and protein intake. In the first 10 days of EN, there was 1.9 times feeding interruption per person. Invasive operation and imaging examination were the main barriers to deliver prescribed calories. On the one hand, prescription calories and protein have to be reduced because of clinical instability, feeding intolerance or fluid volume restriction; on the other hand, the prescribed energy was failed to deliver due to feeding interruption caused by imaging examination, intubation, extubation, etc. Optimal and effective implementation of NT in critically ill children is still a tough issue. Although there were 31 patients transited to malnutrition from normal nutrition at discharge, but no significant factors were found to be associated with it, including feeding interruption, time to start EN, average energy and protein intake, calorie and protein compliance rate and number of feeding interruptions, etc. Maybe the reason was that this was a small size sample and single center study.

The evaluation and selection of nutrition support should be an essential component for all hospitalized children. The primary indication for starting nutrition support is aimed to prevent or treat malnutrition patients who were disable to maintain adequate intake orally. Energy expenditure varies during critical illness, reasonable caloric supply has become an important component of NT. Feeding status could be determined by the respiratory quotient (RQ), or EI to energy requirements ratio. Using a measured RQ less than 0.85 to recognize underfeeding, which had high specificity (87%) but low sensitivity (27%); a measured RQ more than 1.0 had low sensitivity (21%) and high specificity (98%) for identifying overfeeding (28). de Oliveira Iglesias et al. (15) evaluated that the ratio of delivered energy versus required energy was 90% in 55.7% of the EN days, and revealed that low prescription was the main reason for not achieving the energy goal during the ﬁrst 5 days’ EN. Mehta et al. (29) observed that the energy expenditure was often overestimated through standard equations, and a high incidence of overfeeding reached to 83% with cumulative energy excess of up to 8,000 kcal/week was found, especially in children less than 1 year. Indirect calorimetry had not been used and energy requirements were calculated with the Schofield-HTWT equation in the study. Comparison of PEE with the total EI showed that 48.5% of those nutrition days were underfeeding, 19.8% overfeeding, and only 31.7% adequate feeding in the 1,649 EN days. Cumulative negative energy balances exacerbated malnutrition, which was correlated with greater length of PICU stay.

This study has some limitation. Firstly, predictive formula instead of indirect calorimetry was used during energy expenditure calculating. Secondly, this study was performed in a single center, and the ages, weights, diagnoses of the enrolled patients were different in wide range.

In conclusion, malnutrition is common among children admitted to PICU. Although the Schofield-HTWT equation would provide estimated individual energy requirements and may guide nutrition prescription, NT may be intolerable among most of critically ill children due to disease progression or treatments, such as stress ulceration, intestinal paralysis, internal environment disorders, liquid limitation and invasive operation. Further research to improve individual NT in critically ill children would be in progress.

Funding: The Project was Support by the Shanghai Natural Science Foundation of China (No. 19ZR1432900).

Reporting Checklist: The authors have completed the STROBE reporting checklist. Available at http://dx.doi.org/10.21037/tp-19-173

Conflicts of Interest: All authors have completed the ICMJE uniform disclosure form (available at http://dx.doi.org/10.21037/tp-19-173). The authors have no conflicts of interest to declare.

Ethical Statement: The authors are accountable for all aspects of the work in ensuring that questions related to the accuracy or integrity of any part of the work are appropriately investigated and resolved. The study was conducted in accordance with the Declaration of Helsinki, and was approved by the Ethics Committee of Shanghai Children’s Medical Center (No. SCMCIRB-K2013002) and informed consent was taken from all the patients.