Spectral karyotyping: an unique technique for the detection of complex genomic rearrangements in leukemia

Since the introduction of the conventional chromosomal banding techniques, clonal chromosome aberrations have been identified in more than 50,000 neoplasmas, including malignant hematologic disorders, malignant lymphomas, and benign and malignant tumors and such detection has become essential for accurate diagnosis and treatment on leukemia, moreover, as independent prognostic factor, chromosomal changes are concerning the likelihood of remission induction and risk of relapse. In 1997, some of these aberrations detected have been used within the WHO classification to define specific subgroups of leukemia. With cytogenetic technical development, the abnormal detection rate on chromosome malignancies is increasing. Based on Fluorescent in situ hybridization (FISH), the Spectral karyotyping (SKY), Multicolor FISH (M-FISH) (1), comparative genomic hybridization (CGH) and some others techniques took chromosomal analysis to full colorful world. In 1996, Schröck E et al. (2) reported SKY application for the first time. Conquering weaknesses of conventional FISH, SKY can simultaneous and unambiguous display human and rat’s all chromosomes in 24 deferent colors without a priori knowledge of any abnormalities. So SKY is playing the important role in comprehensive analysis of chromosomes to help the study of leukemia (see Figure 1). 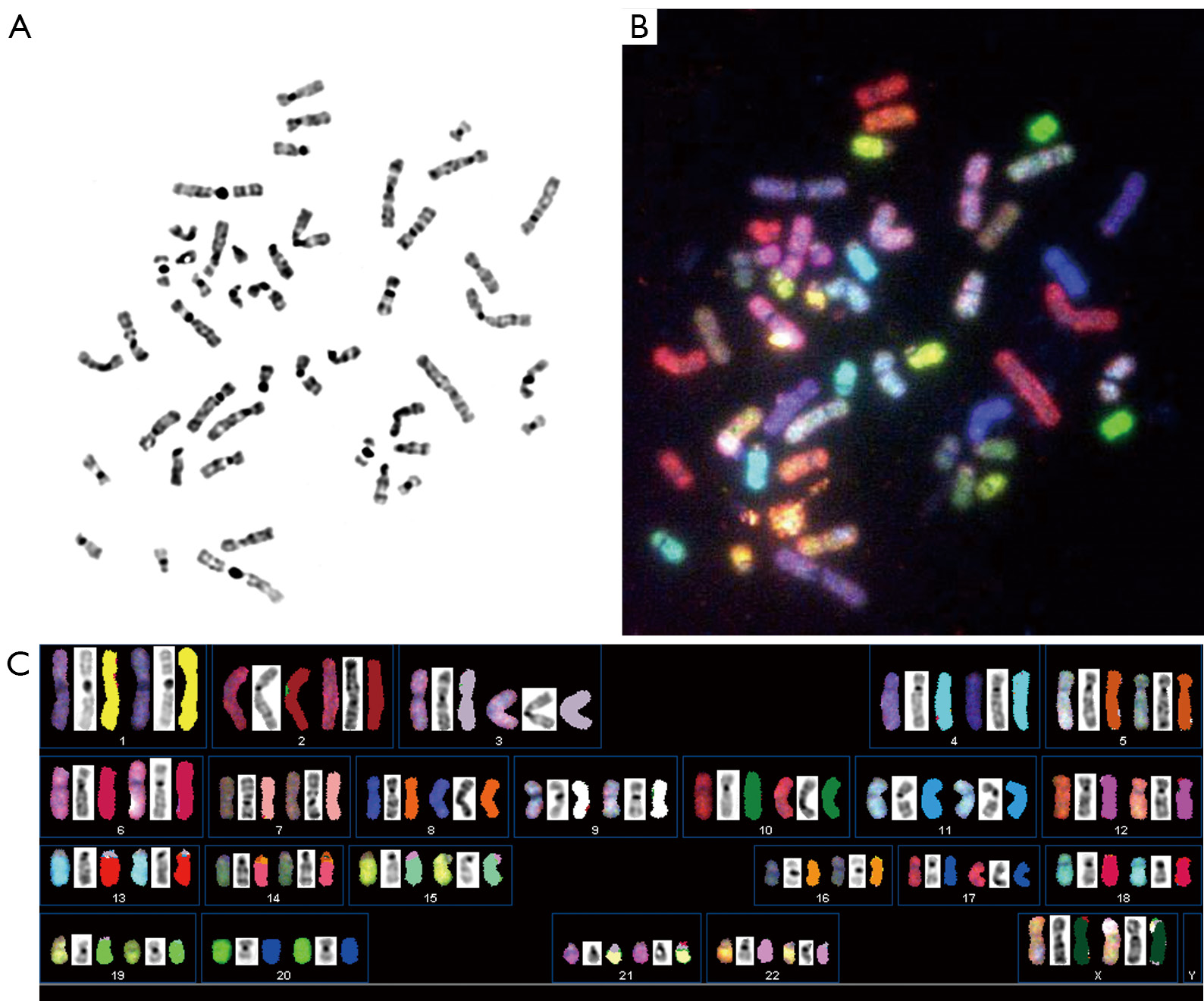 SKY combines Fourier spectroscopy, charge-coupled-device (CCD) imaging, and optical microscopy, and optical microscopy to measure simultaneously at all points in the sample emission spectra in the visible and near-infrared range. This allows the use of multiple spectrally overlapping probes. Hybridization, Image acquirement and results analysis are the major steps in the karyotype analysis with SKY technique.

This step is the spectral imaging system measures the full visible light spectrum emitted from the sample in order to acquire a spectral image of the chromosomes. First, all the dyes in the chromosome painting probes are emitted by special lamp-house and cubes, through the spectral interferometer, spectrum-specific images are captured with a CCD camera. The conversion of emission spectra to the visualization of display colors is achieved by assigning blue, green, and red colors to specific spectral ranges, these three colors are named display colors. The display colors allow the assessment of the quality of the hybridization, e.g., uniformity of hybridization and signal brightness, and are used as a first evaluation of the hybridization directly after image acquisition and without further computation. But the display colors are similar because spectrally overlapping fluorochromes. Finally, the classification colors allow all chromosomes are distinguished based on measure the spectrum at every given pixel with Fourier transformation and computation soft. So each pair of chromosomes would appear with unique distinct color.

SKY View, the analysis soft, analyzes the results of the spectral image and display the image so that chromosomal abnormalities are easily identified.

SKY are FISH based methods allowing for the simultaneous display of all chromosomes in different colors using five fluorochromes, alone and in combination in a single experiment. The techniques employ a different approach to image acquisition: the strength of SKY is the immediate identification of interchromosomal aberrations, for example, translocations that lead two color differences on the derivative chromosome, as well as the elucidation of complex rearrangements. They have their limitation in the identification of chromosomal changes that do not lead to a discernable color change: small deletions, duplications and intrachromosomal inversions. The resolution of SKY for the detection of interchromosomal rearrangements has been shown to be between 500-2,000 Kb (3), but of course significantly depends on metaphase chromosome extension as well as hybridization quality (1,4,5). To achieve the most comprehensive karyotype description possible a combination of conventional band, FISH, CGH, and other techniques (6-9).

SKY in cell lines of leukemia

Chronic myelogenous leukemia (CML) is a clonal bone marrow disease with progression from a chronic phase to an aggressive blast crisis. The cell line NALM-1 was originally established from the peripheral blood of a patient with CML blastic crisis. Cytogenetics of NALM-1 was analyzed with GTG banding, FISH, and SKY by Pelz AF et al. (11), who described the karyotype of NALM-1 cell line for the first time: 44,X,-X, der[7]t[7;9;15)[q10;?;q15], der[9]t[9;9][p24;q33 approximately q34]t[9;22][q34;q11], der [15]t[7;9;15][?;?;q15], der[22]t[9;22][q34;q11]. In a research of comparing karyotypes between a new cell line of natural killer (NK) cell, IMC-1 and cells from an adult patient with aggressive NK cell leukemia. After 55 weeks culture of IMC-1, reported by Chen IM et al. (12) defined the karyotypes by G-banding and by SKY. They found complex structural and numerical abnormalities in both cells. Three apparently intact copies of chromosome 8 occurred in the diagnostic bone marrow specimen; the cell line also contains three copies of chromosome 8 but each was structurally altered. The development and detailed characterization of this new NK leukemic cell line by SKY facilitated the biological and functional studies of NK cells and chromosomal aberrations potentially important in leukemic transformation investigation.

As SKY has appeared, this has been paid more attentions and researches. The first study on hematological malignancies was reported by Veldman et al. (13). Seven cases of AML and MDS were studied, and SKY confirmed the results of conventional banding based karyotyping (G-banding), and recognized previously unidentified material of the origin, thereby demonstrated its value for the analysis of such cases. After this, SKY was used in lager samples, and study level was higher and higher. SKY has become an important technique to improve the chromosome analysis.

Ohsaka A et al. (8) reported a case of atypical chronic myeloid leukemia showed an abnormal clone, which was interpreted as 46, X,-Y, +der [?]t[?;1][?;q?1], and Philadelphia chromosome by G-banding but Reverse transcription-polymerase chain reaction(RT-PCR) but no BCR-ABL fusion genes were detected. After SKY and FISH analysis, the karyotype was refined to be 46,X, der[Y]t[Y;1][q11.1 or.2;q12]. Result demonstrated that SKY in combination with the conventional banding and FISH is useful and specific for the exploring of undefined chromosome abnormalities in hematological disorders.

About 25-45% of newly diagnosed adult AMLs and 10-30% of ALLs appear to be a karyotypically normal, with no clonal chromosomal aberrations detectable by conventional banding technique. Similarly, the great majority of these cases remained normal after SKY analysis, however, a part of these cases were detected critical aberrations by SKY which were showed normal by G-band or R-band (14-19). The cryptic t[11;19] and 5q- also indicating poor prognosis were found in another research of Hilgenfeld et al. (20). And t[11;19] was detected again by SKY in study of Kakazu et al. (14). These reports showed this translocation can be missed by conventional banding analysis.

About 75-90% of all children with leukemia showed evidence of clonal chromosomal aberration when they are first diagnosed, but 10-25% of which aberrations couldn’t be identified by conventional band. Lu et al. (9) applied SKY to panel of 29 newly diagnosed pediatric pre B-cell ALL. They found a cryptic t[12;21][p14;q11] were in six cases, marker chromosomes in two cases and identified the misidentified aberrations by G-band detected. They also identified five novel non-recurrent translocations t[2;9][p11.2;p13], t[2;22][p11.2;q11.2], t[6;8][p12;p11], t[12;14][p13;q32] and t[X;8][p22.3;q?]. Of these translocations, t[2;9], t[2;22] and t[12;14] were identified by G-banding analysis and confirmed by SKY. They characterized a t[12;14][p13;q32] translocation by FISH, and identified a fusion of TEL with IGH for the first time in ALL. These studies demonstrate the utility of using SKY in combination with G-banding and FISH to augment the precision with which chromosomal aberrations may be identified in tumor cells.

SKY in complex karyotypes of leukemia

Deletions on unbalanced translocations in part leukemia with complex aberrations were particularly prone to misinterpretation based on G-band alone, especially when chromosomal regions where they have a similar G-band pattern involved. In this condition, SKY has special advantages that it can correct or improve the detection to obtain more accurate karyotype changes.

Tchinda et al. (19) used SKY and FISH to further characterize chromosomal abnormalities in 35 patients with hematological disorders, that result confirmed 149 aberrations, refined 117, and detected 11 hidden changes. In contrast, 18 abnormalities were detected only by G-banding. Ten monosomies and two deletions described by G-banding were shown to be involved in translocations or ring chromosomes. These results demonstrate that SKY increases the accuracy of karyotype detection, which is important for proper diagnosis and management of hematological malignancies.

Since chromosomal changes are used both as independent prognostic factors and for therapy design in hematological disorders, it is necessary to elucidate chromosomal changes as accurately as possible. Therefore, SKY has important value for the therapy and prognosis for patients with leukemia could be re-judged.

Mrózek et al. (22) used SKY studied 29 adults with acute myeloid leukemia and a complex karyotype containing one to nine abnormalities that they were not fully identifiable by G-banding. However, SKY showed the origin of rings and identified material origin in unbalanced translocations in all cases and the origin of markers in most, allowing reinterpretation of 136 aberrations and the discovery of these three aberrations hidden in normal chromosomes. SKY confirmed ten cases and refined the interpretation of three cases balanced aberrations recognized by G-banding and identified another nine balanced aberrations, including a novel translocation involving the RUNX1 gene. Eleven of 32 deletions found by G-banding were shown to be cryptic translocations or insertions, including t3 of 4 chromosome 3 deletions, 2 of three del[7q], and 2 of 12 del[5q]. The most frequently overrepresented was 21q, found in eight patients, including four with high-level 21q amplification.

SKY considerably enhances the accuracy of karyotype interpretation, and that amplification of chromosomal material may play a greater role in leukemogenesis than it has been recognized. Besides, a comprehensive karyotype in an adult ALL by SKY and R-banding. SKY conﬁrmed and improved the abnormalities previously seen by R-banding and showed a comprehensive karyotype, 47,XY,+9, ins[1;5][q23;q23q34] t[6;7][q23;p13] (23).

SKY has proved to be a very useful cytogenetic tool, which is hyper accurate, hypersensitive, and hyper intuitionist comparing with other available techniques. SKY is playing an important role in the detection of complex chromosomal aberration and also in the identification of new leukemia subgroups. Improving itself and combining with other cytogenetic and molecular technique, SKY would be a very helpful tool to supplement conventional banding technique in the disease diagnosis, management and the prognosis.