Bronchial asthma (or asthma) is one of the most common chronic respiratory diseases in children. Globally, the past decades have witnessed the rapid development of socioeconomy, sciences, and technology; unfortunately, the prevalence of asthma has also gradually increased. Up to now two large-scale epidemiological surveys on childhood asthma have been conducted in China (1,2); however, both of them were focused on children living in big cities, and few data concerning the prevalence of asthma among children living in the same area but with different living conditions, different economic levels, and different sanitation environments have been reported. Therefore, in our current study, we conducted an epidemiological survey on asthma using cluster sampling method among 0-14-year-old children in Chengdu, capital of Sichuan Province, from September to December 2010.

By adapting the protocol developed by the Task Force on the Third National Epidemiological Survey on asthma among 0-14-year-old children, we selected children aged 0-14 years who were born during the period from July 1, 1996 to June 61, 2010) from urban (Qingyang District of Chengdu), suburban (Chengguan Town of Jintang County), and rural (Zhuhao Town of Jintang County) areas of Chengdu as subjects in our projects. According to the sample size calculation formula (N = Uα2 × π × (1-π)/δ2) and the total child populations in these three areas, the sample sizes were 12,000, 6,000, and 6,000 in the urban, suburban, and rural areas. Based on the total child populations and the percentages of children in different age groups, the sample size for each age group was calculated. Finally, the subjects were selected from all children aged 0-14 years in schools, kindergartens, and communities by random, cluster, and non-proportional sampling. The diagnosis of asthma in these children was based on the Guidelines for the Diagnosis and Treatment of Asthma in Children (2008 edition) (3). The diagnoses included confirmed asthma, cough variant asthma (CVA), and suspected asthma.

The protocol, survey steps, and questionnaires used in the Third National Epidemiological Survey on asthma among 0-14-year-old children were adapted in our study. Before the initiation of the survey, all the investigators received adequate training in the “2010 Workshop on National Epidemiological Survey on Asthma in Children”. The investigators registered all the sampled populations firstly, and then distributed the screening forms to the parents; after these forms were collected, suspected children with wheezing, cough, repeated respiratory tract infection, or a history of bronchitis were identified. Respiratory specialist physicians who had received uniform training carried out comprehensive inquiry and physical examinations using the standard questionnaires, and then made the final diagnosis and completed the asthma questionnaires. During the survey, special supervisors are assigned for organization, supervision, and quality control.

Asthma in male and female children

The prevalence rates of asthma were significantly higher in males than in females in all three areas (all P<0.01) (Table 2). 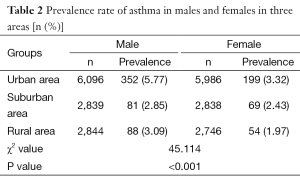 The prevalence rates of asthma were relatively high in the 3-10-year-old age group in all three areas, and then gradually declined as the children become older (Table 3). 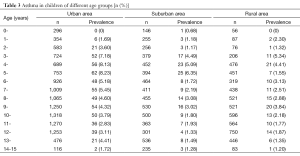 Triggers for an acute asthma attack

The main trigger for an acute asthma attack among these children was respiratory tract infections (91.3%), followed by climate change (43.8%). Only a small proportion of the attacks were caused by pollen allergy (6.6%) (Table 4).

Age of the first asthma attack

The timing of the acute attacks showed no specific rule among most asthma children in all these three areas. Asthma attack was more common in autumn, winter, and during seasonal changes. Children living in the urban area were significantly more likely to experience asthma attacks in autumn and winter than those in suburban and rural areas (P<0.05) (Tables 6,7).

In all these three areas, over 80% of the pediatric asthmatic patients had used bronchodilators. Antibiotics were used in around 90% of the patients, and the antibiotic usage rate was significantly higher in the rural area than in the urban and suburban areas. The use of inhaled corticosteroids gradually decreased from the urban area to the suburban area, and then to the rural area; the use of leukotriene modifiers showed similar trend; and, the usage rates of systemic hormones were particularly high in the rural area (Table 9).

The prevalence rates of various allergic diseases were significantly highest among children living in the urban area, followed by the suburban and rural areas (P<0.05) (Table 10).

When choosing the research subjects, the inclusion criteria were different from those adopted by two large-scale surveys on childhood asthma in China (1-2,4) and an epidemiological survey conducted in several major cities in recent years (5). In addition to the 0-14-year-old children in the downtown of Chengdu, children who were living in the suburban and rural areas that have the same geological location, season and climate change but with different population density, economic income, health care resources, and life habits were also enrolled in this study. The suburban area (Chengguan Town, Jintang County) was roughly 100 kilometers away from Chengdu, whereas the urban area is a hilly town. The results showed that the cumulative incidence rate of asthma was significantly higher in the urban area (4.56%) than in the suburban (2.64%) and rural areas (2.54%). This may be explained by the following factors: (I) Along with the rapid industrialization and the increase of socioeconomic levels, the urban area has become more populous, and the number of families having cars, air conditioners, and carpets has rapidly increased; as a result, the environmental pollution is more severe in the urban area than in suburban and rural areas. More children who are prone to allergy are more likely to be affected by the environmental triggers (6). Furthermore, children who are living in the urban area are more likely to exposed to allergenic foods such as eggs and seafoods when they are at a young age; (II) The Jintang County, located in the outskirt of Chengdu, is a hilly area that are surrounded by hills and waters. Compared with the downtown of Chengdu, it is less populous; and, without environmental pollution from large plants, it has much fresher air; (III) According to the “Hygiene Hypothesis”, children living in the urban areas are less possible to be exposed to the pathogenic microorganisms due to their good hygiene and sanitary conditions, and therefore they are less likely to suffer from communicable diseases and other infectious diseases; as a result, however, the Th1 response towards these microorganisms is weakened, together with relatively enhanced Th2 response. Thus, children in the urban areas are more susceptible to allergic diseases. As shown in our current study, the pediatric asthma children with a history of eczema, allergic rhinitis, and/or other allergic diseases were most common in the urban area, followed by the suburban and rural areas, which is consistent with the literature (7,8). In addition, a significantly higher proportion of male patients were found in all these three areas, which is also consistent with the literature (9,10). The possible explanations include the differences in hormone secretion and genetic susceptibility; the lower infection threshold in female carriers of pathogenic genes may also play a role.

Our study also showed that the correct rate of diagnosis of asthma was highest in the urban areas, followed by the suburban and rural areas. In China, the advocation, training, and implementation of the Global Initiative for Asthma (GINA) has greatly improved the early diagnosis of asthma; however, due to the diversities in health care resources, professional levels, socioeconomic development, family income, and parents’ awareness and knowledge, the asthma diagnosis warrants further improvements in different areas.

The occurrence of asthma is closely linked to environmental factors, and childhood asthma is often age- and season-specific. In our current study, children whose first asthma attack occurred below 4-year-old accounted for over 75% in all the three areas. The most common trigger was respiratory tract infection, followed by climate change and irritative taste. The predilection seasons were autumn and winter as well as the transitions of seasons. This may be explained by the fact that the organs and systems are not well developed and the immune system is not sufficiently robust in infants and young children.

In summary, our current study provided solid evidences for the health authorities and may guide future-decision making on disease control, prioritized investments in health care in rural area, and appropriate prevention and control of childhood asthma.

We are grateful for the training fund provided by the Bureau of Chronic Diseases, Ministry of Health as well as the schematic, technical, and financial supports from the Prevention, Treatment and Education Center for Asthma, Capital Institute of Pediatrics and the Institute of Environment and Health Related Product Safety, Chinese Center for Disease Control and Prevention. Also, we gratefully acknowledges the participation of Dehou Xue, Lina Chen, Deyuan Li, and Hanmin Liu from West China Second Hospital of Sichuan University, Xiaofan Liu and others from Chengdu University of traditional Chinese Medicine, and Cilin Wang and others from Chengdu Women’s and Children’s Central Hospital in data collection. Special thanks are also due to Qiang Wang from China CDC for his inputs to data review and entry and Wei Tian from Institute of Medical Information, Sichuan Provincial People’s Hospital for his aid in data analysis.