The inflammatory bowel diseases (IBD) are chronic and incurable inflammatory diseases of the gastrointestinal tract characterized by relapsing and remitting inflammation (1). IBD includes the conditions known as Crohn’s disease (CD), ulcerative colitis (UC) and IBD unclassified (IBD-U). The Canterbury region in New Zealand (NZ) has one of the highest incidence rates worldwide of IBD (2,3).

Vitamin D is a fat soluble vitamin, which is now known to have immunomodulatory properties in addition to its role in calcium and phosphorous metabolism (4,5), following the discovery of vitamin D receptors on many immunological cells in the 1980s (5-7). There is now considerable evidence that vitamin D is involved in B and T cell-mediated, and innate immunity (4,8-10).

Vitamin D deficiency may also contribute to IBD pathogenesis (4,10). A geographical gradient in IBD incidence has been previously demonstrated, with higher incidence reported at higher latitudes where there is less sunlight exposure (4,11). A recent epidemiological study reported higher rates of pediatric IBD in the South Island than in northern regions of NZ (3). IBD pathogenesis involves dysregulation of cell-mediated immunity, therefore considering the role of vitamin D in the immune system and geographical variation in epidemiology, studies have investigated an association between low vitamin D levels and pathogenesis (4,10). Vitamin D deficiency may occur in individuals with IBD secondary to malabsorption, dietary changes and less outdoor physical activity (4). Furthermore, low vitamin D levels have been associated with increased disease activity and clinical relapse of IBD (12-18). Studies identifying seasonal variation in IBD, with flares of disease and symptoms most common at the end of winter, provide further evidence for vitamin D status influencing clinical outcomes (19,20). Vitamin D supplementation was recently associated with reduced markers of interstitial inflammation in patients with active UC and vitamin D deficiency (21), and changes in the intestinal bacterial composition in CD (22).

The safety of high-dose oral vitamin D3 therapy, referred to as stoss therapy, has been demonstrated in children with vitamin D deficiency (23,24) and chronic disease (25-27). Stoss therapy has recently been described in IBD, with one previous report demonstrating the efficacy and safety of stoss therapy in children with IBD in a single center in Australia (28). The aim of this study was to retrospectively assess the efficacy, safety and impact on disease activity of single oral high-dose vitamin D3 therapy in NZ children with IBD and vitamin D deficiency.

A retrospective chart review was performed of children with IBD seen in the pediatric IBD clinic in Christchurch, New Zealand from 2011 to 2015. Inclusion criteria were diagnosis with vitamin D deficiency [serum 25-OH vitamin D level (25-OHD) <50 nmol/L] and management with a single oral high-dose of vitamin D3 (stoss therapy). Exclusion criteria were known disorders of calcium, parathyroid or bone health. Demographic data and disease characteristics were obtained from patient notes.

The results of serum 25-OHD levels prior to and following stoss were retrieved from hospital records. Post-stoss 25-OHD levels were grouped at two time points: 1–2 months and between 3–6 months. Calcium levels after stoss therapy were obtained when available. The results of routine monitoring blood tests, including erythrocyte sedimentation rate (ESR), C reactive protein (CRP), albumin, hematocrit and platelets, were also obtained prior to and three months after stoss therapy when available. Disease activity was assessed at the time of diagnosis of vitamin D deficiency and at 3 months following stoss therapy, using the Pediatric Crohn’s Disease Activity Index (PCDAI) (29). 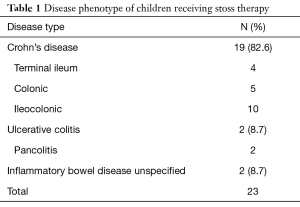 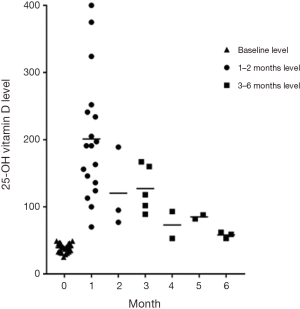 Figure 1 Serum 25-OHD levels in children with IBD before stoss therapy, and at intervals of 1–2 and 3–6 months following stoss therapy, with bars showing mean levels per month.

Serum calcium was measured after stoss therapy on 20 occasions: nineteen measurements were in the normal range. Although one child was found to have a serum calcium of 2.7 (normal range, 2.2 to 2.6 mmol/L) two weeks after treatment, this level had normalized on repeat testing ten days later. This child had a peak 25-OHD level of 77 nmol/L (2 months after stoss). No children presented with symptoms of vitamin D toxicity. The four children with 25-OHD levels >250 nmol/L had normal serum calcium levels after stoss.

Stoss therapy is a novel treatment for vitamin D deficiency in children with IBD, with only one study reporting its use (28). Although mean serum 25-OHD were similar at baseline to the previous Australian study (28), the mean level achieved at 1–2 months appeared to be higher (189 nmol/L, 95% CI: 148–231) than the 1 month levels in the Australian data (146 nmol/L, 95% CI: 94–197) (28). The Australian study included a larger number of children and also demonstrated that stoss was able to maintain normal vitamin D status for 6 months in the majority of the subjects (28).

High-dose oral vitamin D has been shown to be safe and effective at rapidly increasing serum 25-OHD levels in vitamin D deficiency (23,30,31). Stoss therapy has been used successfully in children with cystic fibrosis (25), chronic kidney disease (26) and prior to hematopoietic stem cell transplant (27). A recent study found that in children with chronic liver disease and vitamin D deficiency, weekly vitamin D supplementation was more effective than a stoss regimen (32). Providing single dose vitamin D therapy may improve compliance (31) and emerging data also suggest that high doses may have benefits beyond bone health (24,33). Despite a recent increase in publications describing the use of stoss, the majority of studies remain limited by sample size and larger studies are still required needed to further assess the efficacy of stoss therapy in children (24,34).

Vitamin D toxicity can manifest as hypercalcemia and hypercalciuria, which can lead to nephrocalcinosis (5,34). Toxicity is rarely reported in children with cases described in children taking doses within a range of 40,000 to 560,000 IU/kg (35). In the present study, one child had a single marginally raised serum calcium level 2 weeks following therapy, however the follow-up level 10 days later was normal, the child remained well and the 2-month 25-OHD level was not substantially raised. All four of the children who had 25-OHD levels >250 nmol/L at 1 month, which is a level previously suggested as a safe limit (35,36), had normal serum calcium levels. None of the children in the current study reported symptoms of toxicity. Similarly, stoss was safely administered in the Australian study, with no record of adverse effects (28).

Optimal serum 25-OHD levels are not well defined. The Australian and New Zealand Bone and Mineral Society and Osteoporosis Australia position statement recommend levels in children should be maintained at ≥50 nmol/L (50), although definitions of vitamin D deficiency and insufficiency remain controversial (36). Vieth et al. (51) have shown that levels of 75 nmol/L are associated with maximal enteral calcium absorption, suggesting optimal bone health with levels at or greater than this. There is increasing evidence of effects beyond bone health, with levels ≥75 nmol/L associated with reduced disease activity and better health outcomes in the setting of IBD (38). In this present study, all children with 25-OHD measured at 1 month achieved a level >75 nmol/L, comparable with the Australian study which reported that following 98% of doses levels >75 were achieved at 1 month (28).

The current study was limited by the number of subjects included and the retrospective design, with consequent incomplete availability of monitoring tests which had been completed at variable times. However, all children in this study received consistent care from one gastroenterology clinic and were managed with the same stoss protocol, and these are some of the only data available to assess stoss in children with IBD.

Single high-dose oral vitamin D therapy was used successfully to manage vitamin D insufficiency in these children with IBD, with children achieving serum 25-OHD levels of >75 nmol/L at 1 month post-therapy. An improvement in inflammatory markers and disease activity scores was also apparent in this group of children. These data confirm and support the conclusions drawn from the earlier report of stoss therapy in children with IBD (28). Further prospective studies are now required to assess the impact of vitamin D therapy as an adjunctive therapy in children with IBD and to clearly establish an optimal dosing regimen.

The support of Cure Kids, New Zealand is acknowledged.