Prior to the discovery of insulin, a diagnosis of diabetes was fatal within a few weeks to months due to insulin deficiency. With the discovery of insulin people with type 1 diabetes were able to live productive lives for many decades. However in 2017, the life expectancy of people with type 1 diabetes is still approximately 12 years less on average than the rest of the general population (1). The Diabetes Control and Complications Trial showed us that intensive control of type 1 diabetes leads to a decrease in microvascular complications such as retinopathy, nephropathy, and neuropathy (2). The Epidemiology of Diabetes Interventions and Complications study showed that intensive blood glucose control reduces the risk of cardiovascular disease (3). The age adjusted relative risk for cardiovascular disease in people with type 1 diabetes is still 10 times that of the general population (4). The increased mortality and the burden of long-term diabetes care indicate that there is still much we need to learn about type 1 diabetes prevention, treatment and finding a true cure for this disease.

T cell mediated autoimmune destruction of pancreatic beta cells is thought to be the final pathway in the development of type 1 diabetes (5). Multiple beta cell autoantibodies are frequently present in patients with type 1 diabetes. Antigens for these antibodies include insulin, glutamic acid decarboxylase (GAD-65), islet antigen 2, and zinc-transporter 2 (6). The role of these antibodies in causing beta cell destruction is not completely understood. How this autoimmune process is triggered is not known, although both genetic and environmental factors are thought to be necessary. These holes in our knowledge are critical impairments in our ability to prevent type 1 diabetes. Figure 1 shows a diagram of the proposed mechanisms behind the development of type 1 diabetes. 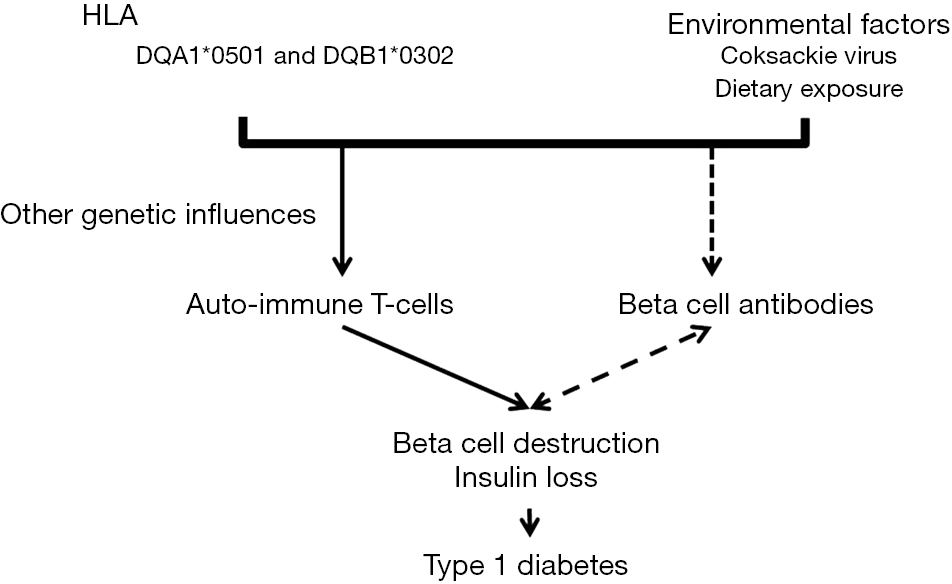 Figure 1 Proposed etiology of type 1 diabetes. Environmental factors in genetically susceptible individual trigger auto-immune T-cells that lead to beta cell destruction and insulin loss. HLA confers most of the genetic risk although genetics risk factors have been identified. It is unknown how humoral immunity and beta cell antibodies relate to beta-cell destruction. They may play an active role or may simply be a marker of ongoing destruction.

The major genetic determinants of type 1 diabetes are alleles at the HLA-DRB1 and DQB1 loci. DQA1*0501 and DQB1*0302 confer very high risk for type 1 diabetes (7). Kingery et al. have suggested a role for complement component 4 (C4) copy number variation in the development of the disease. This is interesting since the C4 gene is closely associated to the HLA locus (8). Polymorphisms in multiple other genes including the insulin gene have also been found to play a role, although their relative contribution is small (9). 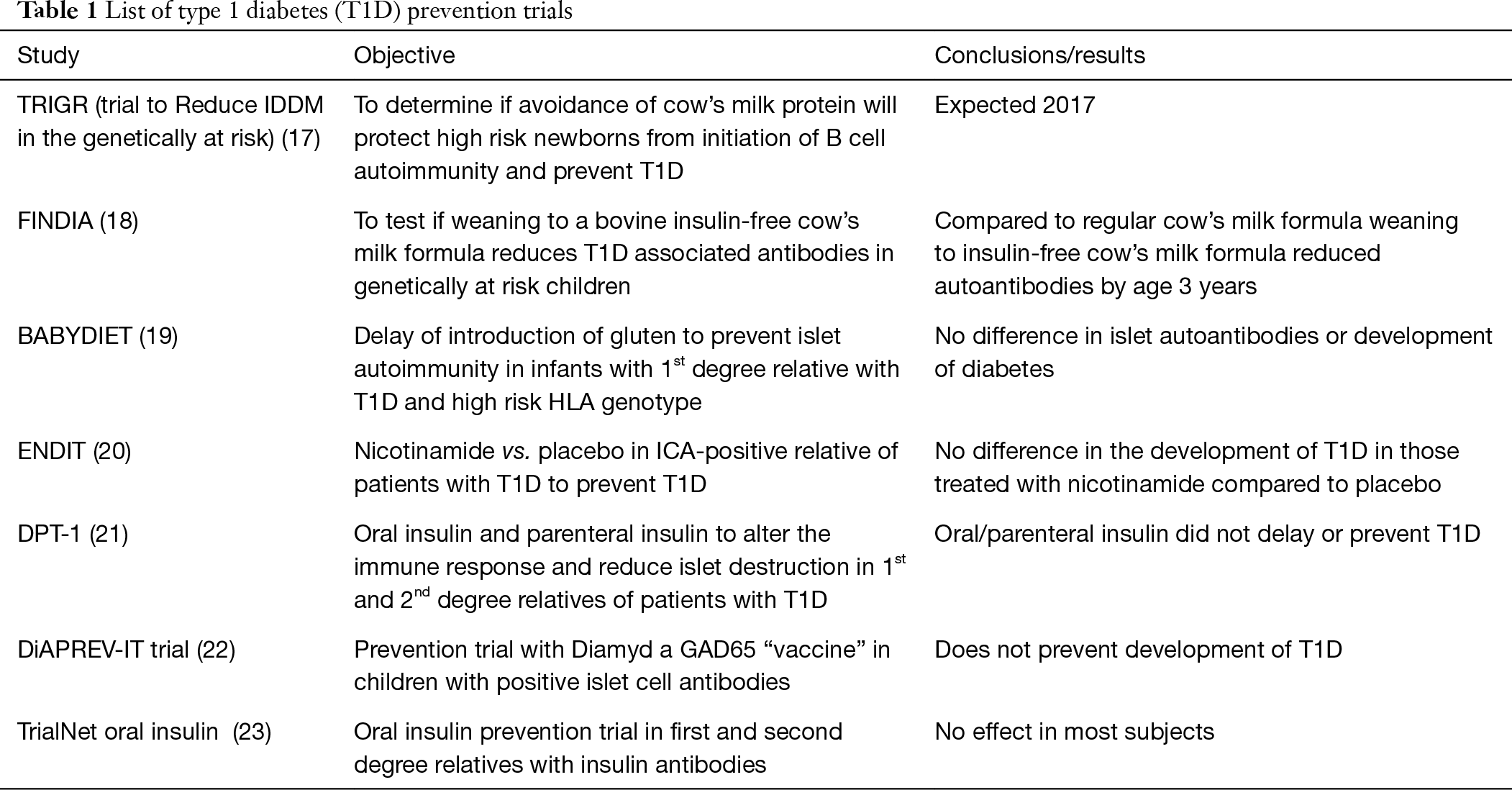 The DPT-1 involved two studies looking at parenteral insulin and oral insulin therapy for the prevention of type 1 diabetes in relatives with high or intermediate risk of developing type 1 diabetes. Neither treatment was able to prevent or delay the development of type 1 diabetes although there was a hint that oral insulin might be effective in preventing diabetes in subjects with insulin antibodies (24). A subsequent study by the Trialnet group found that oral insulin did not delay or prevent the onset of diabetes in most insulin autoantibody positive first degree relatives but did delay onset in the small subgroup with decreased insulin secretion at study onset (23). TrialNet is identifying subjects for participation in DPT-1 trials and assembling a large cohort of at-risk persons that will yield new natural history information about pre-type 1 diabetes (25).

The Trial to Reduce Incidence of Diabetes in Genetically at Risk Study, randomized genetically at risk infants to hydrolyzed formula versus cow’s milk formula and found no difference in pancreatic antibody development up to 10 years later (26). A variety of other trials using a wide variety of agents such as omega 3 fatty acids, GAD, Vitamin D, and other are in progress to evaluate their role in prevention of diabetes (27).

In patients with new onset type 1 diabetes, a variety of immunosuppressive agents have also been tried including steroids and immuran, cyclosporine, rituximab, and teplizumab. These studies have demonstrated short-term preservation of insulin secretion (27,28). It is not clear that these therapies by themselves have a favorable risk: benefit ratio. A single trial using autologous, nonmyeloablative, hematopoietic stem cell transplantation showed some benefit but included significant risks (29).

Until we come up with a means to prevent the development of type 1 diabetes we need to develop ways to improve glycemic control and ease the burden of diabetes. Research is being pursued in three main areas: new insulins and insulin delivery systems; islet cell replacement; and adjunctive therapies to insulin.

Insulin was discovered in 1921 by Frederick Banting and Charles Best. Dr. Arnold Kadish invented the first insulin pump in the early 1960s. Multiple improvements have been made to insulin pumps since that time. A meta-analysis has shown that insulin pump use does moderately improve glycemic control although not all studies agree (30,31). Another new technology in use is continuous glucose monitoring. It can be used either with an insulin pump or injection therapy. Use of continuous glucose monitoring has been shown to improve glycemic control in subjects over 24 years (32). The main reason for failure to improve diabetes control in younger subjects was failure to wear the sensor at least 6 days per week.

Combining these two technologies into an “artificial pancreas” or closed-loop insulin delivery system has been a goal for many years. Several steps have been taken along this route with the low glucose and low glucose predictive suspend pumps that stop the insulin infusion when the sensor detects a low glucose level or a rapidly falling glucose level that would lead to hypoglycemia (33). More importantly, a hybrid closed-loop insulin pump was just released in 2017 which adjusts basal rates every 5 minutes with the assistance of a continuous glucose monitor. The patient still must enter pre-meal boluses. In pre-approval studies the system has been shown to reduce hemoglobin A1C and glucose variability (34). Multiple other systems are being developed including a bihormonal system using insulin and glucagon (35).

For patients using insulin injection therapy, the variety of different insulin analogues have made it easier for insulin levels in patients with type 1 diabetes to more closely mimic those in healthy subjects (36). The use of these long acting and rapid acting insulin analogues has been associated with reduced hypoglycemia. Recent advances have led to newer insulin preparations becoming available such as extended duration basal insulin such as degludec and an ultrafast insulin aspart which are now available in Europe and Canada. The ultrafast insulin aspart will be exceptionally beneficial for the closed loop systems where the delay in insulin action is a confounder. “Smart insulins” are being developed which have a glucose responsive element that increases insulin action with increasing glucose levels (37).

Glucose responsive beta cells have been generated from human pluripotent stem cells (hPSC) and when inserted into mice secrete human insulin in a glucose-regulated manner and decrease hyperglycemia in diabetic mice (40). Manzar et al. used induced pluripotent stem cells derived from patients with type 1 diabetes to generate glucose-responsive, insulin producing cells. The cells were initially resistant to differentiation but demethylation treatment was able to increase the yield of insulin producing cells. When these cells were transplanted into diabetic mice they became normoglycemic within 28 days. Stem cells produced from self that do not require immunosuppression provide a safer more realistic possibility for future treatment of type 1 diabetes and eliminate the need for cadaveric pancreatic tissue donors (41).

Adjunctive therapies in addition to insulin are also being studied. Of particular interest is metformin, to reduce insulin resistance in overweight and obese individuals with type 1 diabetes. In overweight adolescents the addition of metformin had little benefit with reduced insulin doses and weight but no improvement in glycemic control. Subjects receiving metformin not surprisingly had more gastrointestinal side effects (42).

Sodium glucose cotransporter-2 inhibitors (SGLT2) are a class of medications used to treat type 2 diabetes. They lower blood sugar by causing the kidneys to remove glucose from the body through the urine. SGLT2 inhibitors have shown some utility in type 1 diabetes but have a higher incidence of diabetic ketoacidosis (DKA). The U.S. Food and Drug Administration (FDA) issued a drug safety communication of increased risk of euglycemic DKA with the use of all the approved SGLT2 inhibitors (43). Peters et al. looked at the incidence of DKA with the addition of canagliflozin as an add on to insulin in adults with type 1 diabetes. All episodes of DKA occurred in the presence of circumstances that are known to potentially precipitate DKA such as infection and pump failure. The blood glucose levels of the patients in DKA ranged from 170 to 800 mg/dL. Empagliflozin treatment for 8 weeks improved glycemic control and reduced hypoglycemic events, weight and insulin doses in patients with type 1 diabetes (44). Dual SGLT1 and SGLT2 inhibition with sotagliflozin was shown to improve glycemic control and the CGM profile with bolus insulin dose reduction, weight loss, and no increase in hypoglycemia in patients with type 1 diabetes (45).

Our understanding of the mechanisms that cause type 1 diabetes is still incomplete in 2017, almost 100 years after the discovery of insulin. The improvements in insulin and insulin delivery systems have allowed for better control of blood glucose levels but better therapies are still needed to prevent the devastating microvascular and macrovascular complications that can occur with long standing type 1 diabetes mellitus.