Studies regarding the epidemiology of sports injuries in youth sports are often difficult to compare as the definition of a sport-related injury varies across studies (1-8). However, most definitions include one or more of the following descriptors: time loss from practice or game, decreased level of activity, and the need for medical attention (7). Limitations of some studies include reliability of the collected data, self-report recall bias, presence or absence of an athletic trained or other qualified professional to record the injury, difficulty in determining the denominator (population at risk), and insufficient information on actual time the athlete was exposed to the risk (7).

According to a study conducted by the Centers for Disease Control and Prevention (CDC), sports injuries were defined as those (I) resulting from participation in an organized high school athletic practice or competition, (II) requiring medical attention from a certified athletic trainer or a physician, and (III) restricting the athlete’s participation for 1 or more days beyond the day of injury (1). An athlete exposure was defined as one athlete participating in one practice or competition during which the athlete was exposed to the possibility of athletic injury (1).

Time loss from game or practice is a commonly used indicator for severity of injury (2). For example: non-reportable, no time lost, 1–7 days lost (minor), 8–21 days lost (moderate), more than 21 days lost, and severe injury resulting in permanent disability (2). In addition to the number of days lost, other factors have been considered in determining the severity of injury. These factors include the nature of the injury, duration of treatment, absence from school, and cost of treatment (2). Cumulative incidence of injuries refers to the number of injuries among a specific group of athletes followed for a defined period (2,4,7). Cumulative incidence is an indicator for an individual athlete’s risk for injury; whereas, the incidence of first injury is an indicator of any one athlete being injured (2,4,7).

A widely accepted definition of sport-related injury considers athlete-exposure time. An injury, for example, may be reported as rate per 1,000 athlete-exposures. This is considered to be a more accurate measure to define an injury. An athlete-exposure is defined as one athlete participating in one practice or game, in which there is the possibility of sustaining an injury (1,4,7).

The risk for sport-related musculoskeletal injuries is modulated to some extent in adolescents by certain aspects related to growth and development. These factors are summarized in Table 1 (7).

Based on the CDC study, the overall injury rate in all high school sports combined was 2.44 injuries per 1,000 athlete exposures. American football has the highest injury rate at 4.36 injuries per 1,000 athlete exposures. In each of the nine sports for which data were collected, approximately 80% of the injuries reported were new injuries. Overall the injury rates were higher for competition compared to practice. About 50% of injuries resulted in less than 7 days of time lost from participation. No deaths were reported in the study.

Sheu et al. (2016) reported on sports and recreation related injury episodes in the United States for the period of time between 2011 and 2014 (9). Their analysis showed an average annual estimate of 8.6 million sports and recreational related injury episodes with an age-adjusted rate of 34.1 per 1,000 population. Male and individuals between 5 and 24 years of age accounted for greater than 50% of all injury episodes. Overall, injury rates were higher among males and children between the ages of 5–14 years. Approximately 50% of injuries required medical attention. General exercise was the most frequently reported activity associated with sports or recreation related injuries. Injuries to the lower extremities were most common (42%) followed by those of upper extremities (30%), and head and neck region (16%). 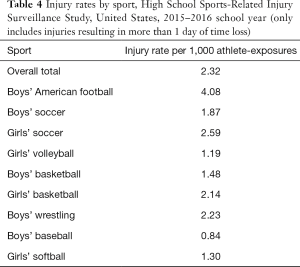 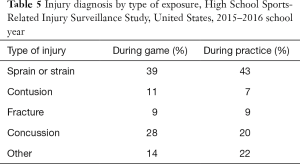 According to the National Institute of Arthritis and Musculoskeletal and Skin Diseases report there were more than 2.6 million children younger than 19 years of age who were treated in emergency departments for musculoskeletal injuries due to sport participation (11). Musculoskeletal injuries were also the most common reason for injury-related visits to primary care physicians. The most common injuries were sprains and strains, growth plate injuries, and repetitive motion injuries. Most injuries were reported in basketball followed by track and field, American football, baseball, softball, soccer and gymnastics.

According to the Youth Sports Safety Statistics report of the National Athletic Trainers’ Association there were 39 sports-participation-related deaths in young athletes in 2011 (12). Nationally, approximately 8,000 children per day were seen in emergency departments for sports-related injuries, including musculoskeletal and other injuries. According to this report, the highest rate of sports-related injury occurred in teens between the ages of 15–17 years, in remote rural settings, playing American football, and during practice. A history of previous injury was a risk factor for subsequent injury. In 2011, sport-related traumatic brain injury accounted for 15% of all injuries in high school athletes. Other significant reasons for athletes to seek medical attention included exercise-induced asthma, heat illness, exertional sickling, and infrequently spinal cord injury.

Analysis by Rosendahl and Strouse (2016) of sports-related injuries showed that factors influencing the distribution of musculoskeletal injuries were age, sex, type of sport, intensity of participation, position played, and underlying congenital conditions (13). They reported a sports injury incidence of 1 in 10 children per year with higher overall incidence and greater severity of injury in boys. The report noted that younger athletes sustained relatively milder non-specific injuries compared to older athletes. The highest incidence of musculoskeletal injuries was reported in contact and jumping sports that included American football, wrestling, basketball, soccer, baseball, skiing and snowboarding. Children under the age of 10 years were most likely to have contusions, mild sprains, and injury to growth plates. During pre-pubertal years acute or repetitive stress fractures were reported more frequently. Ligamentous injuries were more likely after skeletal maturity was attained. Sport-related musculoskeletal injuries by location reported by Rosendahl and Strouse are listed in Table 6. 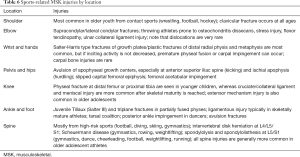 In a retrospective review, Stracciolini, et al. (2014) analyzed athletes aged 5–17 years old who presented to a sports medicine clinic over a period of 10 years (15). Results showed higher incidence of overuse injuries compared to acute traumatic injuries in females, and the opposite in males. Females tended to injure the lower extremity and spine more frequently, whereas males tended to injure the upper extremity. Hip/pelvic injury tended to be overuse or soft tissue injury in females, as opposed to traumatic or bony injury in males. Females were more likely to suffer from patellofemoral knee pain, but males were more likely to develop osteochondritis dissecans and fractures. Anterior cruciate ligament sprains were equal among sexes. Differences between sexes may be due to differential movement patterns, sport participation, strength, flexibility, physiologic and anatomic factors (biomechanics of growing joints etc.).

DiFiori et al. (2014) conducted a systematic review of trends in competitive youth sports with regards to overuse injury and burnout (14). Overuse injury is often variable with the sport, ranging from 15% in soccer players up to 68% in running. Authors noted that the incidence of such injury is still underreported. Most define injury as loss of time from sports participation and many cases of overuse injury do not cause the athlete to miss playing time. Overuse injury also varies by age: younger athletes suffer more growth-related conditions (apophysitis, physeal stress injury) as opposed to older skeletally mature athletes. All overuse injuries are not inherently benign, for example, high-risk injuries include stress fractures of the femoral neck/tarsal navicular/anterior tibial physis, as well as effort thrombosis.

Lykissas et al. (2013) conducted a cross-sectional epidemiological study of pediatric injuries presenting to the emergency department, using data collected from the National Electronic Injury Surveillance System database (16). It compares reports of sports and recreational injuries in children in the years 2000, 2005, and 2010, to determine the trends in the top eight causes of these injuries. The top eight causes of injury for children ages 5–14 years were bicycling, football, roller sports, playground equipment, baseball/softball, soccer, and trampoline. The study found that the incidence of all musculoskeletal injuries decreased over time for all eight activities (16.4 to 14.4/1,000 person-years); and sports-specific injuries were found to have decreased in 6 out of 8 activities. Maximal decrease was seen in bicycling, with a smaller decrease in football and soccer. Older children (10–14 years of age) sustained a greater proportion of injuries. This study concludes that although injury severity or overuse injury prevalence may have increased, the total incidence of acute sports/recreation-related injuries has been decreasing over the last decade.

Stracciolini et al. (2013) conducted a retrospective review of sports injuries in younger children (5–12 years of age) versus older children (13–17 years of age), to determine whether there was variation in location, severity, and diagnosis depending on age (17). The authors collected retrospective data from a sports medicine clinic over 10 years and found definitive differences between the age groups. Forty percent of the total cohort underwent surgery, which was disproportionately in older children. Younger children sustained more acute traumatic bony injuries of upper extremities. Older children sustained more overuse, soft tissue injuries of back and lower extremities.

To classify sports injuries by sex and sport, Schroeder et al. (2015) conducted a retrospective cohort study that focused on older children (approximately 14–18 years of age) with overuse injuries (18). The authors collected data from the High School Reporting Information Online study generated in the 2006–2007 and 2011–2012 school years to assess a large national sample. Authors noted that the incidence of overuse injuries in young athletes is increasing overall, attributed to increasing participation and intensity of high school sports. Their study found that incidence of acute traumatic injury was higher in boys compared to girls. They also found that girls had a higher rate of overuse injury, particularly within track and field and field hockey and girls sustained more overuse injuries of the lower extremities compared to boys. The greatest number of boys with overuse injury were seen in swimming and diving (18,19). In most sports, overuse injury was more likely to occur during practice rather than in a competition. Distinct differences were found between sexes with regards to class year—overuse injuries decreased with year in school in girls, but the trend was the opposite in boys. Although body site injured was variable, the most commonly injured areas were the lower leg, knee, and shoulder. Approximately half of all overuse injuries resulted in less than 1 week of playing time lost, with very few requiring more than 3 weeks off. Findings also were consistent with other studies reporting prior injury as a strong risk factor for subsequent injury.

Injuries sustained during physical activity, exercise, and sports activities are common in children and adolescents. While the majority of sport-related musculoskeletal injuries are secondary to repetitive overuse, patterns of injury can be modulated by growth and development and vary by age, gender, and type of sport or physical activity. Individual studies highlight the variability in injuries, but in general, boys are more likely than girls to sustain injury during sports, lower extremity injuries are more common overall, and prior injury is a strong risk factor for future injury. It remains important for practitioners to understand the epidemiology and variance of injury for their patient populations.