Cushing ulcers are acute ulcerations of the gastrointestinal tract occurring in patients with primary nervous system injury or disease (1-6). Although they have become extremely rare since the advent of stress ulcer prophylaxis, when found they typically present as single, deeply penetrating, duodenal ulcers. We report a unique case in which a Cushing ulcer was identified in an eight-month-old infant after a new diagnosis of medulloblastoma.

An 8-month-old boy conceived via in-vitro fertilization presented to our institution with 10 days of progressive vomiting, lethargy, and decreased oral intake. On neurological examination, the patient was lethargic and irritable, with an upgaze palsy. A computed tomography (CT) scan of the brain revealed a 3.5 cm × 3.5 cm × 4.5 cm hyperdense posterior fossa mass centered within the fourth ventricle (Figure 1). Subsequent magnetic resonance imaging (MRI) revealed a heterogeneously enhancing fourth ventricular mass with diffusion restriction, suggesting a high-grade neoplasm (Figure 2). MRI of the spine was negative for leptomeningeal disease. 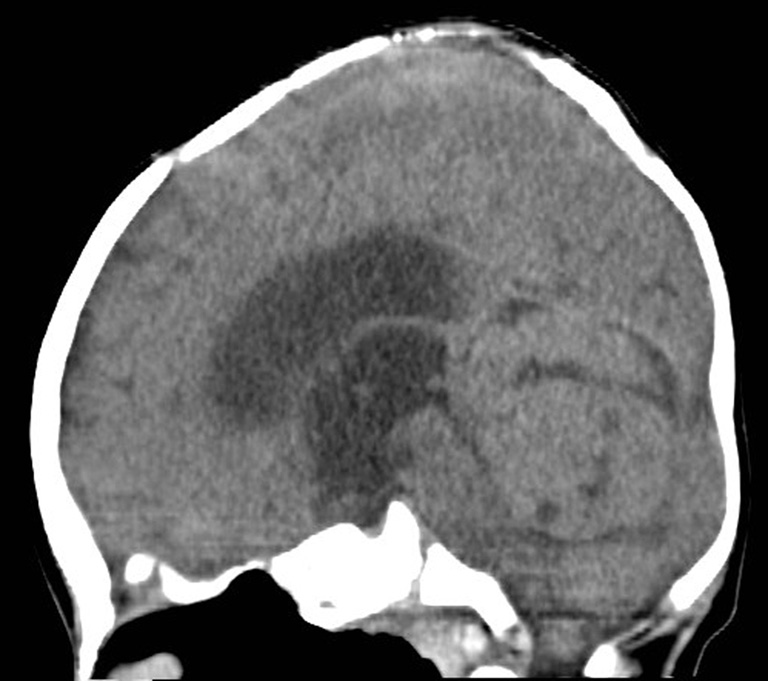 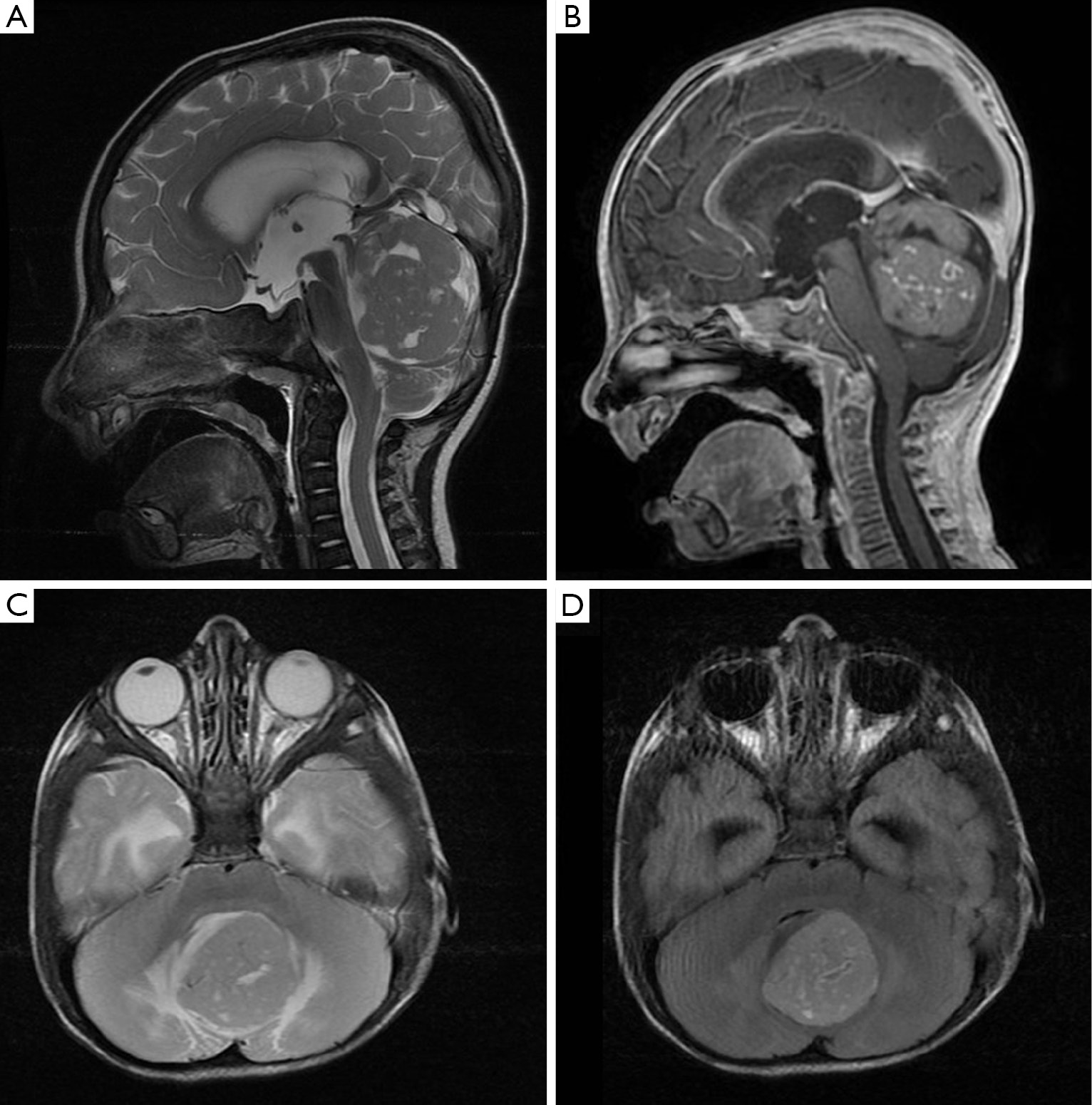 Preoperatively, the patient was started on high-dose intravenous dexamethasone (1.6 mg/kg/day) with a standard prophylactic dose of ranitidine (15 mg twice daily). The patient underwent placement of an external ventricular drain (EVD) and suboccipital craniotomy for resection of the tumor. The results of the intraoperative frozen section and permanent pathology analysis were consistent with medulloblastoma, World Health Organization (WHO) Grade IV.

The postoperative MRI demonstrated gross-total resection of the tumor, and the patient was transferred from intensive care; however, on postoperative day 2, the patient had melanotic stools and his hematocrit fell from 32.3% postoperatively to 17.3%. Upon further questioning, the family reported 3 months of occasional coffee-ground emesis and melena prior to admission. There was no history of burn, sepsis, major trauma, or prior medication ingestion. The patient was transferred back to the pediatric intensive care unit where he underwent transfusion with packed red blood cells; infusions of pantoprazole and octreotide were initiated. A pediatric gastroenterologist was consulted; upper gastrointestinal endoscopy revealed diffuse gastritis and two large proximal duodenal bulb hemorrhagic ulcers (Figure 3). Both ulcers were coagulated; however, serial hematocrit levels obtained after the procedure demonstrated a progressive decrease from 17.3% to 14.7% over 3 hours, indicating continued bleeding from the ulcers. Emergent laparotomy and duodenotomy by the pediatric surgery team revealed a continuously bleeding ulcer, which was definitively repaired by vessel ligation and an omental patch.

After the laparotomy, the patient exhibited significant symptomatic improvement and the hematocrit level stabilized. The results of further evaluation for Helicobacter pylori infection were negative. The octreotide and pantoprazole drips were discontinued, and the patient remained stable on oral omeprazole. The patient ultimately required ventriculoperitoneal shunt placement and is currently undergoing adjuvant chemotherapy for treatment of his medulloblastoma.

We report the first case of a Cushing ulcer in an infant who, despite being administered stress ulcer prophylaxis, worsened after corticosteroids were initiated. The relationship between central nervous system disease and gastrointestinal ulcers was first suggested as early as 1772 by John Hunter. In 1841, Rokitansky hypothesized that increased acid was the cause of these lesions. These ulcers were subsequently called Cushing ulcers in reference to Harvey Cushing’s hypothesis articulated in 1932 that intracranial pathology may lead to gastric ulcers in the context of injury to parasympathetic centers in the diencephalon (1).

The first case of a Cushing ulcer in an infant was reported by Sale (4) in 1956. In this report, a 10-month-old boy with seizures and meningitis was admitted to the intensive care unit and administered antibiotics without corticosteroids. Five days after the onset of symptoms, the patient began vomiting blood and was found to have a perforated duodenal ulcer requiring laparotomy and primary repair. In 1987, Ross et al. (7) reported a series of 64 children who presented during a 12-month period with posterior fossa tumors. Three of these patients developed large exsanguinating upper gastrointestinal hemorrhages within a week of tumor resection; at least one of these patients was treated with corticosteroids. The report does not state whether the other two patients had steroids administered. In all three cases, surgery was required to oversew the duodenal ulcers and perform a vagotomy-pyloroplasty (7). Since the introduction of proton pump inhibitors in 1989 (http://www.ncbi.nlm.nih.gov/books/NBK47256/), there have been no further reports of Cushing ulcers in children.

We infer from his history of several months of melena and hemoptysis that our patient likely developed duodenal ulcers secondary to increased intracranial pressure from the medulloblastoma obstructing cerebrospinal fluid outflow. Interestingly, he did not demonstrate anemia at initial presentation. The mechanism proposed by Cushing, which involves overstimulation of the vagal nuclei secondary to increased intracranial pressure and oversecretion of gastric acid, has been accepted as the most likely explanation for this phenomenon (7). Corticosteroids significantly increase the risk of gastric ulceration by decreasing the production of gastric mucus and gastric bicarbonate, both factors that protect against ulcers.

Defining optimal dosing of corticosteroids in the pediatric population

Although the recommended dose for patients with central nervous system tumors varies, the recommended starting dose is 0.5 mg/kg/day, according Glaser et al. (8) and the Kids Neuro-Oncology Workshop (KNOWS), making the dose we instituted (1.6 mg/kg/day) higher than normally recommended.

The development of Cushing ulcers in our patient despite stress ulcer prophylaxis has not been previously reported in the pediatric population. Since the introduction of H2 antagonists and proton pump inhibitors, stress ulcer prophylaxis has been used as a standard of treatment in critically ill patients (9). The history of coffee-ground emesis in this patient may have been significantly exacerbated by the initiation of a high dose of corticosteroids. There have been no studies to describe the optimal form of stress ulcer prophylaxis in patients with concomitant gastrointestinal and central nervous system disease. In retrospect, had we known of the history of coffee-ground emesis, we might have considered the use of a proton pump inhibitor in addition to an H2 receptor antagonist, although aggressive gastrointestinal prophylaxis is not without risk. Although there is a decrease in the risk of ulcer formation with the use of proton pump inhibitors, combining medications that decrease gastric acid production can result in increased patient morbidity from hospital-acquired pneumonia, Clostridium difficile infection, and drug–drug interactions (10).

In the era of stress ulcer prophylaxis, the incidence of Cushing ulcers is extremely low; however, in patients who present with new intracranial pathology and evidence of concurrent gastritis, the clinical status of the patient should be monitored closely, steroid use should be minimized, and aggressive prophylaxis utilizing a proton pump inhibitor, with or without an H2 antagonist, should be considered.

The authors thank Kristin Kraus, M.Sc., for her editorial assistance in the preparation of this manuscript.