Neurotransmitter disorders are a heterogeneous group of inherited neurometabolic disorders caused by the defects in the synthesis, degradation and transport of neurotransmitters including monoamines, glycine, and gamma-amino butyric acid (1,2). Monoamines neurotransmitters consist of catecholamines (dopamine, norepinephrine and epinephrine) and serotonin which play major roles in the control of locomotion, mood and behavior (1). The metabolic pathway of monoamine neurotransmitters is shown in Figure 1. The onset of neurotransmitter disorders can occur at any age but most commonly in infancy and childhood. The clinical presentations are mainly neurological features including dystonia, developmental delay, truncal hypotonia, dyskinesia, spastic paraparesis, choreoathetosis, oculogyric crises, seizures and autonomic dysfunctions. The clinical features are highly variable depending on the type and severity with substantial clinical overlaps among the disorders in this group. Furthermore, the clinical phenotype also mimics that of many other neurological disorders. The inheritance is mostly autosomal recessive except for autosomal dominant guanosine triphosphate (GTP) cyclohydrolase 1 (GCH1) deficiency. An accurate diagnosis has important implications as some of these disorders are readily treatable. Laboratory investigations are essential to delineate the exact diagnosis which leads to appropriate treatment and prognosis prediction (3-5). Genetic testing plays a pivotal role for diagnostic confirmation. In this article, the genetics of monoamine neurotransmitter disorders including autosomal dominant and autosomal recessive GCH1 deficiency, deficiencies in 6-pyruvoyl-tetrahydropterin synthase (PTPS), sepiapterin reductase (SR), dihydropteridine reductase (DHPR), tyrosine hydroxylase (TH), aromatic L-amino acid decarboxylase (AADC) and dopamine transporter deficiency syndrome (DTDS) will be discussed. 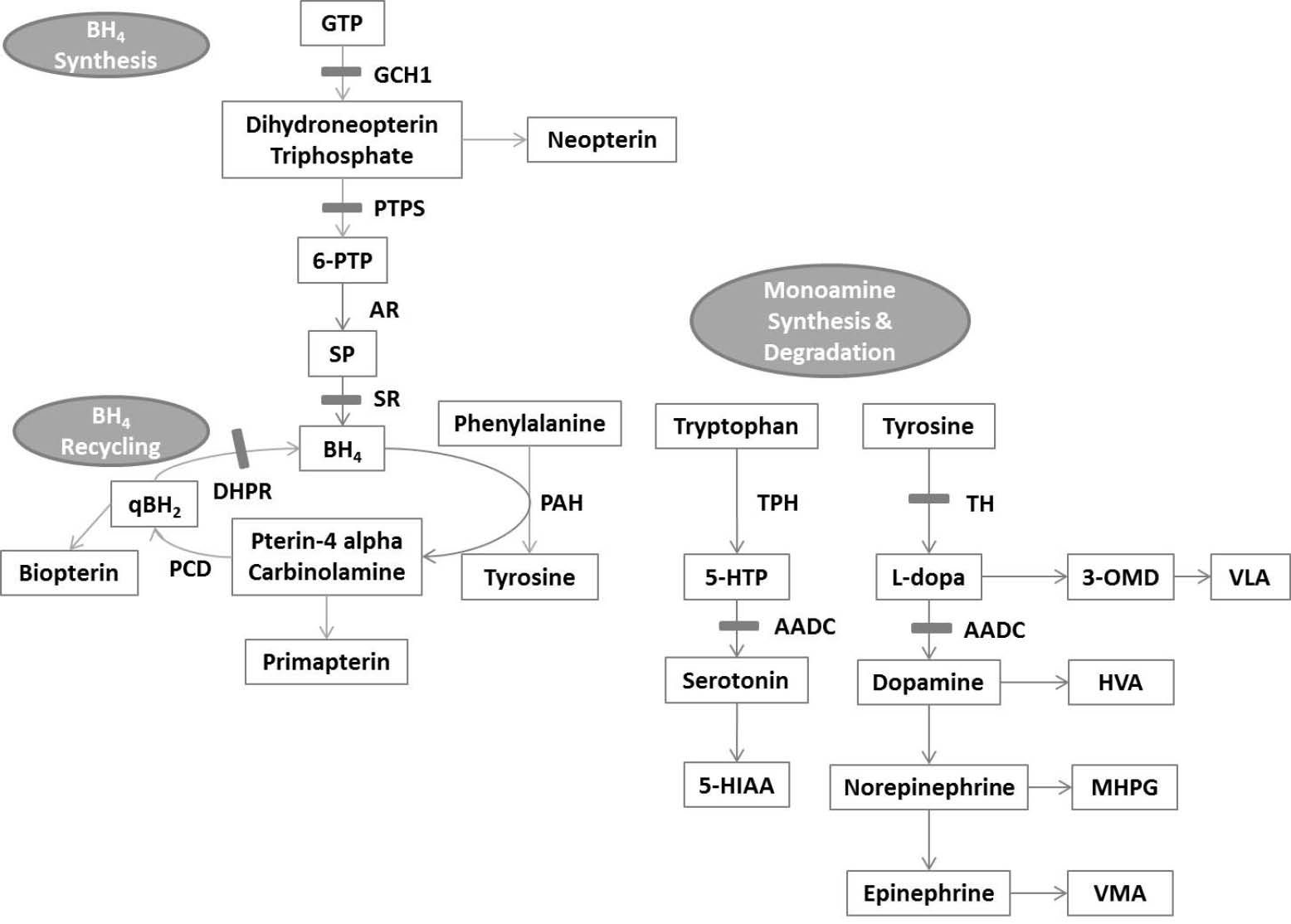 Measurement of the neurotransmitter metabolites in cerebral spinal fluid (CSF) is immensely helpful for the diagnosis of neurotransmitter disorders (1). The metabolite profile usually includes homovanillic acid (HVA), 5-hydroxyindoleacetic acid (5-HIAA), 5-hydroxytrytophan (5-HTP), 3-O-methyldopa (3-OMD), neopterin, biopterin, sepiapterin and 5-methyltetrahydrofolate (5-MTHF). HVA and 5-HIAA are the degradation products of dopamine and serotonin respectively. 5-HTP is the precursor of serotonin. 3-OMD is a metabolite of L-dopa. Neopterin, biopterin and sepiapterin are the pterin species reflecting the synthesis and regeneration of tetrahydrobiopterin (BH4). Specific pattern of changes in these metabolites can indicate a particular disorder (Table 1). 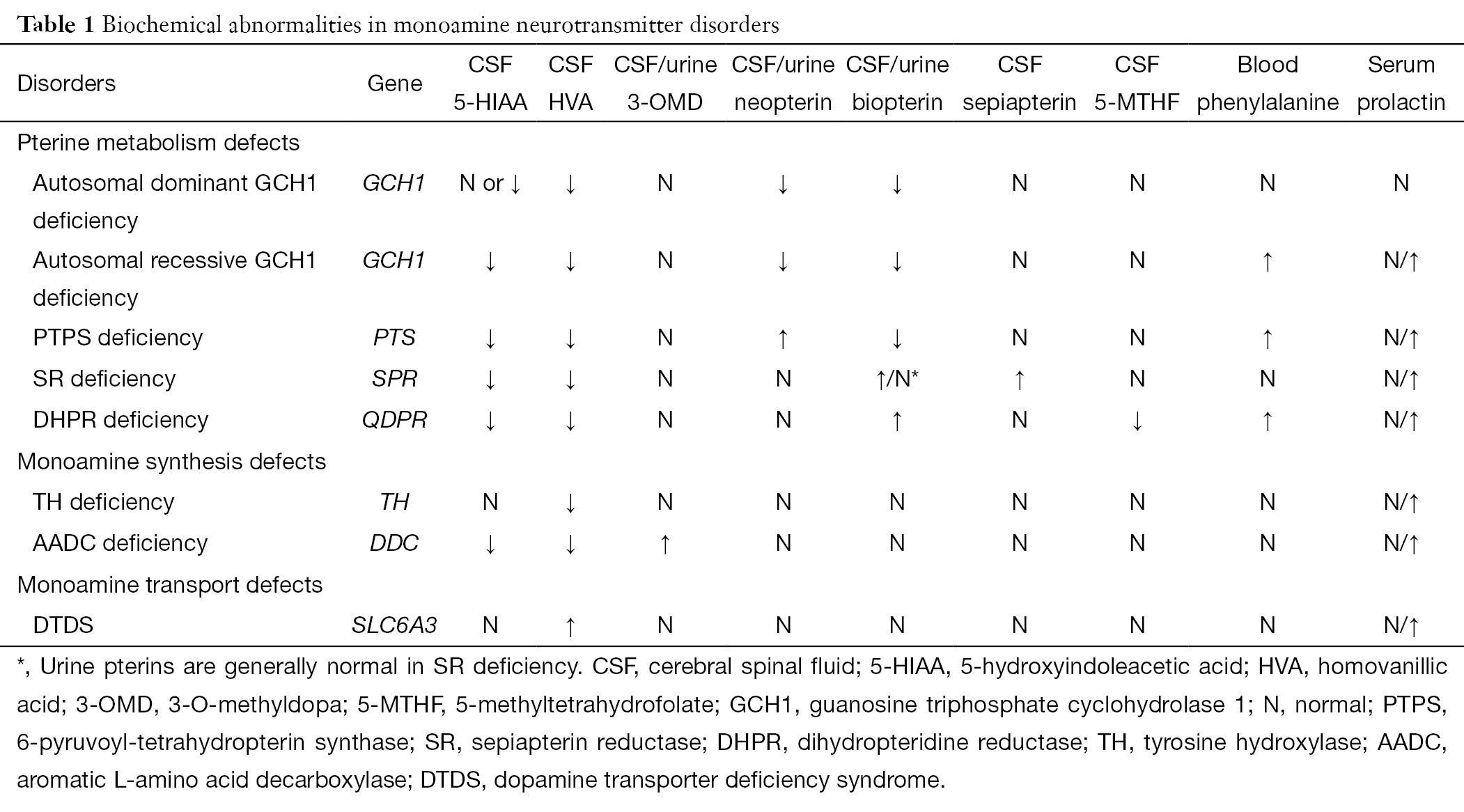 Other blood and urine investigations are useful as screening or adjuvant test for the diagnosis of neurotransmitter disorders. Measurement of pterins in urine can also give a specific pattern for some defects including deficiencies in GCH1, PTPS and DHPR (3). In AADC deficiency, elevated 3-OMD and vanillactic acid (VLA) with reduced vanilmandelic acid (VMA) would be detected in the urine metabolic profiling by gas chromatography-mass spectrometry which could be used as screening (6).

Serum prolactin is another useful marker for neurotransmitter disorders (7). Prolactin release is suppressed by dopamine and therefore in those defects resulting in dopamine deficiency, prolactin level could be elevated. High serum prolactin has been reported in cases of TH, AADC, PTPS, DHPR and SR deficiency (4,7-10). Amino acid analysis in plasma or dried blood spot should be performed to detect hyperphenylalaninemia which is present in autosomal recessive GCH1, PTPS and DHPR deficiency.

Genetic analysis is regarded to be pivotally important for diagnostic confirmation of the monoamine neurotransmitter disorders. Mutation analysis for specific genes of each disorder by polymerase chain reaction and direct DNA sequencing can provide diagnostic confirmation. The exact genetic defect determines the specific treatment protocol in individual disorders. Notably, treatment with L-dopa shows favourable outcome in autosomal dominant GCH1 deficiency and TH deficiency (5,11). In addition to facilitating proper genetic counseling and prognosis prediction, the genetic results allow assessment of recurrence risks for next pregnancy as well as prenatal diagnosis.

Autosomal dominant GCH1 deficiency [Online Mendelian Inheritance in Man mutation number (OMIM) #128230; also known as Segawa disease and dopa-responsive dystonia] is caused by heterozygous mutations in GCH1 gene (OMIM *600225) at chromosome 14q22.2. GCH1 is the rate-limiting reaction in synthesis of BH4 converting GTP to dihydroneopterin triphosphate (3). More than 90% of GCH1 deficiency is the autosomal dominant type (12). The penetrance is variable (11). The mutant exerts dominant negative on the normal allele resulting in partial BH4 deficiency (12). TH is more affected than tryptophan hydroxylase (TPH) due to its higher affinity for BH4 (11). Therefore, the clinical symptoms of dopamine deficiency dominate. CSF neurotransmitter profile would show reduced neopterin, biopterin and HVA. Urine neopterin and biopterin are both low. Blood phenylalanine would be normal. Mutational analysis by direct DNA sequencing can detect about 60% of mutations (12) while gross deletions/duplications contribute to about 5-10% cases (13-15).

Autosomal recessive GCH1 deficiency (OMIM #233910) is caused by homozygous or compound heterozygous mutations in GCH1 gene which accounts for <10% of GCH1 deficiency (12). In this type, the severe enzyme deficiency markedly reduces the synthesis of BH4, which leads to both dopamine and serotonin deficiency. The disease onset is usually early with severe clinical symptoms. Neopterin, biopterin, HVA and 5-HIAA are low in both CSF and urine. Most patients also have hyperphenylalaninemia.

PTPS deficiency (OMIM #261640) is the most common disorder of BH4 metabolism. PTPS catalyzes the conversion of dihydroneopterin triphosphate to 6-pyruvoyl-tetrahydropterin (6-PTP) in BH4 synthesis (3,16). Loss of PTPS activity substantially reduces BH4 production and results in impairment of serotonin and dopamine synthesis (16). In CSF, neopterin is elevated while biopterin, HVA and 5-HIAA were low. Urine neopterin is increased and biopterin is reduced. The serum prolactin can be raised. PTPS deficiency is caused by mutations in PTS gene (OMIM *612719) at chromosome 11q23.1 with autosomal recessive inheritance. In PTS gene, p.Asn52Ser and p.87Ser are most frequent in Asian populations. Good genotype-phenotype correlation has been demonstrated. Milder phenotypes are associated with mutations with high residual enzyme activity. Frameshift mutations and mutations affecting zinc binding or oligomerisation give rise to more severe phenotype (16).

SR deficiency (OMIM #612716) is an autosomal recessive disease implicated in the final step of BH4 and it leads to reduction in both dopamine and serotonin synthesis. The disorder is caused by mutations in SPR gene (OMIM *182125) at chromosome 2p13.2 (12). It is also shown to have certain genotype-phenotype correlation. Null mutations resulted in classic severe phenotype and missense mutations with residual enzyme activity usually have a milder phenotype. The CSF shows high levels of biopterin and sepiapterin with normal level of neopterin and low concentrations of HVA and 5-HIAA (3,17). Urine pterin profile is generally normal. The baseline phenylalanine level is usually normal because other enzymes (e.g., aldose, carbonyl and dihydrofolate reductase) in peripheral tissue maintain sufficient BH4 concentration for adequate phenylalanine hydroxylase (PAH) activity. Serum prolactin might be raised.

DHPR deficiency (OMIM #261630) is caused by mutations in QDPR (OMIM *612676) at chromosome 4p15.32 with autosomal recessive inheritance. DHPR deficiency is the defect in the regeneration pathway of BH4 leading to BH4 deficiency as well as inhibitory effect of q-dihydrobiopterin (qBH2) on AADC, PAH, TH and TPH. These result in hyperphenylalaninemia and reduced production of dopamine and serotonin (18). Folate is also depleted in the brain because DHPR is important in maintain folate in its active form (19). The natural course is more severe than other disorders of pterin metabolism. Concentrations of HVA, 5-HIAA and 5-MTHF are low and biopterin concentration is raised in CSF (3). Blood phenylalanine is elevated. High serum prolactin has been reported. Two mutations, p.Gly151Ser and Phen2112Cys are reported to have mild disease presentations with selective impairment of serotonin metabolism (20).

TH deficiency (OMIM #605407) is caused by mutations in TH gene (OMIM *191290) on chromosome 11p15.5 with autosomal recessive inheritance. The mutations lead to enzyme defect involving the conversion of tyrosine to L-dopa which is the rate-limiting step in catecholamine synthesis. Therefore, the clinical symptoms arise from cerebral catecholamine deficiency (21). In CSF, HVA level is decreased but 5-HIAA remains normal with a notably low ratio of HVA to 5-HIAA. Serum prolactin could be elevated and galactorrhea has been reported in patients with TH deficiency (7). The reported TH mutations were almost exclusively missense mutations with partial loss of enzyme activity and mutations in promoter region (5). No homozygous or compound heterozygous truncating mutations have been reported and knock out mouse model suggest complete loss of TH would be fatal (22). Pathogenic mutations in promoter region are associated with milder phenotype as it is associated with notable residual TH activity in the presence of reduced TH transcription (5,23). A cohort of eight unrelated Chinese TH deficiency patients was reported in Hong Kong with p.Arg233His being the most frequently detected mutation and TH deficiency was recognized to be the commonest neurotransmitter disorder in the region (24).

AADC deficiency (OMIM #608643) is an autosomal recessive disorder caused by mutations in DDC gene (OMIM *107930) on chromosome 7p12.1. The disorder is due to the defect in the enzyme that catalyzes the decarboxylation of L-dopa and 5-HTP into dopamine and serotonin respectively, with pyridoxal 5'-phosphate as cofactor. The clinical features reflect severe combined dopamine and serotonin deficiency (4). Characteristic CSF findings include low levels of HVA and 5-HIAA and elevated 5-HTP and 3-OMD. High concentration of 3-OMD and VLA with low VMA are detected in urine which could be used as a rapid screening tool (6). Elevated serum prolactin has been reported in some patients. The splice-site mutation c.714 + 4A > T (IVS6 + 4A > T) is a founder mutation in Chinese (25). There is no reported genotype-phenotype correlation.

DTDS (OMIM #613135) is caused by homozygous or compound heterozygous mutations in SLC6A3 (OMIM *126455) on chromosome 5p15.33 with autosomal recessive inheritance (26). SLC6A3 encodes for dopamine transporter and the SLC6A3 mutations impair dopamine presynaptic reuptake of dopamine resulting in dopamine excess in synaptic cleft. Meanwhile, it also leads to depletion of presynaptic dopamine stores and possibly downregulation of postsynaptic dopamine receptor function. As a result, the dopaminergic neurotransmission is impaired (27). With the accumulation of synaptic dopamine, HVA concentration in CSF is high with a normal 5-HIAA level as the serotonin synthesis pathway is not affected. Therefore, raised ratio of HVA to 5-HIAA is characteristic to DTDS (26,28). Missense mutations account for 61% of pathogenic mutations in SLC6A3 gene and no hotspot mutations has been reported (28).