Over the past 2 decades, Candida parapsilosis (C. parapsilosis) has become the second or the third most common Candida species from blood cultures worldwide and C. parapsilosis infection has been a persistent public health problem with great impact on the health care-associated costs and attributable mortality (1,2). In the UK and North America, Candida species accounts for more than 1/4 of all invasive fungal infections in low birth weight infants and Candida species infection has been a leading cause of neonatal mortality (3). Available studies have revealed the important differences among non-albicans species and Candida albicans (C. albicans), challenging the notion that lessons learned from study of C. albicans will be broadly applicable to other pathogenic Candida.

Fluconazole is generally effective for the treatment of candidaemia/invasive candidiasis (C/IC), but its wide use in clinical practice may be hampered by a potential increase in the infection of fluconazole-resistant Candida spp. (4-6).

It is difficult to investigate the optimal therapy for C. parapsilosis complex infection in randomized controlled clinical trials, and well-designed observational studies become important sources of findings on the therapy of C. parapsilosis complex infection. We present the following article in accordance with the STROBE reporting checklist (available at http://dx.doi.org/10.21037/tp-20-37).

A total of 58 newborn infants with C. parapsilosis bloodstream infection (BSI) were admitted to the Department of Neonatal Pediatrics of Shanghai Children’s Hospital between 2014 and 2018, and these patients were included for retrospective analysis. There were 33 males and 25 females; 37 were born by cesarean section and 21 by natural delivery; the average gestational age was 32.6±3.5 weeks (range, 27–42 weeks) and the average birth weight was 1,869±836 g (range, 860–3,850 g). In addition, there were 6 full-term infants and 52 premature infants; 22 patients had very low birth weight and 6 had extreme low birth weight. The maternal diseases were as follows: premature rupture of membranes (n=16), gestational diabetes (n=7), gestational hypertension with or without eclampsia (n=8), Hashimoto thyroiditis (n=1), hypothyroidism (n=1) and gestational diabetes with hyperthyroidism (n=1).

The diagnostic criteria for fungal septicemia in neonates were as follows (7): (I) the culture of venous blood samples collected from at least 2 different sites showed C. albicans; (II) patients had clinical characteristics of sepsis, including changes in body temperature, feeding intolerance, weight loss, apnea and other manifestations.

According to the initial antifungal drugs used, the patients were divided into fluconazole group (n=30) and voriconazole group (n=21); after 7–10-day treatment, the anti-fungal drugs were replaced if blood fungal culture still showed positive. Fluconazole was intravenously administered at 12 mg/kg/dose, once daily, and voriconazole was intravenously administered at 7 mg/kg/dose, twice daily. Treatment continued for 2 weeks after blood culture showed negative. In the fluconazole group, 20 received voriconazole treatment after blood culture showed still positive following fluconazole treatment for 7–10-day, and the protocol of voriconazole treatment was above mentioned. In the case of fungal infection of central nervous system or other sites, the course of treatment was 4–12 weeks longer. The study was conducted in accordance with the Declaration of Helsinki (as revised in 2013). The study was approved by institutional board of Shanghai Children’s Hospital (NO.: 2020R046-E01) and informed consent was taken from all the patients.

The clinical characteristics (such as gestational age, birth weight, obstetric conditions, clinical symptoms at onset, high-risk factors, clinical manifestations and complications) were collected based on medical records and compared between two groups. The time to blood culture showing negative, time of treatment for fungal sepsis, and the ratio of blood culture showing negative within 8 days after treatment were determined and compared between two groups.

CLS (M27-A) protocol was used to determine the sensitivity to amphotericin B (AmB), fluconazole, 5-fluorocytosine (5-Fc), voriconazole, micafungin (MCF) and itraconazole (ICZ) by determining the minimum inhibitory concentration (MIC). The drug sensitivity was assessed according to the European Committee on Antimicrobial Susceptibility Testing (EUCAST) and American Clinical and Laboratory Standards Institute (CLSI) criteria (8).

There were no significant differences in the general demographic characteristics (gender/age in days/gestational age/weight), maternal and intrapartum factors (delivery method/gestational diabetes/gestational hypertension/asphyxia/premature rupture of membranes) between voriconazole group and fluconazole group (P>0.05) (Table 1). 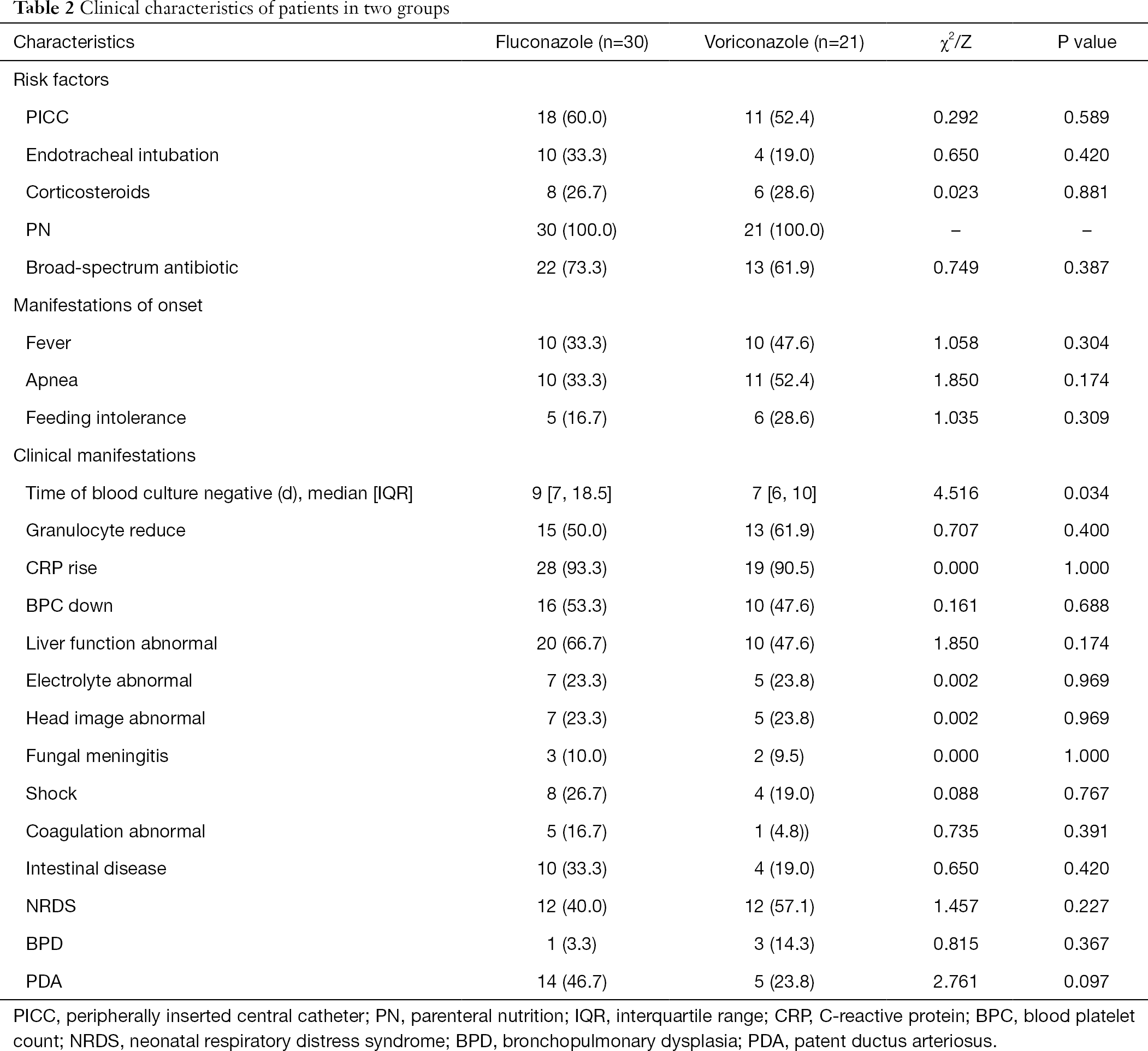 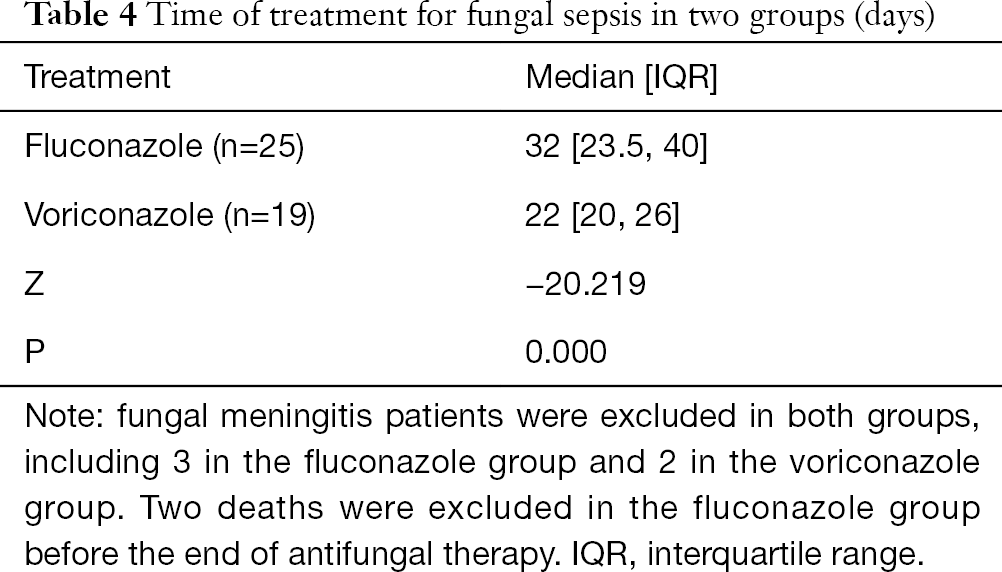 Fungal BSI is an important morbidity in neonates with the mortality ranging from 21% to 76% (9,10). The candidaemia accounts for 30–50% of causes of fungal BSI related death, which is significantly higher than that reported after most bacterial infections (11). C. albicans is the most common fungus, followed by C. parapsilosis. In recent years, the incidence of infection caused by C. tropicalis and C. glabrata is increasing. Recent studies have reported that C. parapsilosis has become the first or second cause of candidaemia in the Latin America, Asia and Europe (12-15).

Early diagnosis and aggressive treatment improve the outcome of fungal BSI, which is mainly based on isolation of predominant fungus and drug sensitivity test. The symptoms of suspected fungal BSI include fever, lethargy, thrombocytopenia, glucose instability, feeding intolerance, increased requirement for mechanical ventilation and apnoea. Our results showed the symptoms of suspected C. parapsilosis BSI varied among individuals and were characterized by fever (27.4%), apnea (25.5%) and abdominal distension (27.4%).

The treatments of candidemia and other infections of invasive candidiasis is still a challenge in clinical practice. The most common first-line treatment is fluconazole, followed by lipid formulation AmB, caspofungin, voriconazole and other antifungal drugs. The prophylactic use of fluconazole is still controversial (22-24). In the present study, the incidence of fluconazole resistance was high in the initial treatment of C. parapsilosis infection with fluconazole. A recent study found that more C. parapsilosis were resistant to fluconazole as compared to C. albicans (16/32 vs. 1/16, P<0.003 Fisher exact test) (25). AmB deoxycholate is the second most commonly used antifungal drug. In the 2016 America guideline for the management of candidiasis, AmB deoxycholate (1 mg/kg/d) is recommended for the treatment of disseminated candidiasis in neonates. Limited evidence shows the lipid formulation of AmB is preferred because of its high toxicity (26,27). This guideline also recommends the initial treatment of candidiasis with echinomycin antifungal drugs, but these antifungal drugs are not yet very accessible due to its high cost. The adverse events are largely unknown in neonates, but they may include hepatitis and electrolyte abnormalities.

In our study, the initial use of voriconazole achieved good clinical response: rapid presence of negative blood culture, fewer complications and almost no seriously adverse reactions. Despite the in vitro drug sensitivity test showed the C. parapsilosis was sensitive to fluconazole, some patients developed resistance to fluconazole during the clinical treatment. Because MIC interpretive breakpoints for fluconazole and Candida spp. from the clinical data came largely (80%) from mucosal infections and there were very few infections involving strains with elevated fluconazole MICs (28). Loss of allelic variation in the ERG11 promoter may result in a resistant strain that is homozygous for the mutated gene (29).

Voriconazole is a synthetic second-generation, broad-spectrum triazole derivative of fluconazole. It can inhibit the cytochrome P450 (CYP)-dependent 14α-sterol demethylation in the fungi, thereby disrupting the biological synthesis of ergosterol. In Europe, intravenous and/or oral voriconazole is recommended for the treatment of invasive aspergillosis, candidaemia in non-neutropenic patients and fluconazole-resistant serious invasive Candida spp. infection in paediatric patients older than 2 years. Voriconazole is metabolized by hepatic CYP2C19 (the major route). The most common adverse effects of voriconazole include visual disturbance, neurologic/psychiatric disorders, hepatotoxicity, gastrointestinal effects, and skin disorders (30). In the present study, some patients developed mild to moderate liver damage, nearly no kidney damage and mild electrolyte imbalance after 3-day intravenous voriconazole treatment; only 2 patients showed temporary fundal vascular tortuosity or thinning, and all the patients were generally well tolerant. The median time to negative blood culture in the voriconazole group was also significantly shorter than in the fluconazole group; the incidence of negative blood culture after 8-day treatment was higher in the voriconazole group than in the fluconazole group; the complications and adverse effects were comparable between two groups. These findings indicate that the therapeutic effects of voriconazole are superior to those of fluconazole in the treatment of C. parapsilosis BSI.

In conclusion, voriconazole are safety and efficacy in the treatment of C. parapsilosis BSI. Our findings provide a new option for the management of invasive fungal infections and offer evidence on the clinical studies of anti-fungal treatment.

Funding: The work was funded by the Clinical Pharmacy Innovation Research Institute of Shanghai Jiao Tong University School of Medicine (2019) (No. CXYJY2019MS003).

Reporting Checklist: The authors have completed the STROBE reporting checklist. Available at http://dx.doi.org/10.21037/tp-20-37

Conflicts of Interest: All authors have completed the ICMJE uniform disclosure form (available at http://dx.doi.org/10.21037/tp-20-37). The authors have no conflicts of interest to declare.

Ethical Statement: The authors are accountable for all aspects of the work in ensuring that questions related to the accuracy or integrity of any part of the work are appropriately investigated and resolved. The study was conducted in accordance with the Declaration of Helsinki (as revised in 2013). The study was approved by institutional board of Shanghai Children’s Hospital (NO.: 2020R046-E01) and informed consent was taken from all the patients.