Bronchopulmonary dysplasia (BPD) is one of the most common and severe respiratory diseases in preterm infants, especially those of extreme preterm birth and very low birthweight, and was thought to be a chronic progressive lung injury, along with pulmonary parenchyma and vascular changes (1). Compared to non-BPD children, children with BPD have a significantly higher risk of pulmonary dysfunction, speech impairment, cerebral palsy, hearing and vision impairment like in retinopathy of prematurity, and long-term cognitive dysfunction (2,3). BDP prevalence varies widely across different countries, ranging from 10% to 89% worldwide. A study in China showed that BPD affects up to 82% of the population of infants with a gestation age from 24 to 28 weeks (4). The main reasons of this phenomenon include the different diagnostic criteria in studies, infants involved with different gestational ages and weights, and the various diagnosis and treatment strategies applied in different centers (5). Thus, it is very important to define the incidence of BPD, and to unify the diagnostic criteria and treatment strategies for the clinical management of very premature infants and the study of new treatment options (3). Northway was first to describe the clinical manifestations of BPD and its typical X-ray findings in near-term infants in 1967 (6), but the lung X-ray findings are no longer used as a criterion for assessing the severity of BPD at present (7). There are many studies focusing on the clinical prediction models and biochemical predictors of BPD, but only a few studies on the changes in lung ultrasound images (8). In recent years, with the development of ultrasound diagnostic technology, the value of ultrasound in lung diseases has gradually been recognized, especially in the newborns (9). The study presented here investigated the diagnostic value of lung ultrasound findings in preterm infants with BPD.

We conducted a retrospective, single-center study of preterm infants. The data of preterm infants with a gestational age ≤28 weeks or a birth weight ≤1,500 g, who were admitted to the Chengdu Women’s and Children’s Central Hospital, between June 2018 and June 2019, were collected.

The diagnostic criteria for BPD were infants with oxygen dependence (<0.21) 28 days after birth and a gestational age less than 32 weeks (10). According to fraction of inspiration (FiO2) at 36 weeks’ gestational age or at discharge, we divided BPD levels as follows: (I) mild, without oxygen; (II) moderate, FiO2 <0.30; (III) severe, requires FiO2 >0.30 and/or continuous positive airway pressure (CPAP), or mechanical ventilation. 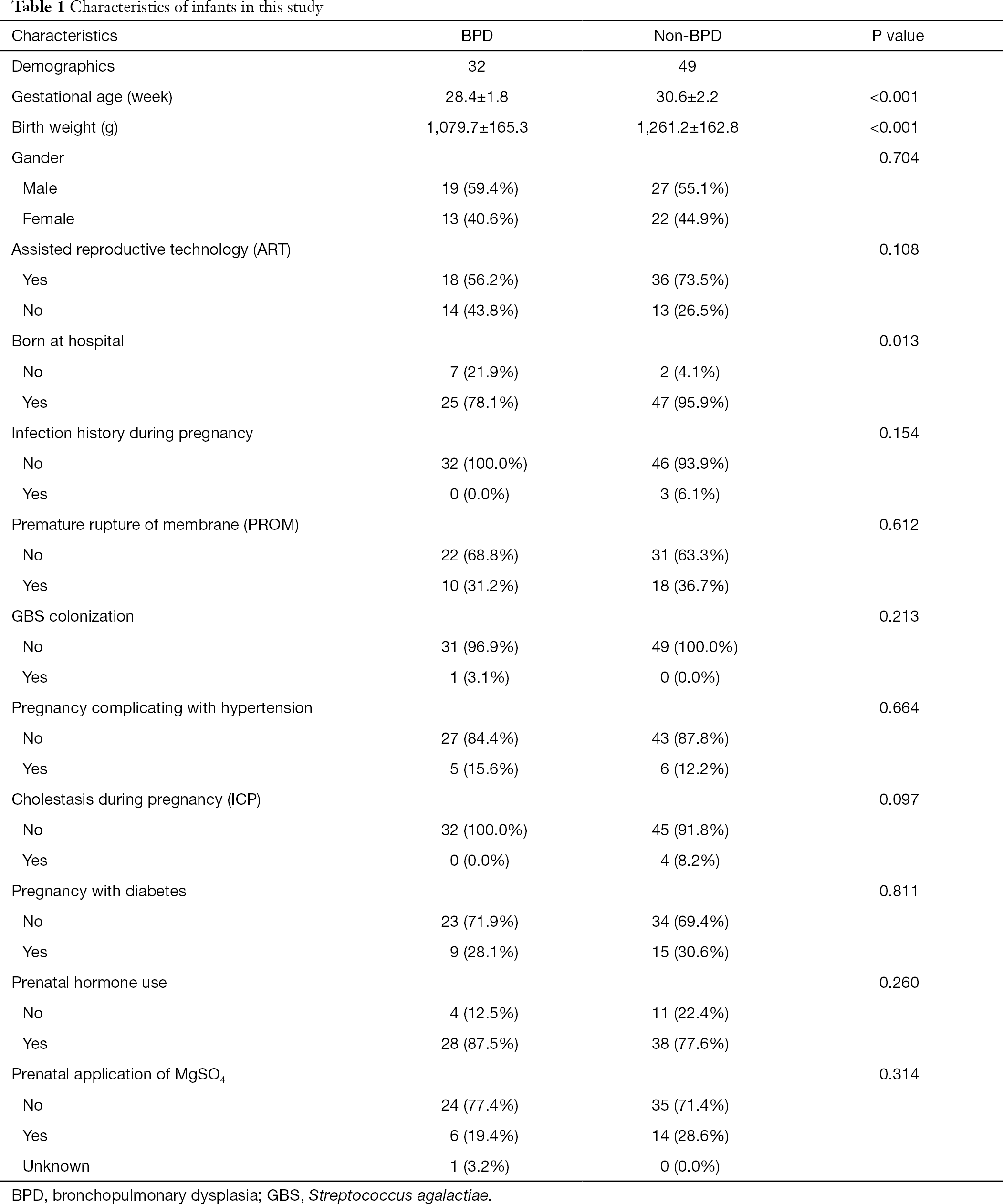 Table 1 Characteristics of infants in this study
Full table

According to the lung ultrasound acquisition standard described in previous work (11), we developed the standard in our center. First, children were supine to check the anterior chest to see whether there was pneumothorax or other symptoms. Then, the scan was extended to the lateral chest to check whether there was pleural effusion or lung disease. Finally, patients lay in the lateral or prone position so the presence of pleural lesions and consolidation could be determined according to the pathogenetic condition. We distinguished pneumothorax, pleural effusion, pulmonary edema, pulmonary consolidation, atelectasis, and other disease according to the signs of pleural slip, A line, B line, lung point, bronchial inflation, and so on. Each side of the chest wall was divided into 6 sections based on the parasternal line, anterior axillary line, posterior axillary line, and extension line of double nipple, which included the anterior upper, lower anterior, lower axillary, upper axillary, posterior upper, and lower posterior sections, and recorded as L1-6 and R1-6 images, respectively. Cross-section and longitudinal-section audiograms were acquired and marked, and surface signs were labeled if necessary. We took at least 12 images in double-picture mode. Lung ultrasound was acquired once a week from 3 weeks after birth to discharge. Statistics were accumulated for abnormal changes in ultrasound findings. The specification of lung ultrasound diagnosis of BPD was listed as follows: (I) changes in pleural line such as interruption, disappearance, thinning, and thickening; (II) presence of B line which indicated fusion or alveolar interstitial syndrome (Figure 1); (III) a section of pulmonary consolidation with subpleural structure disorders, fragment-like strong echoes, and irregular weak echo areas visible below (Figure 2); (IV) pleural effusion; (V) radiographic evaluation of various complications, such as lung abscess; (VI) the presence of slippery lung syndrome. 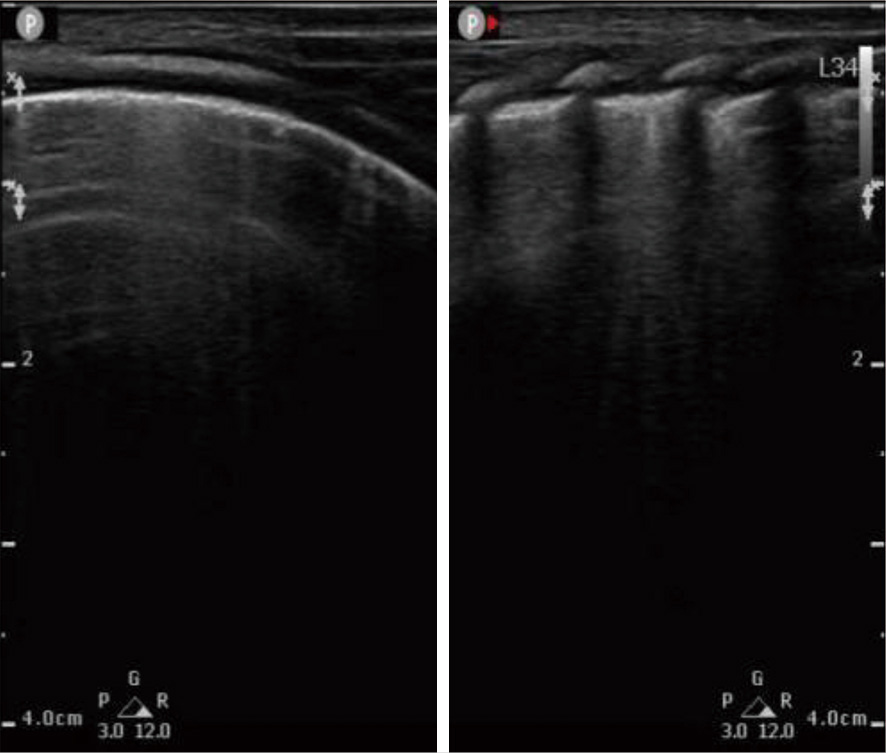 Statistical analysis was performed using SPSS, version 19.0 (IBM Corp). The mean of normal distribution was assessed with measurement data presented as a percentage. The median (maximum and minimum) was estimated in non-normal distribution data. Factors such as gender, gestational age, birth weight, asphyxia, and complications were assigned to variables, and univariate analysis was performed to calculate the odds ratios (OR) and their 95% confidence intervals (CI). Logistic multiple regression analysis was performed on the multiple factors above to calculate OR and its 95% CI. Results with P<0.05 were considered statistically significant. 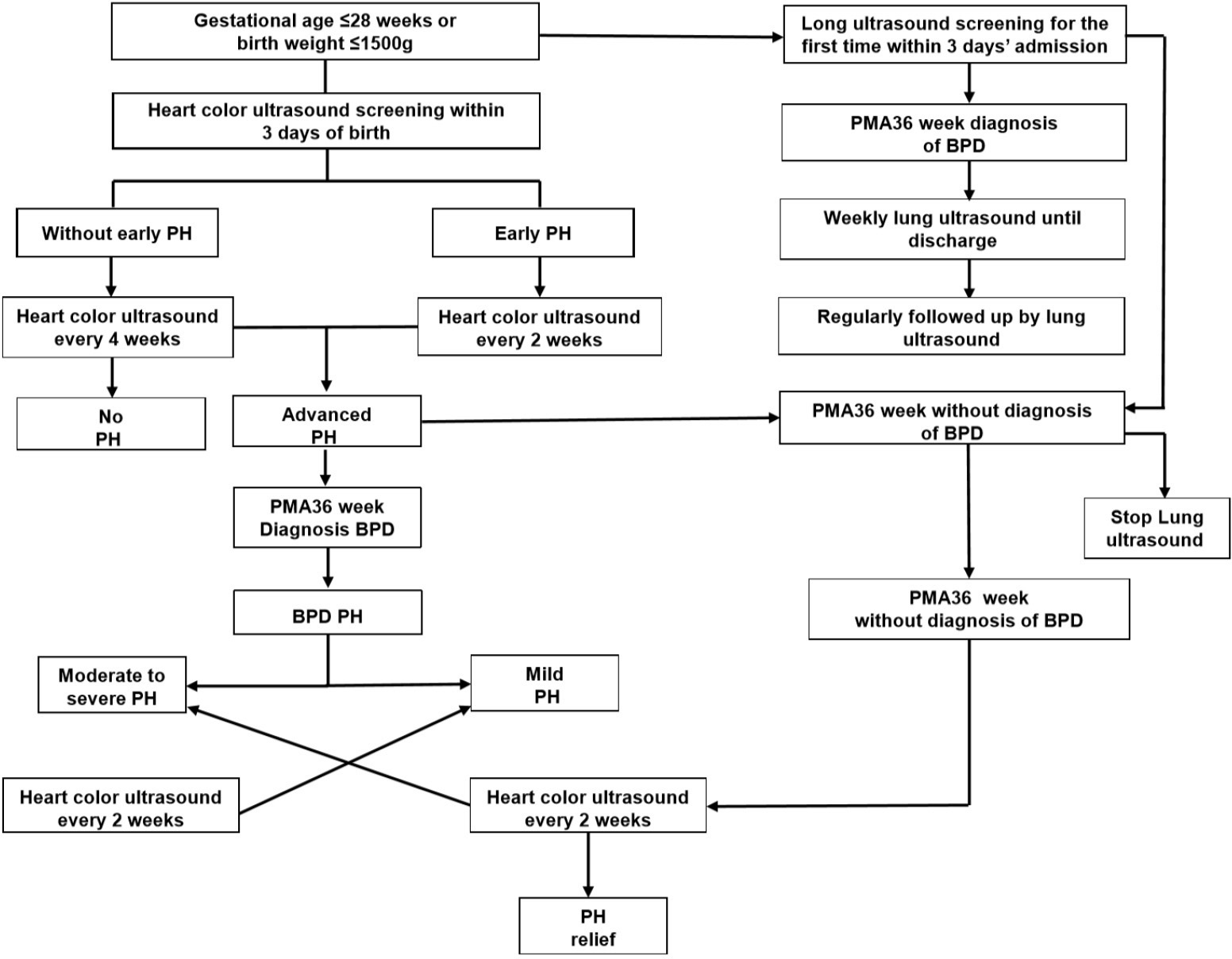 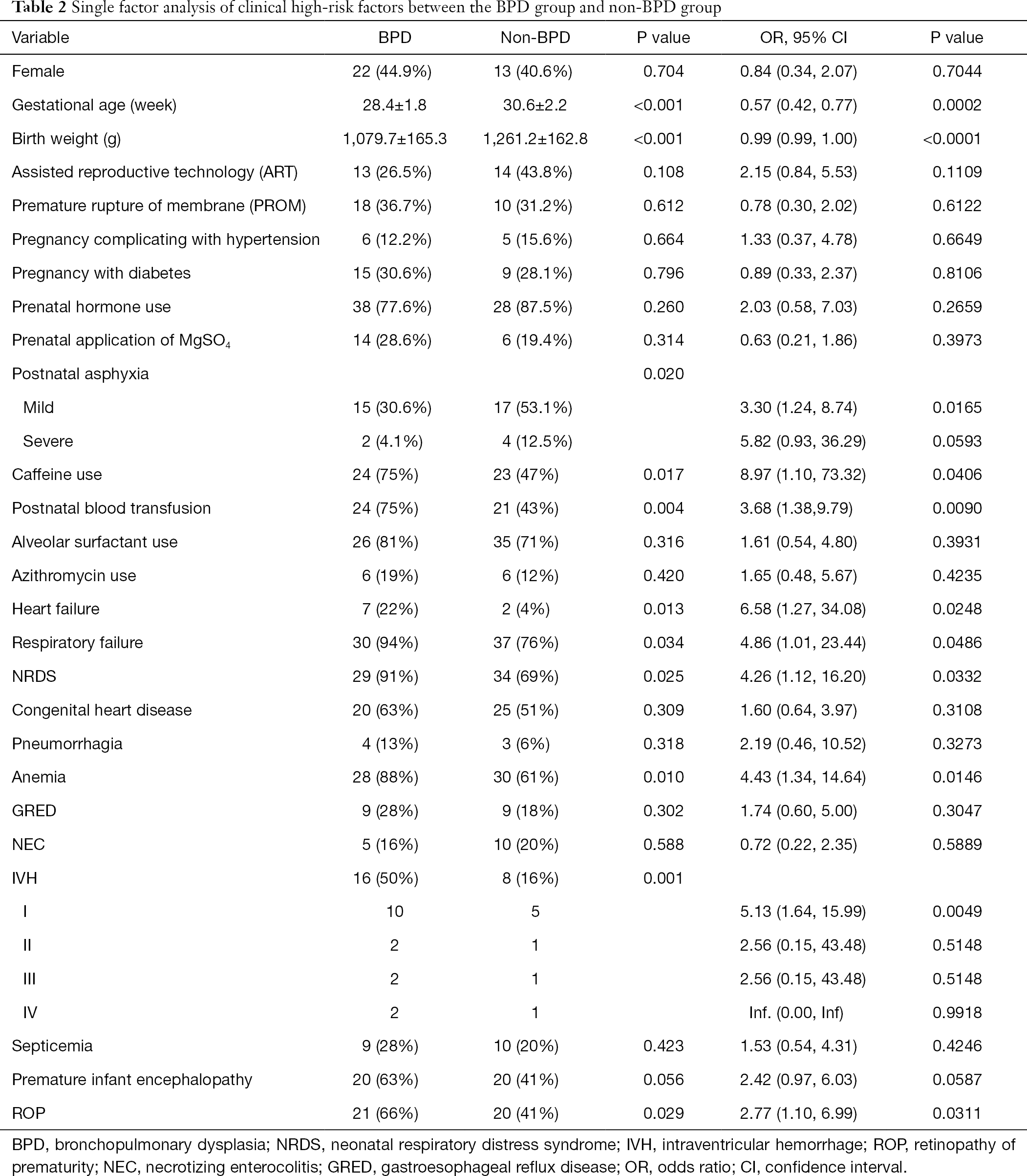 Multivariate analysis of clinical data in the BPD group (Table 3)

Currently, the consensus BPD definition is the one proposed in 2000 by the National Institute of Child Health and Human Development (NICHD) (10) whose main diagnostic criterion was infants acknowledged to have been treated with oxygen for over 28 days and at 36 weeks’ corrected age. Research indicates that assessment of oxygen dependence can be used to identify the mild, moderate, and severe categories of BDP, but is insufficient in predicting risks for adverse neurodevelopmental outcomes that occur during follow-up (12). Studies on BPD from the past 50 years suggest that BPD is mainly caused by mechanical ventilation injury in the near full-term infants at the early stage, while a new kind of BDP often occurs in infants ≤28 weeks’ gestational age, with or without mild lung disease at birth, and with no oxygen or low-oxygen treatment being required. However, oxygen dependence gradually develops during hospitalization, with symptoms such as alveolar hypoplasia, disturbance of vascular development, fibrosis of the vesicle wall, and small airway epithelium injury, along with histopathological changes such as reduced alveolar number, increased alveolar volume, simplified alveolar structure, and abnormal microvascular morphology (7,13). Even the cure rate for premature infants is increasing, but the incidence of BPD varies in clinical studies due to the lack of uniform diagnostic criteria (5). According to the study by the NICHD, the incidence of BPD was 39.5% in the group of 81 infants (gestational age ≤28 weeks, birth weight ≤1,500 g), which is quite similar to the recent data in China (14).

In our study, the gestational age of BPD was mainly at 28 weeks and with few very premature infants, so it cannot be further analyzed based on different gestational ages. Although we have developed many imaging diagnostic techniques, such as chest radiography, lung computed tomography (CT), lung ultrasound, and lung magnetic resonance imaging (MRI) (15,16), there are few reports discussing the value of different BPD imaging diagnoses (8). Here, we used lung ultrasound technology to test the changes in lung images for infants (gestational age ≤28 weeks, birth weight ≤1,500 g) and discovered that lung ultrasound findings with “debris” sign could be an independent risk factor for BPD disease. Furthermore, due to the advantages of emitting no radiation, being portable, providing convenient bedside monitoring, and being easy to grasp by clinicians, lung ultrasound could be widely used in clinical work (17). A study by Avni et al. showed that infants with ultrasound sonographic images similar to hyaline membrane disease (HMD) had a negative predictive value of 95% for BPD assessment in the future (18). A similar study indicated that sonographic results on the ninth day after birth also had a prediction of BPD in the long term (19), while other research found that lung ultrasound scores can predict the occurrence of BPD within 1–2 weeks of birth (20). Reviewing 26 clinical prediction models for BPD, Onland et al. found that the risk factors and multiple diagnostic models for predicting BPD proposed in the current study are of low diagnostic value [area under the curve of the receiver operating characteristic curve (AUC of ROC) =0.5–0.76]. Moreover, these prediction models had not been applied in clinical work, and little research had confirmed further whether these models’ application could improve clinical decision or affect prognosis (21). Most of these investigations focused on the prediction of gestational age, birth weight, gender, Apgar score, mean oxygen concentration, maximum oxygen concentration, peak inspiratory pressure, and oxygenation index, but did not mention image changes in the diagnosis value of BPD. Therefore, our present study focused on ultrasound application in BPD diagnosis and found that the BPD-related lung ultrasound findings can be further used as a reference for BPD diagnosis, and may also provide a means to identify lung lesions in the early stage.

Limitations of this study may include the small sample size, the small number of special ultrasound signs, and no specific analysis on the occurrence time of characteristic ultrasound images. At present, there is still a controversy over the standardization and quality control of lung ultrasound images, and thus more clinical research to make standardized image acquisition and reading specifications is required.

Ultrasound, an auxiliary diagnostic method for lung diseases, is widely reported to have the advantages of a lack of radiation, simple operation, and easy follow-up. In this study, we deepened the understanding of the characteristic lung ultrasound findings for BPD through analyzing numerous ultrasonic images of very premature infants. We hope this research can facilitate further exploration into the diagnosis and prediction of BPD in the future.

Funding: This work was supported by the Natural Science Foundation of China (81571480).

Conflicts of Interest: All authors have completed the ICMJE uniform disclosure form (available at http://dx.doi.org/10.21037/tp.2020.03.14). The authors have no conflicts of interest to declare.

Ethical Statement: The authors are accountable for all aspects of the work in ensuring that questions related to the accuracy or integrity of any part of the work are appropriately investigated and resolved. The study was approved by Ethics Committee of Chengdu Women’s and Children’s Central Hospital [No. 2019(37)].