Retroperitoneal malignant triton tumor in an infant: a case report and literature review

As an uncommon form of malignant peripheral nerve sheath tumor (MPNST), malignant triton tumors (MTTs) are differentiated by the presence of malignant rhabdomyosarcoma. They are most frequently encountered in patients with neurofibromatosis 1 (NF-1). This malignant subtype of schwannoma usually presents in younger people and affects males and females equally (1). The common sites of MTT are the head, neck, extremities, and trunk (1), although they are occasionally found in the buttock, viscera, retroperitoneum, and mediastinum. These cases are uncommon in pediatrics. To our knowledge, there have been only 33 reported cases to date (2-12). Here we present the case of an 8-month-old baby girl with a huge abdominal mass and review the histopathologic, cytogenic, treatment response, and prognostic findings of this rare case of MTT.

The patient was an 8-month-old baby girl who was admitted to hospital after an abdominal mass was found two days before. A physical examination revealed abdominal distension. A solid mass measuring approximately 10 cm × 11 cm × 8 cm was palpated, and no tenderness was observed. Laboratory tests showed white blood cell count (WBC) was 18.8×109/L, hemoglobin (HGB) was 78 g/L, and alpha-fetoprotein (AFP) was slightly positive. Ultrasound examination revealed a low echo-level space-occupying mass in the abdominal cavity. T1-weighted magnetic resonance imaging (MRI) indicated a huge hypo-intense tumor in the laparo-pelvic cavity. MRI showed the mass to be irregularly enhanced after an injection of gadolinium-diethylenetriamine pent acetic acid (Gd-DTPA). T2-weighted imaging (T2WI) revealed the tumor to be hyper-intense and inhomogeneous (Figure 1A,B,C). There was no significant perinatal or family history. On the basis of these findings, the proposed treatment was surgical resection. During the operation, a huge tumor with a remote hemorrhage in the abdominal cavity could be seen. It was a pedunculated tumor and came from the left iliac fossa in the retroperitoneal space, displacing the urinary bladder inferiorly. Since the left ovary and uterus were closely related to the tumor, they were also resected together with the tumor. 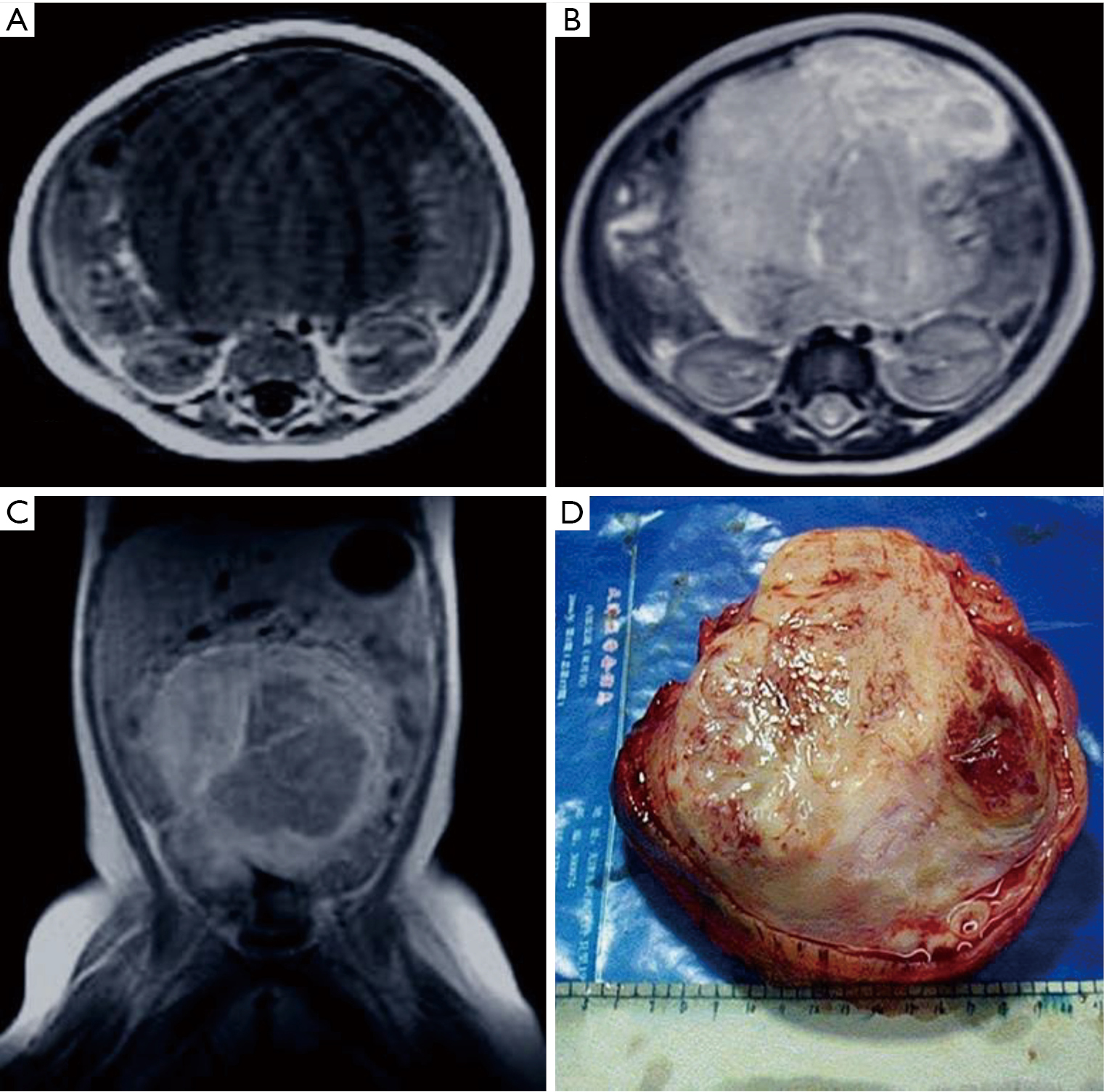 On gross examination, the tumor was ovoid and gray, measuring approximately 14 cm × 12 cm × 9 cm. Its surface was smooth, and there was no obvious capsule. The cut surface showed a gray, solid, tough, weave-like mass, which was semitransparent in focal areas (Figure 1D). Microscopically, the tumor was composed of spindled cells and rhabdomyoblasts. The polygon rhabdomyoblasts had abundant cytoplasm, hyperchromatic nuclei with prominent nucleoli, and pathological mitotic figures.

Immunohistochemical staining was carried out to determine the origin of the cells and showed a positive reaction to neurofibroma (NF). The spindled cells and rhabdomyoblasts reacted with S-100 protein and desmin, respectively, and negatively reacted to actin (Figure 2A,B,C). The diagnosis of MTT was confirmed. 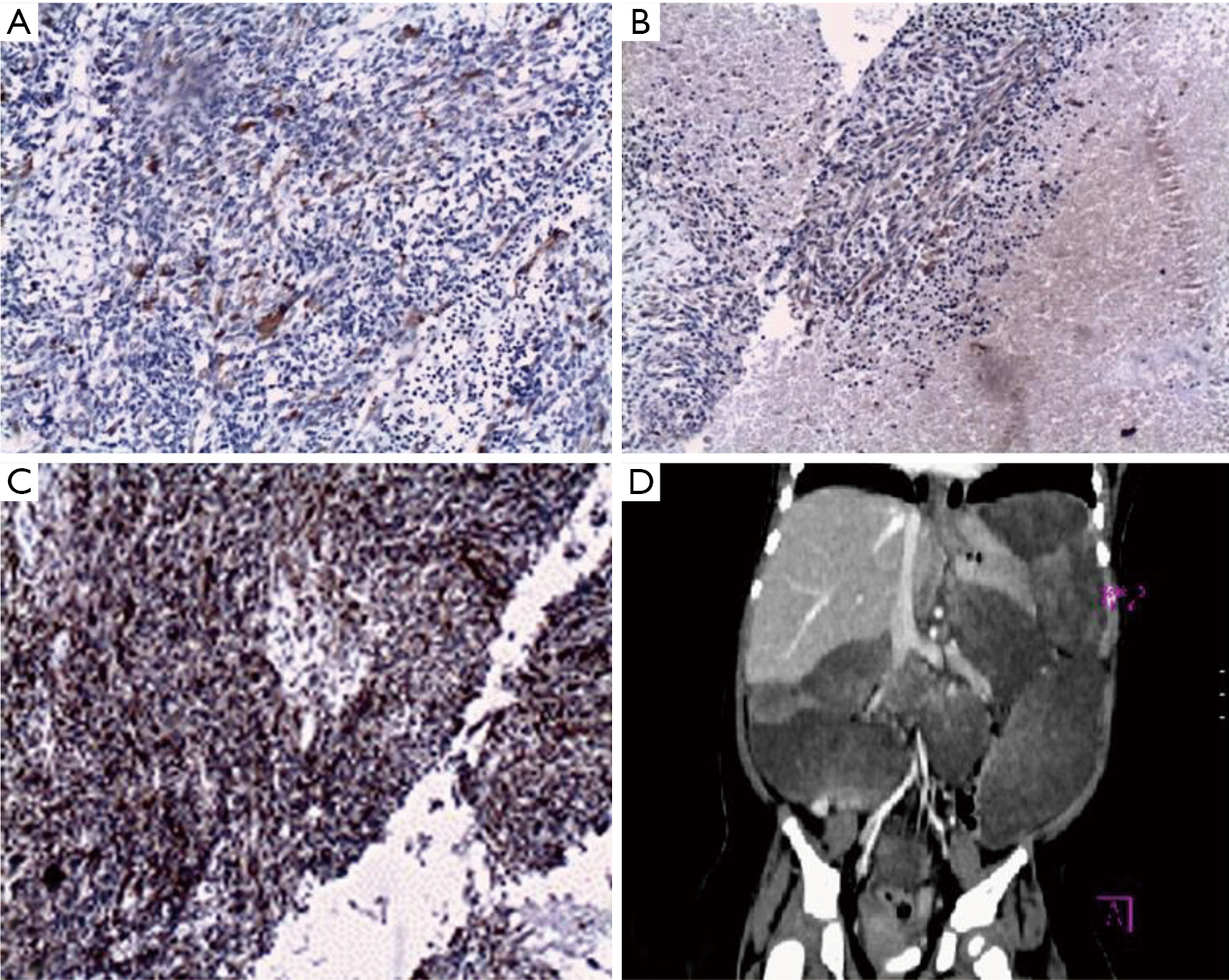 Two months after discharge, the patient was readmitted because of abdominal distention and diarrhea which lasted two weeks. Enhanced CT showed multiple low-density solid masses in the laparo-pelvic cavity, with uneven enhancement (Figure 2D). Recurrence and metastasis after surgery of retroperitoneal MTT were found to have occurred. Further therapy was refused by the patient’s parents. The patient died 20 days later, 5 hours after being readmitted to her local hospital for shock. An autopsy was not permitted.

First reported by Masson (13) in 1932, MTTs acquired their name based on the work carried out by Locatelli on the “Triton” salamander (genus Triturus) (14). Locally transplanted the sciatic nerve onto the dorsal surface of a salamander, inducing neural and muscular components to grow and ultimately produce a supernumerary limb. Through this, a close relationship was shown to exist between these two tissues. The term ‘triton tumor’ was first used by Woodruff (15) in 1973 and histopathologic diagnostic criteria were established.

Woodruff suggested that malignant Schwann cells transform into striated muscle cells (15), resulting in the rhabdomyoblastic differentiation seen in MTTs, and direct evidence has since been shown to support this (16). However, Holimon and other scholars (17,18), bringing the embryogenesis and histogenesis of ectomesenchyme together, put forward the idea that both cellular components derived from neural crest cells. The neural crest is a unique group of embryonic cells which exists exclusively in vertebrates and is able to evolve a wide variety of cell types all over the body during embryonic life. These various types, including the mesenchymal and cartilage which make up the facial skeleton to neuronal cell constitute the peripheral sensory and autonomic nervous systems, also melanocyte and smooth muscle in the heart’s major arteries. Some presumably retain stem cell characteristics into maturity (19). Tumors comprising mixed neural crest derivatives have also been reported, further highlighting the capacity of neural crest cells to differentiate in multiple ways (20,21).

Although the etiology of MTT is unknown, 69% of cases are linked to Von Recklinghausen’s Neurofibromatosis and it is predominantly male and younger people who are affected. The incidence of MTT is in sharp contrast with sporadic cases of the disease, as these occur more frequently in older females (1).

CT or Magnetic Resonance Imaging (MRI) may prove useful for ascertaining a tumor’s location, size, and margin, and for assessing metastasis and response to therapy. However, MTT has no characteristic manifestation on CT or MRI. Spindle cells and rhabdomyoblasts are the typical markers in histopathological examination. Immunohistochemical staining is necessary as this helps to prove the origin of the cells.

Radical tumor excision, which is one of the recommended treatments for MTT, consists of radical tumor excision and removes as much of the wider normal tissue margin as possible. High-dose radiotherapy might prevent local recurrence and extend survival (1). The efficacy of neoadjuvant therapy and adjuvant chemotherapy has not yet been determined (26-29,31).

MTT has a poor prognosis, with a high rate of local recurrence [almost 100% in incompletely excised cases (1)] and a low survival rate less than 26% after five years (1,33,34)]. The location, grade and integrity of surgical procedures may have an influence on prognosis. MTT has a more favorable outcome when it is located in the head, neck or extremities compared with other sites including the retroperitoneum (28). Recurrence occurred for the patient in our study only two months after discharge, which is slightly longer than another reported retroperitoneal MTT (35). One study noted that NF-1-associated MTT has a poorer prognosis than sporadic forms (15-18,20). However, MTT patients’ poor survival rate cannot be entirely explained by tumor location and the association with neurofibromatosis. The high rate of histologic Grade 3 cases in MTT can better explain it aggression, as this sees a higher capacity for proliferation and increases the risk early metastases (1).

In conclusion, MTT is an aggressive and rare form of tumor with a grim prognosis, especially when it occurs the retroperitoneum of an infant. Radical tumor excision combined with radiotherapy or adjuvant or neoadjuvant chemotherapy is the recommended treatment.

Conflicts of Interest: All authors have completed the ICMJE uniform disclosure form (available at http://dx.doi.org/10.21037/tp.2020.03.12). The authors have no conflicts of interest to declare.

Ethical Statement: The authors are accountable for all aspects of the work in ensuring that questions related to the accuracy or integrity of any part of the work are appropriately investigated and resolved. All procedures performed in studies involving human participants were in accordance with the Declaration of Helsinki (as revised in 2013). All of the imaging examinations were agreed by the parents. Written informed consent was obtained from the patient’s parents for publication of this study and any accompanying images. A copy of the written consent is available for review by the Editor-in-Chief of this journal.