Fecal microbiota transplantation (FMT) is a type of procedure which re-establish microbiome stability through transferring gut microbiota from a healthy donor and now utilized as the treatment for a number of diseases (1). It has been shown to be effective in treating relapsing Clostridium difficile infection (CDI), and possibly inflammatory bowel disease (IBD) (2). Many studies have shown that gut microbiota may play a role in some aspects of the metabolic syndrome, interact with host metabolism (3), which results in significant both local and systemic consequences.

The protocols regarding donor selection and recipient enrollment vary among different institutions. Donors with gastrointestinal diseases, metabolic syndrome, autoimmune diseases or allergic diseases are excluded given the important role of microbiome in systemic energy metabolism and immunological modulation. The recipients are monitored closely postoperatively because disruption of these bacterial species can result in potentially harmful metabolic alterations, increased intestinal permeability of toxic substances across the gastrointestinal mucosa.

Previous studies described that gut microbiota composition can predict metabolic status. The host metabolism was reported to be affected by the production of signaling molecules from gut microbes. This can affect gut integrity, the immune system and may impact host metabolic phenotype. Limited data suggests that FMT possibly induces undesirable outcomes, including increased risk of microbiota- associated disease such as new-onset obesity. The first record of sudden weight gain following FMT was an incidental finding after resolution of recurrent CDI, and another cohort was reported to develop obesity after transplantation of obese donor material (3,4).

In our present study, we investigated the alteration of FMT recipients with either CDI, or ulcerative colitis from healthy donor material. This helps us to understand how host metabolism will be affected by the manipulation of gut microbiota.

Eight patients with CDI and 12 patients with ulcerative colitis were included in our randomized placebo- controlled pilot study. The patients were divided into Placebo and FMT groups depending on whether FMT was requested by parents. The patients in FMT groups received FMT respectively, while Placebo group received vehicle treatment like normal saline. The age, gender and body mass index (BMI) prior to colonoscopy of all patients was described in the Table 1. All the patients underwent colonoscopy and received either no treatment or FMT. All the patients tolerated procedure very well without complications. The medications and diet for each patient were not significantly changed before and after colonoscopy. All patients were followed up at gastroenterology clinic routinely. The number and percentile of BMI in all the patients were recorded at different time points after FMT, including pre-transplantation, 1, 3, 6, and 12 months after FMT (Table 2). The change of BMI percentile compared to pre-transplantation was calculated. 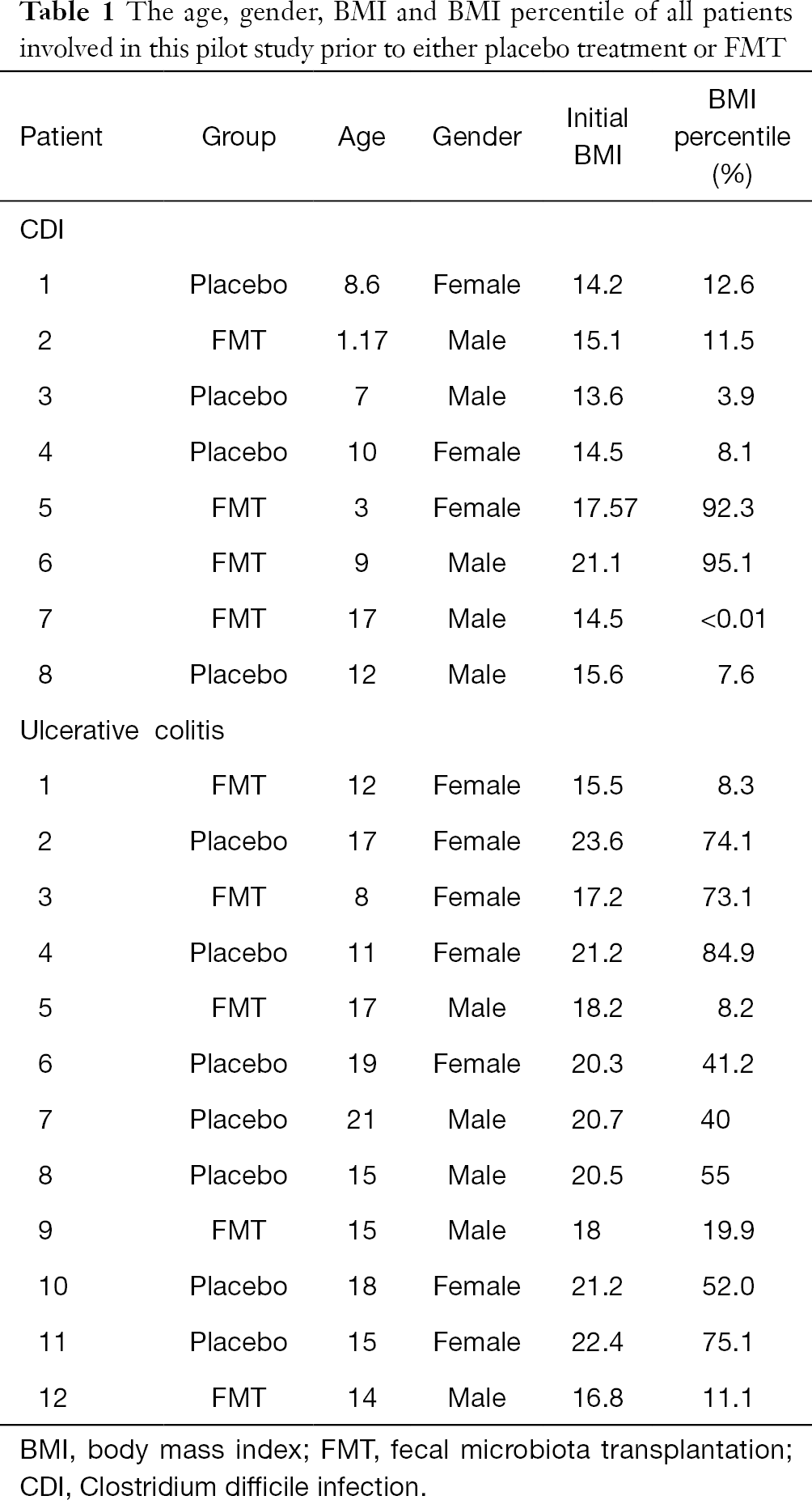 Table 1 The age, gender, BMI and BMI percentile of all patients involved in this pilot study prior to either placebo treatment or FMT
Full table 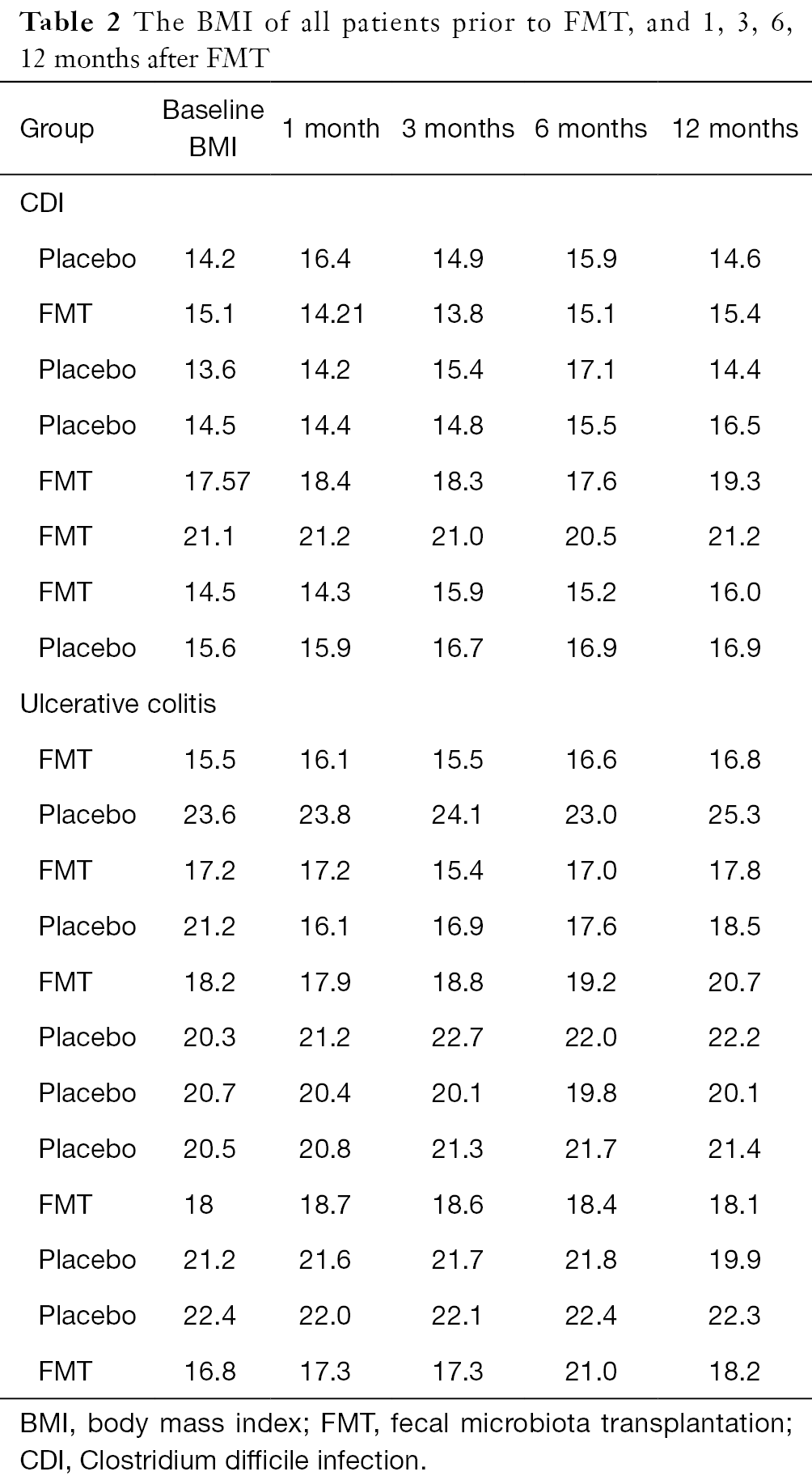 The research protocol was approved by the Institutional Review Board at Miller Children’s Hospital. The electronic medical record of each patient was reviewed to collect patient demographics, vital signs and clinical data from encounter notes.

FMT normalizes the composition and functionality of gut microbiota. It has now become a highly successful rescue therapy for recurrent CDI and attempted as the potential treatment for UC or other diseases. One of the common questions we are facing from the parents is: “Is my child’s weight going to be dramatically changed after fecal transplant?” Our pilot study successfully concluded that FMT from healthy donor material does not significantly alter the BMI of patients with CDI or ulcerative colitis, providing guidance on how to address this challenge during clinical practice. To our knowledge, we are among the groups firstly investigating the change of BMI after FMT in CDI or ulcerative colitis.

The potential role of gut microbiota in body size, energy expenditure has long been acknowledged. Pediatric patients with recurrent CDI demonstrate loss of gut microbiota diversity, which lead to significant dysbiosis with complete disappearance of Bacteroides, marked reduction of Firmicutes and massive increase of Proteobacteria. FMT materials used in our study was separated from stool of carefully selected donors, quantified in terms of viable bacteria, cryopreserved and banked. Previous reports showed colonoscopic administration of FMT induced prompt normalization of microbiota community structure as early as 24 hours after the procedure that closely resembles the composition in donors (5), however limited investigations suggested that donor-like microbiota composition could persist in these patients for months and even years.

The increased recognition of gut microbiota has generated the theory that FMT could be a new beneficial therapy for a variety of diseases involving body metabolism, autoimmunity and nervous system function. Several studies on obese patients reported that FMT from healthy lean human donors results in improvement of body weight and insulin resistance in the recipients (6). The underlying mechanisms that mediate the effects of FMT include improving gut permeability and endoplasmic reticulum stress, promptly restoring the metabolism and composition of secondary bile acid. Optimal protocols for FMT in variable diseases need to be developed cautiously (7), because of endogenous and exogenous factors that influence the gut microbiota, including host genetic features and immune response. Having said that, in our study, no significant change of BMI of the FMT recipients with either CDI or ulcerative colitis suggests FMT materials from healthy donor will less likely induce metabolic syndrome.

FMT was found to increase bacterial diversity, and shift microbiome composition shifts towards the healthy donor (8). It was reported that in childhood, the composition of gut microbiota becomes more stable with multiple members of Bacteroides, including those with butyrate-producing capacity. Additionally, in a case series of pediatric patients increased microbiome diversity after FMT for CDI appears to be sustained in those without IBD, however at 6 months decreases to pre-FMT baseline in those with IBD, suggesting long term modification of fecal microbiome diversity depends on host- related mechanisms. Association studies in humans have shown disease-related dysbiosis across a wide spectrum of common chronic disorders (9,10). This supports the notion that microbiota- associated phenotypes may be transferred and reproduced at least to some extent in as genetically susceptible recipient. This growing challenge is anticipated to be the focus of next generation of FMT-based therapeutics.

Although the studies of FMT on IBD in children are still limited, the procedures appear to be safe, tolerable and does not induce significant alteration of BMI based on our current study. This encourages us not to hesitate to proceed multiple, and more frequent FMT on IBD patient if necessary. Our pilot study is able to conclude that FMT from healthy donors does not significantly alter BMI in children with CDI or ulcerative colitis over 12 months. The limitation of our study is less volume of sample size. Future research will focus on enhancing the study by increasing the cohort size, and minimizing the effects of confounding variables including the medications or the severity of disease.

Ethical Statement: The authors are accountable for all aspects of the work in ensuring that questions related to the accuracy or integrity of any part of the work are appropriately investigated and resolved. The research protocol was approved by the Institutional Review Board at Miller Children’s Hospital (MHS093-12). The electronic medical record of each patient was reviewed to collect patient demographics, vital signs and clinical data from encounter notes.