The American Cancer Society estimates that in 2019, there will be over 1.7 million new cases of cancer in the United States, of which nearly 16,000 are among pediatric patients with leukemia being most common (1). Since the 1970s, the incidence of childhood cancer has increased by 0.6% per year, though the mortality rate has decreased from 6.3 per 100,000 in 1970 to 2.2 per 100,000 in 2016 (1). The overall 5-year survival rate for childhood cancer is greater than 80%, yielding approximately 450,000 survivors (2,3). Therapies for childhood cancer include chemotherapy, radiation, targeted therapy, immunotherapy, and surgery. Complications, such as anthracycline-induced cardiomyopathy and resulting heart failure have been well described, and cardiovascular disease is the leading cause of non-cancer morbidity in cancer survivors (3). Cardiac-related mortality in cancer survivors has decreased in association with the utilization of more contemporary heart failure therapies, but despite this improvement the incidence of severe heart failure in this population has increased (4). As such, there is a population of patients, pediatric and adult, who will develop end-stage heart failure refractory to therapy and who warrant consideration for heart transplantation as a result of cancer-therapy related cardiotoxicity (CTRC). Herein, we briefly provide background on CTRC, and review current data regarding transplantation in survivors of childhood cancer. 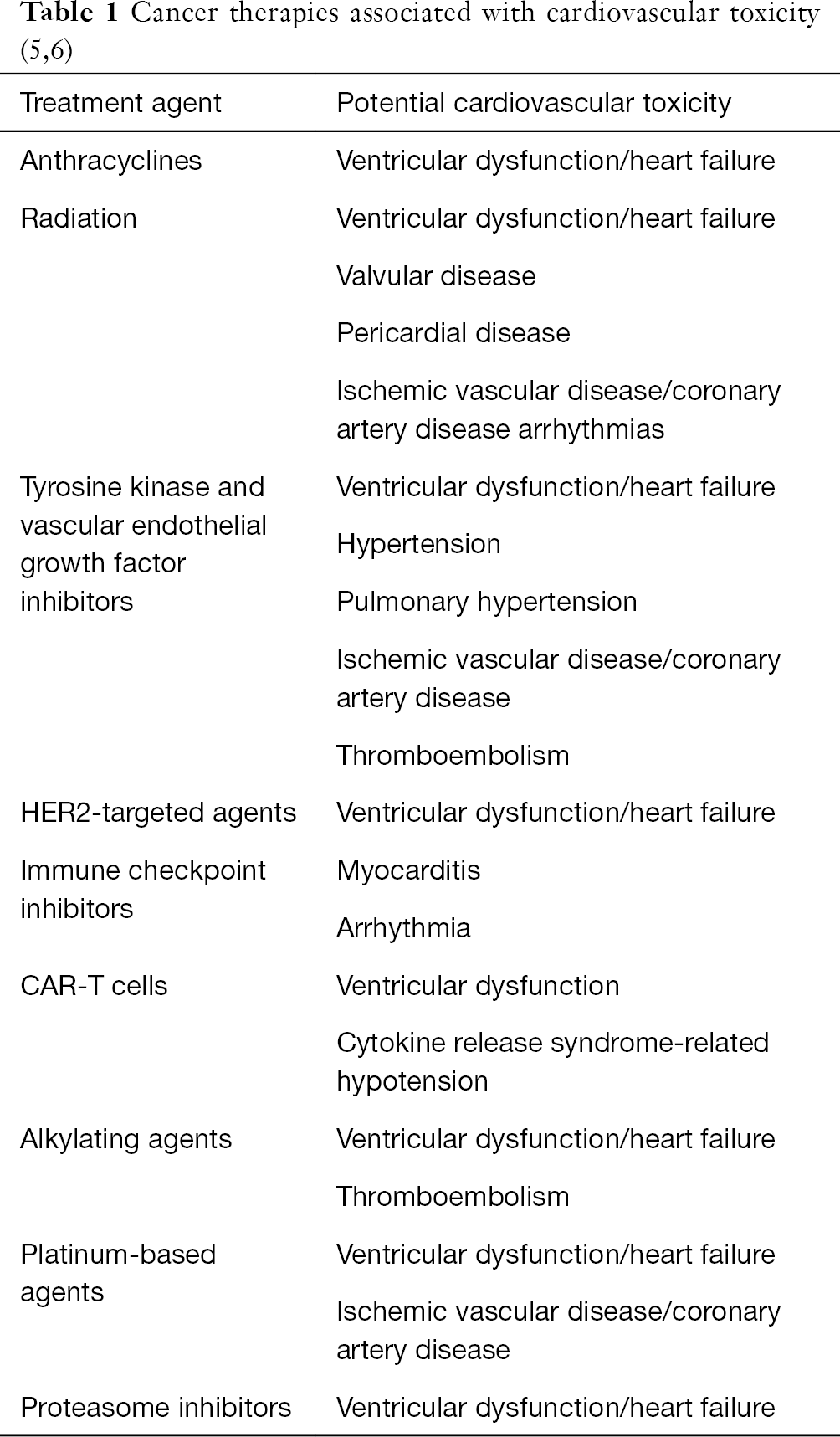 Anthracyclines, such as doxorubicin, have been reported as the leading cause of cardiac complications in patients after cancer treatment. There is an incrementally increased risk of heart failure with higher cumulative anthracycline dose, and this risk persists beyond 45 years after treatment (3). In addition to high cumulative dose, a high single dose, underlying cardiac disease, mediastinal radiation, and younger age at treatment have been described as risk factors for development of cardiotoxicity (7). Reports vary regarding the exact cumulative anthracycline dose associated with cardiotoxicity, and has been reported as 250–500 mg/m2 in the literature (3,7). Over 50% of patients with anthracycline exposure have been reported to have some cardiac abnormalities on echocardiogram or gated nuclear angiography by 20 years after diagnosis (8). Even in those who do not develop symptoms of heart failure, abnormalities such as decreased left ventricular contractility, decreased left ventricular mass, and decreased wall thickness have been described (3). Among those who are affected, acute toxicity is defined as that occurring anytime within one week following administration of anthracycline based therapy, early-onset toxicity occurs after the first week but within 1 year post therapy, and late-onset toxicity is defined by presentation later than 1 year after therapy (3).

Targeted cancer therapies, including tyrosine kinase inhibitors, vascular endothelial growth factor inhibitors, platelet derived growth factor inhibitors, and human epidermal growth factor-2 targeted therapies are demonstrated to have potential for CTRC (6). Tyrosine kinase inhibitors, e.g., sorafenib and imatinib, are used to target specific pathways within neoplastic tissue, particularly those affected by upregulated kinase enzymes (9). However, these medications also affect other kinase pathways, such as those in the myocardium, which can lead to left ventricular dysfunction. Prior studies looking at electron micrographs in adults who received therapy with imatinib have demonstrated abnormal myocytes, pleomorphic mitochondria with effaced cristae, vacuoles, and glycogen accumulation, among other changes (9). Clinically, this can lead to ventricular dysfunction, hypertension, pulmonary hypertension, and thromboembolism (6).

Radiation therapy can lead to tissue damage and fibrosis, as well as vascular injury. Fibrosis is caused by an increase in the total collagen deposition and increased proportion of type I collagen compared to type III, which alters myocardial compliance and leads to diastolic dysfunction(9). Chest radiotherapy with doses over 35 Gy, or over 15 Gy when in combination with anthracycline use, has been described as increasing the risk for development of cardiomyopathy (7). Patients who have received mediastinal radiation therapy during cancer treatment are at increased risk to develop cardiomyopathy, valvar dysfunction, constrictive pericarditis, and coronary artery disease. Transplantation becomes an option for these patients if they develop symptomatic heart failure or when pericardial and mediastinal adhesions are extensive, limiting the ability to perform necessary valvar or coronary artery bypass graft surgery (10).

CAR-T cells target CD 19 cells, stimulating T cell proliferation, and leading to cytolysis and release of inflammatory cytokines. This can result in a systemic inflammatory response, also called cytokine release syndrome (11,12). A recent single center study looking at the cardiac profile of CAR-T cells showed approximately 25% of patients developed hypotension requiring inotropic support, of which 40% had systolic dysfunction by echocardiogram (10% of total patients in the study). By hospital discharge, a total of 7% of patients had either persistent cardiac dysfunction, or new cardiac dysfunction by echocardiography (12). Long-term effects are not yet known.

Medications to both prevent and reverse cardiotoxicity are used in the care of patients with childhood and adult cancers. Dexrazoxane has been used off label for decades in children and adolescents with leukemia undergoing therapy with anthracyclines to prevent development of cardiomyopathy (13,14). However, given some concern over its effect on therapies or development of secondary malignancy, it is not uniformly used. Medications to reverse cardiotoxic effects will be discussed below.

For survivors of childhood cancers, the Childhood Cancer Survivor Study has been a wealth of information regarding risk to develop CTRC. For development of heart failure specifically, important risk factors included female gender, age less than 10 years at diagnosis, treatment era, and higher doses of anthracycline and/or radiation (15). Using these data, an online risk calculator (https://ccss.stjude.org/tools-and-documents/calculators-and-other-tools/ccss-cardiovascular-risk-calculator.html), focused on anthracycline and radiation therapy, is available to predict risk of heart failure, ischemic heart disease, and stroke by age 50 in survivors of childhood cancer (16).

Guidelines are available for the imaging assessment of adult patients throughout cancer therapy (19). Both 3D LVEF and parameters of tissue deformation (myocardial strain and tissue Doppler) have demonstrated the ability to detect subclinical dysfunction in adult and pediatric studies (18,20,21). Despite this, the majority of current screening efforts in pediatric patients focus on shortening fraction and LVEF. In considering the guidance from various organizing bodies, the International Late Effects of Childhood Cancer Guideline Harmonization Group recommends echocardiography as the primary method of surveillance for assessment of left ventricular systolic function in patients previously treated with anthracyclines and/or chest radiation, to be initiated no later than 2 years after completion of therapy, and repeated a maximum of every 5 years. More frequent and lifelong surveillance can be considered in high risk survivors. It is also considered reasonable to use cardiac MRI for cardiomyopathy surveillance in at-risk survivors when echocardiography is technically suboptimal. In addition to imaging surveillance, this document also recommends that “assessment of cardiac blood biomarkers… in conjunction with imaging studies may be reasonable in instances where symptomatic cardiomyopathy is strongly suspected or in individuals who have borderline cardiac function during primary surveillance” (22).

Oral medications such as angiotensin converting enzyme inhibitors (ACE-I) (e.g., lisinopril, enalapril) or angiotensin receptor blockers (ARBs) (e.g., losartan) provide afterload reduction through inhibitory effects on the renin-angiotensin-aldosterone system. Both ACE-I/ARBs as well as aldosterone receptor antagonists (e.g., spironolactone, eplerenone) have myocardial remodeling effects (23,25). Beta blockers (e.g., carvedilol) are used when patients have symptomatic heart failure or asymptomatic heart failure with systemic LV dysfunction. Multiple studies in adults have demonstrated improvement and even normalization of LV systolic function in patients with chemotherapy-related cardiomyopathy who were treated with an ACE-I +/− beta blocker, with better results on dual therapy (26,27). There are limited data available in pediatric patients, however a clinical trial is currently enrolling to investigate the efficacy of beta blockers in preventing development of CTRC in survivors or pediatric cancers (28). Intravenous medications such as milrinone, epinephrine, dopamine, dobutamine and calcium may be used when oral therapies are insufficient.

Mechanical circulatory support is utilized when medical therapies are no longer adequate to support metabolic demand, and options range from extracorporeal membrane oxygenator support to ventricular assist devices (VAD). The type of VAD chosen for a patient varies based on patient size and institutional preference. A VAD can be considered as a bridge to recovery, bridge to eligibility or candidacy, bridge to transplantation, or as destination therapy (29). This may be particularly important in a patient who is still temporally close to cancer diagnosis or chemotherapy course and may not yet be appropriate for transplant consideration (see below). Multiple case reports and 2 small cohort studies have described use of left VAD as a bridge to recovery in adult patients with chemotherapy-induced cardiotoxicity (30-33). In both of the cohort studies, survival was similar to other cardiomyopathies, however in one, there was a higher need for subsequent right VAD support in the chemotherapy group (32). Data in pediatric patients are limited to a case report (34). With currently available techniques, a VAD may be explanted for myocardial function recovery, with ability for reinsertion if function should decline (35). This may be an appropriate strategy for patients with acute toxicity from chemotherapy that has a higher chance for recovery.

Eligibility for heart transplant in CTRC

Heart transplantation is considered only when other treatment options have been exhausted, and the patient’s current life expectancy is less than the median expected lifetime of a transplanted heart. Some of the first reports of transplantation for anthracycline-induced cardiomyopathy in pediatric patients date back to the early 1990s (36,37). According to the ISHLT 2016 guidelines for listing criteria for heart transplantation, in patients with a cancer diagnosis, eligibility for listing is dependent on a variety of factors such as type of neoplasm, response to provided therapies, and absence of metastases (29). There is no defined time period for observation between a diagnosis of remission and listing for heart transplant—rather evaluation and discussion between cardiologists and oncologists is necessary to determine eligibility and, if appropriate, optimal timing of listing. The majority of relapses for childhood cancer occur within 2 years after therapy is completed (38), thus defining a timeframe some centers currently use. Contraindications to transplant include active neoplasm, presence of metastases, ongoing therapy with either chemotherapy or radiation, active infection, and multisystem organ dysfunction.

After a heart transplant, the most critical period occurs in the first week, and requires intensive monitoring for bleeding, hemodynamic support, acute kidney injury in the setting of being on bypass, and with initiation of immunosuppressive medications. In patients who previously underwent radiotherapy, given the amount of mediastinal fibrosis and technical difficulties with the procedure, bleeding may be a significant concern.

For patients who underwent mediastinal radiotherapy during cancer treatment, a unique process that can contribute to morbidity and mortality at any point is respiratory failure secondary to radiation induced lung disease (10).

The frequency of treated rejection in the first year post-transplant has decreased over time. There is less reported rejection with the use of tacrolimus when compared to cyclosporine, regardless of whether the patient underwent induction therapy or no induction therapy (41). With respect to patients transplanted for anthracycline-induced cardiomyopathy, according to PHTS, the timing of the first episode of treated rejection and was similar in this group when compared to those transplanted for dilated cardiomyopathy (39).

The number of survivors of childhood cancer is increasing, and with this comes an increase in the number of patients developing cardiotoxicity as a result of cancer therapies. Attention should be placed on close surveillance of cardiac function, with early intervention with medical and advanced therapies when cardiac dysfunction or symptoms of heart failure develop. A portion of patients will have continued decline in function requiring heart transplantation. Complications and overall survival are similar for patients transplanted for anthracycline-induced cardiomyopathy compared to those with dilated cardiomyopathy, demonstrating that this is a viable treatment option for this population. As other cancer therapies become more common, new cardiovascular toxicities are recognized. Whether heart transplantation will be appropriate for all patients with CTRC will require demonstration of similarly good outcomes to ensure proper allocation of organs.