The incidence of inflammatory bowel disease (IBD), a collective term for Crohn’s disease (CD) and ulcerative colitis (UC), has been increasing over time and expanding to different regions around the world, indicating that IBD is a global disease. IBD is a polygenic disease thought to be triggered by environmental factors. IBD may represent dysregulated mucosal inflammation in response to gut microbiota. A Western or westernized lifestyle is thought to be a major driver of the growing incidence of IBD. Currently, however, the key environmental factor for IBD is unidentified.

It is imperative that we identify the ubiquitous environmental factor underlying IBD in order to provide suitable treatment. Findings from epidemiology studies have indicated that diets high in animal fat and low in fruits and vegetables are the most common pattern associated with an increased risk of IBD (1). We believe that westernized diet-associated gut dysbiosis is the most ubiquitous environmental factor in IBD (2). The next question then becomes what kind of diet is suitable for IBD as a replacement for a westernized diet. Due to a lack of evidence, the most suitable diet for IBD is unknown (1). This is a serious problem in current IBD practice. Patients are advised to eat a well-balanced diet, avoiding processed foods or foods that they self-identify as worsening their symptoms (1).

This commentary aims to provide a rationale for why we recommend a plant-based diet (PBD) for IBD. Here, we discuss regular diets.

Recently, research has shown that diet shapes gut microbiota, which is related to our health and morbidity (3-5). We have coevolved with gut microbiota to exist in a symbiotic relationship. Westernized diets (high in fat, animal protein and sugar, low in dietary fiber) decrease Firmicutes and increase Bacteroidetes at the phylum level: Bacteroides dominate at the species level. In contrast, PBD (low in fat, animal protein and sugar, high in dietary fiber) induce largely opposite changes. They increase Firmicutes and decrease Bacteroidetes: Prevotella species dominate.

Criteria for suitable diet in IBD

The following four criteria may be helpful for designing a suitable diet in IBD.

Rationale for designing the diet

The rationale for designing the diet should be based on the pathogenesis of IBD. Currently, dysbiosis of gut microbiota is found not only in IBD but also in other chronic diseases. The suitable diet will restore symbiosis of gut microbiota. Because UC and CD have similarities as well as differences in pathogenesis, phenotype, response to medication and so on, there might be some difference in the suitable diet between UC and CD.

Efficacy of the diet in IBD

IBD has two stages: active and quiescent stage. The treatment goal is induction of remission in the active stage and maintenance of remission in the quiescent stage. The epidemiology of IBD is similar in both CD and UC. This means that the suitable diet should be effective in both UC and CD. If the diet is suitable, the diet can be provided from the start of treatment even in the active stage with or without medication. The exception is the fulminant stage, when patients lose their appetite and do not want to eat. The induction rate and maintenance rate of remission with/without medication should be higher with the suitable diet than with a conventional diet.

Acceptability of the diet by patients

The suitable diet should be accepted by the majority of IBD patients. The patient or meal preparer should be able to prepare the diet, and patients should be able to eat the diet. For this purpose, the naming of the diet is important. The name of the diet should enable patients to easily imagine the content of the diet. For example, it would be difficult for the average person to imagine the content of a low fermentable oligo, di, monosaccharide and polymer (Low-FODMAP) diet.

World-wide application of the diet

IBD is a global disease. Therefore, the diet should be applicable worldwide.

In the literature, there are primitive reports of several diets for IBD: the specific carbohydrate diet, low-FODMAP diet, IgG4-guided exclusion diet, autoimmune protocol diet, an anti-inflammatory diet, and PBD (1). They are far from satisfying the above criteria, except for PBD. PBD is a plausible candidate for the suitable diet for IBD.

History and concept of PBD in IBD

It is natural that preventable diets for disease are recommended and risky diets are moderated. There will be a limitation to both mere addition of probiotics, prebiotics or foodstuffs and mere exclusion of potentially untoward food stuffs (1,7). We believe that not partial but comprehensive food control is needed for patients who are genetically predisposed to IBD. PBDs are listed as variations of USDA healthy eating patterns and recommended to the public to prevent common chronic diseases (10,11). PBDs are appropriate for all stages of the life cycle, including infancy, childhood, and adolescence (11).

Our PBD was described in detail previously (7). Fruits, vegetables, legumes, potatoes, and yoghurt are served daily. Sweets are not served. We developed a PBD scoring system for Japanese patients with IBD (9). The plant-based diet score (PBDS) evaluates adherence to PBD. Eight items considered to be preventive factors for IBD (vegetables, fruits, pulses, potatoes, rice, miso soup, green tea, and plain yogurt) contribute to a positive score (PBDS+), while eight items considered to be IBD risk factors (meat, minced or processed meat, cheese/butter/margarine, sweets, soft drinks, alcohol, bread, and fish) contribute to a negative score (PBDS−). Scores of 5, 3, and 1 are given according to the frequency of consumption: every day, 3–5 times/week, and 1–2 times/week, respectively. The PBDS is calculated as the sum of the positive and negative scores, and it ranges between −40 to +40. A higher PBDS indicates greater adherence to the PBD (9). The PBD and PBDS can be modified for a variety of diseases and for different national dietary preferences (9). No food item was prohibited (7).

PBD normalize bowel movements in constipated patients and induce normal stool in patients with diarrhea/loose stool. Normal bowel habit may indicate symbiosis of gut microbiota. This symbiosis will suppress onset of relapse. It is much like precautions against fire: suppression of ignition (Figure 1). 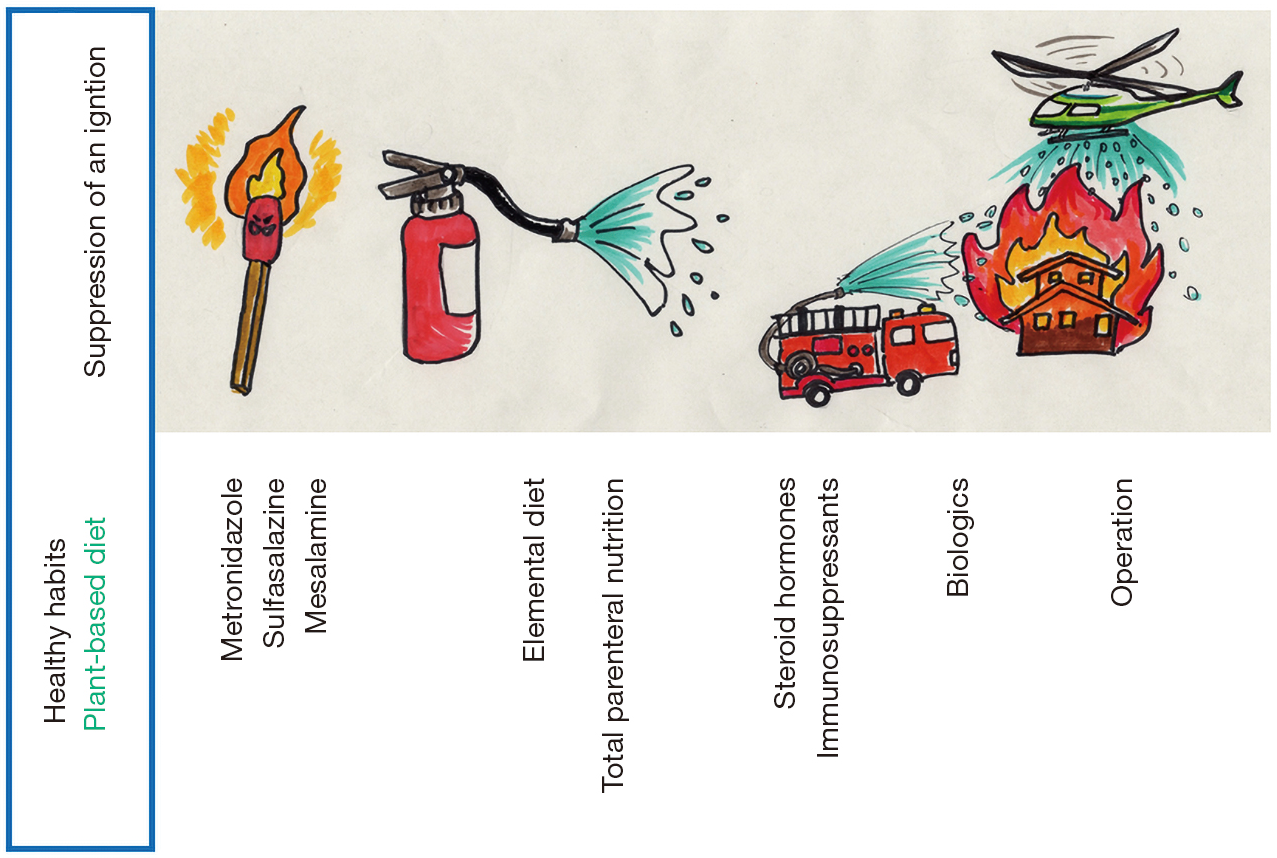 Our loose PBD, a lacto-ovo-semi-vegetarian diet allowing fish once a week and meat every other week, does not result in micronutrient deficiency. Those following a strict PBD, i.e., vegans, however, must take adequate vitamin B12 and vitamin D supplements, and must ensure proper calcium and iron intake (11).

Induction and maintenance of remission by therapy incorporating PBD

We have 15 years of experience treating more than 159 UC patients and 70 CD patients (9). This includes 15 UC patients from 11 to 18 years old and 16 CD patients from 13 to 18 years old (9). Our cases, even mild cases, were treated on an inpatient basis (12). In most of the patients, there was no hesitation about admission because they were aware of the abnormality and wanted to be treated. PBD was served after admission.

In CD, infliximab combined with PBD induced remission at a rate of 96% in 46 consecutive cases (13). This remission rate is excellent considering that around 30% of sufferers are primary non-responders to infliximab (14) (Figure 2A). PBD is effective in the maintenance of remission in CD: 100% and 90% at 1- and 2-year follow-up, respectively (7) (Figure 2B). This remission rate was achieved without scheduled maintenance therapy of infliximab or adalimumab. The relapse rate of initial episode patients with UC who were treated with therapy incorporating PBD was 14% at 1 year (15). It was 4% for educationally hospitalized patients (12) (Figure 2C). We now treat mild cases of UC with PBD first, not medication (12,15-17). PBD without medication can induce remission in about one-third of patients with mild UC (15). All patients ate the PBD, and none experienced an adverse effect (7,15). The rate of adherence to PBD during follow-up was 73% (7). Significant adherence to PBD determined by PBDS relative to baseline was maintained even 6 years later (15). Although admitting that therapeutic modalities are different, to our knowledge, these results are the best among those reported in the literature (Figure 2).

We believe the incorporation of PBD in therapy contributed most to our achievement. In our practice, hospitalization plays a critical role in replacement of an omnivorous diet with PBD. It is obvious that the majority of diseases we face are chronic diseases (lifestyle diseases) due to an unhealthy lifestyle (18). Therefore, incorporation of a healthy lifestyle in medicine, namely lifestyle medicine, is fundamental for prevention and treatment of chronic diseases. Changes in lifestyle including dietary habits are not easy. Hospitalization helps limit risk factors for IBD and our health such as smoking, alcohol, sweets, and animal foods, while patients benefit from preventive factors every day such as intake of vegetables and fruits (14,15). Hospitalization seemed to enhance their self-management skills, which contributed greatly to prevention of relapse (12,15).

Limitation of PBD in IBD

The precise mechanisms underlying how diet induces microbial dysbiosis and results in onset of individual chronic diseases are not yet fully understood. Gut microbiota is constituted of not only bacteria but also viruses and fungi. New critical information relating to the pathogenesis of IBD might emerge from future investigations of microbiota rather than bacteria.

The evidence level of our clinical observations without a control diet is low as compared with a conventional randomized controlled trial. Larger controlled studies are needed to validate our results. Considering the difficulty of such a dietary intervention trial, however, it might take another decade to obtain convincing evidence on a suitable diet for IBD.

Based on the rationale of the diet, gut microbiota, and health consequences and excellent outcomes with therapy incorporating PBD, PBD is unreservedly recommended for IBD.