John C. Carey, MD, MPH, is Professor and formerly Vice Chair of Academic Affairs, Department of Pediatrics, at the University of Utah. Throughout his career, Dr. Carey has been interested in birth defect syndromes and the care of children with these conditions. Dr. Carey graduated from Villanova University in 1968 with an A.B. and obtained his MD from Georgetown University School of Medicine in 1972. He trained in pediatrics, and genetics and dysmorphology as a resident and fellow at the University of California San Francisco, 1972–1979.

Dr. Carey obtained an MPH from the University of California at Berkeley in 1976 in between his residency and fellowship years. Dr. Carey joined the faculty at University of Utah Health Sciences Center in 1979. He became Chief of the Division of Medical Genetics in 1985 and remained in that leadership position until 1999 when he stepped down to assume the role as Editor-in-Chief of the American Journal of Medical Genetics. He held that editorial position 2001–2016 and in 2017 became Emeritus Editor in chief and Associate Editor of the Journal. Dr. Carey established the Medical Genetics Fellowship Program at the University of Utah and just recently stepped down as Program Director. He continues to teach and mentor residents and fellows in the training program.

Dr. Carey’s research focus has been in congenital malformations, neurofibromatosis, and syndrome delineation. He has authored or co-authored over 300 papers, chapters, invited articles and editorials for scientific journals. He also co-authored the textbook, “Medical Genetics” by Jorde, Carey, & Bamshad, now in its 5th edition. The book is a widely used text in schools of medicine throughout North America, South America, and Europe.

Dr. Carey has served as medical adviser and “founding professional” for the Support Organization for Trisomy 18, 13 and Related Disorders (SOFT) since 1980. The medical and ethical aspects of care of infants and children with these conditions are currently some of his major academic interests.

We were honoured to have sat down for an interview with Prof. Carey as he talked to us about using facial features to diagnose syndromes to do with disabilities or birth defects, smoking and its risk in clefts, as well as a life-changing event during his training that led him to where he is today (Figure 1). 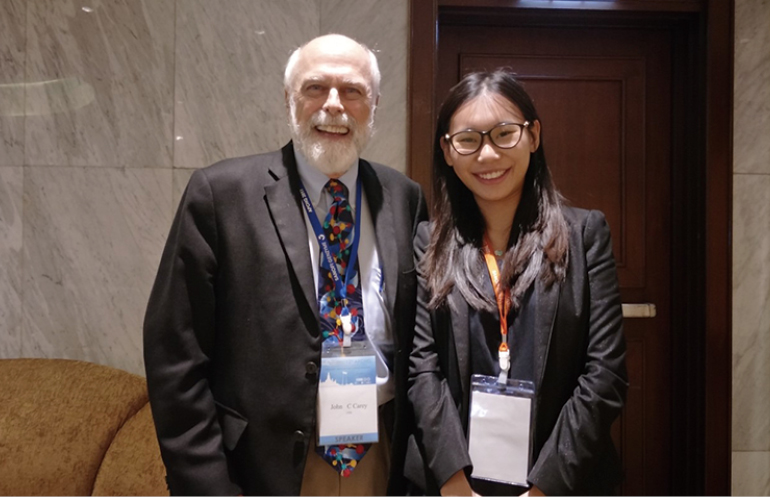 TP: As a distinguished invited speaker for the APGHC 2017, you gave us an excellent presentation on “Facial feature and diagnosis” and one on “the causes and mechanism of orofacial clefts”, which were well received by the audiences. Would you like to summarize some main points to share with us?

Dr. Carey: The presentation on the art and science of facial features in diagnosis was designed to teach primarily the junior people who are in training here on precisely how to look at the face of a patient when they are considering a syndrome with disabilities or birth defects. It is often the face that will tip one off to the primary diagnosis. This skill is not something that is taught very readily to medical students or residents in fields, and my goal was to bring some standardization to the people in the audience about what descriptive words they use, how they describe the features, and how they would approach the examination before even thinking about what the diagnosis might be. Of course, I also meant to highlight the project that I participated in, the “The Elements of Morphology”, designed to provide a dictionary and definitions on the commonly-used phenotypic variations, in this case, of the face.

TP: In your presentation, you have mentioned several approaches that can be used to measure facial features. What do you think are the advantages of these techniques? What are their limitations?

Dr. Carey: The reason I mentioned measurement and brought out my ruler for the audience is because if a feature is objectively long or short, that is, above or below a certain measurement percentile; I think you can put more weight on it as a clue to diagnosis. If something is just subjectively thought to be larger or smaller, I don’t think you can be as objective (or scientific really) about it. I was trying to emphasize how we should strive to be as objective as possible when determining these features as clues to diagnosis.

TP: What do you think is the future direction of studying smoking and orofacial clefts? What kind of insight will the study give us?

Dr. Carey: For many years, I didn’t believe that cigarette smoking was a risk factor for clefts, because some studies showed slight increased risk for one type of cleft, others for another type of cleft, others were negative. But after 20 years of various approaches, when you put the many studies all together, it became convincing that cigarette smoking by the mother during pregnancy increased the occurrence of a cleft by about 30%. Now that percent increase actually is fairly small because the absolute risk is quite small; but other studies have shown that cigarette smoking, along with certain genetic variants known to be related to metabolizing nicotine combined, can increase the relative risk up to 20 times not just 1.3 relative risk, the 30% mentioned, but over 900%. This combination demonstrates that this is likely a gene-environment interaction that increases the chance of a baby having a cleft. It’s almost like we have this predisposition or liability to a number of factors, and so the combination of these one or two genes and smoking together cause it to occur.

While we should always be encouraging people to stop smoking for overall health, especially women in pregnancy (because there are risks other than clefts), it really makes the case that since we can prevent spina bifida with folic acid taken during early gestation, we can decrease the occurrence of clefts—which are a common birth defect—if we stamp out smoking in pregnancy.

TP: As we know, you are an excellent researcher in the field. Would you like to share with us any stories behind your work? What encouraged you to choose this field and career?

Dr. Carey: My most important story relates to when I was training in pediatrics 44 years ago, in 1973. I had to go to the family of a newly born baby with Down syndrome and tell the parents the news. The experience of giving this difficult and unexpected news was transformative for me, and it made me realize that the theme of genetic conditions and the plight of families having to cope with them was something that I wanted to help with. It also attracted me to the importance of communication with patients, in this case, communicating the unexpected news that their baby, who was just born, had Down syndrome. So that was a defining moment for me, and I even wrote a paper for a medical journal where I described that story. While I had started off with pediatrics, the experience led me to genetics and the study of birth defects. I think when you’re young and learning to be a doctor, you think that you’re always there to help people, but there I was, in a position to give what they perceived to be “bad news” and I realized that no one had taught me about this scenario. I determined that I was going to have to watch other doctors, focusing on learning how to do this in the best way possible. I think this experience has been an important milestone in my career, which is why outside of the medical scope, I’ve gone on to do a lot of work with support groups for families of children who have birth defects that help families cope with these situations. I think that the partnership with support groups is an important aspect of medicine that didn’t exist 30 years ago. The Internet has of course changed it even more—it has made it more accessible for example for someone here in Thailand to connect—let’s say—with someone in Canada or America whose child has the same rare condition. The connecting of families having to cope with these challenges, the lessening of the isolation—that’s the theme.