Renal abscesses are rare in children, especially those without pre-existing anatomical abnormalities of the renal system (1-7). Typical symptoms of a renal abscess include fever, abdominal pain and nausea or vomiting. Escherichia coli is the most etiological bacteria, which is found in the urine in less than half of the cases and even less frequently in the blood (1,8). Diagnosis is typically based on high suspicion of the diagnosis and confirmed by renal ultrasound, and computed tomography of (CT) abdomen (3,8,9). Treatment in most cases consists of intravenous antibiotics; in a small percentage of cases, a CT guided percutaneous drainage is indicated, especially for larger abscesses. We present a case of renal abscess in an otherwise healthy adolescent with no pre-existing renal anomaly.

A previously-healthy, 14-year-old male presented to the emergency department with a 2-day history of fever up to 102 °F, nausea, non-bloody, non-bilious vomiting and 1-day history of peri-umbilical pain that radiated to the right upper and lower quadrants of the abdomen. Pain extended to the right flank and was aggravated by movement and deep inspiration. He also had a 1-day history of decreased urine output and amber-colored urine, associated with decreased oral intake. He denied dysuria, hematuria, or rash. He had an upper respiratory infection 2 weeks prior, which had since resolved. His last bowel movement was 2 days prior. Medical history included bilateral hernia surgery in young childhood. He is doing well in school and is an avid soccer player. Findings on a review of systems and rest of the history were unremarkable.

Evaluation in the emergency department indicated acute kidney injury with blood urea nitrogen/creatinine ratio: 25. Patient was given boluses of intravenous (IV) normal saline. He was admitted to the pediatric inpatient unit for immediate management of acute kidney injury and further evaluation. Chest X-ray showed normal findings. On day 3 of illness, he showed clinical improvement. A repeat abdominal ultrasound showed 4 cm mass in the upper pole of the right kidney, most likely consistent with a subacute hematoma, which may or may not be secondarily infected (Figure 1). No other kidney anomaly was noted. With persistent fever, IV ceftriaxone was started pending urine culture result and further evaluation. 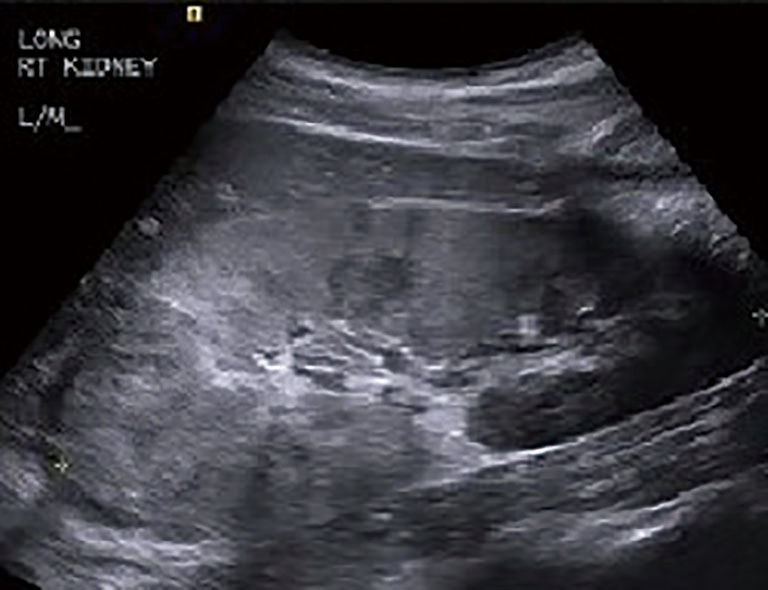 Figure 1 Ultrasound of the abdomen (day 3 of illness). Right kidney Measures 11.7 cm. Kidney is mildly echogenic relative to the liver. No hydronephrosis, hydroureter or shadowing stone. In the upper pole, there is about a 4-cm mass like area of subtle altered echogenicity. There is also a cleft-like cystic space within the focal abnormality, measuring about 2.7 cm × 1.1 cm. This has a somewhat triangular shape, broad base at the upper renal margin. Negligible perinephric fluid. Abnormal mass like area in the upper pole of the right kidney, with area of liquefaction. Favor diagnosis of subacute hematoma, which may or may not be secondarily infected.

On day 4 of illness, inflammatory markers were trending down and urine was clear. On further probing, the patient recalled that he did get hit with a soccer ball in the right flank 2 days prior to presenting to the emergency department. A CT scan (Figure 2) of the abdomen revealed a 4.9 cm × 3.8 cm lesion in the upper pole of the right. Fever up to 101 °F persisted on day 5 of illness, and repeat ultrasound of the abdomen showed a 4–4.2 cm mass in right kidney that was partially liquefied; subcapsular fluid was noted in the right kidney (Figure 3). IV fluids and ceftriaxone were continued. Repeat ultrasound on day 7 of illness showed a 3.9 cm × 3.8 cm mass in right kidney, interpreted as a renal abscess (Figure 4). Patient became afebrile by now, laboratory markers were normal, and there was overall clinical improvement. He was discharged home with plan to continue IV ceftriaxone for an additional 17 days. Oral clindamycin was added at the time of discharge. Antibiotics were stopped on day 24 of illness. 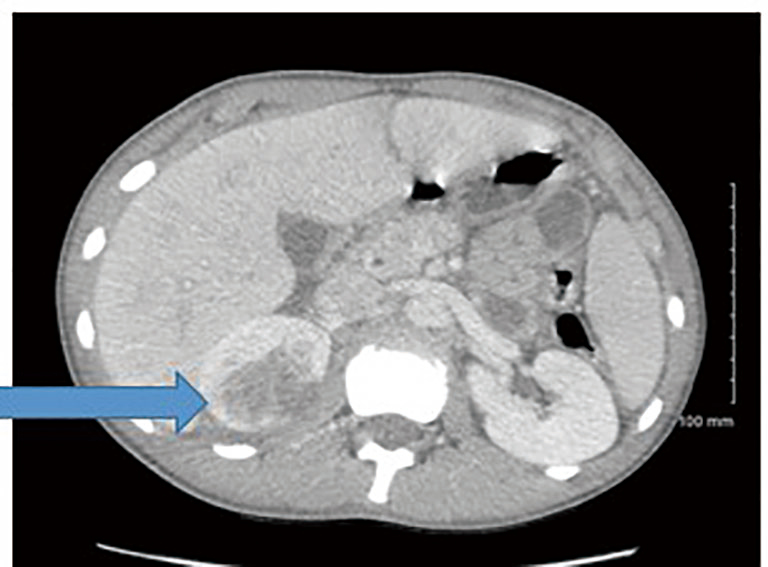 Figure 2 Computed tomography of abdomen and pelvis with and without contrast (day 4 of illness). There is a 4.9 cm × 3.9 cm low attenuation lesion in the upper pole of the right kidney (blue arrow). Slightly more inferiorly there is a 12-mm region of decreased attenuation in the mid right kidney. The left kidney is unremarkable. Differential diagnosis includes posttraumatic injury to the right kidney or acute right pyelonephritis with developing right upper pole renal abscess formation. Small amount of free fluid in the pelvis. 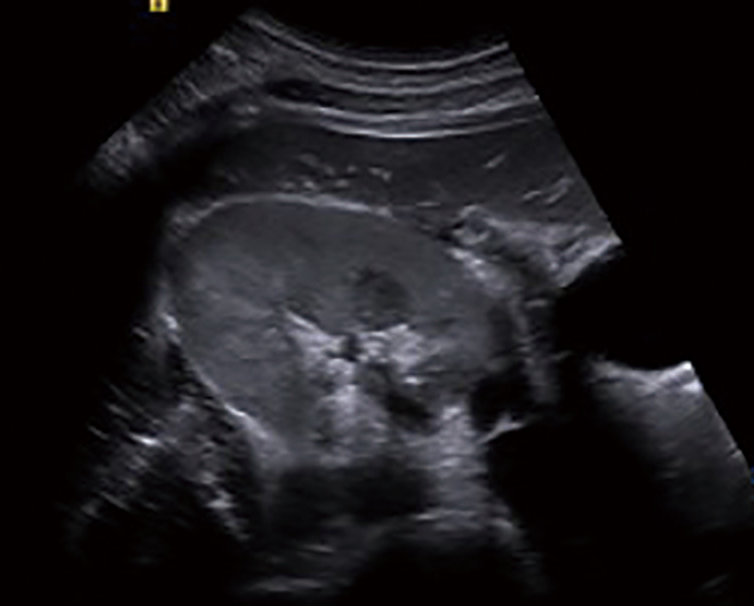 Figure 3 Ultrasound of the right kidney (day 5 of illness). The right kidney measures of 0.6 cm in length. Again noted is about a 4–4.2 cm round mass-like area of mixed echogenicity in the right upper pole of the kidney. No significant change in size from the comparison ultrasound done 2 days ago. There is a subcapsular crescent of fluid superiorly. The pattern of internal echogenicity is slightly different, as the cleft-like cystic space noted on earlier ultrasound has a slightly changed appearance. 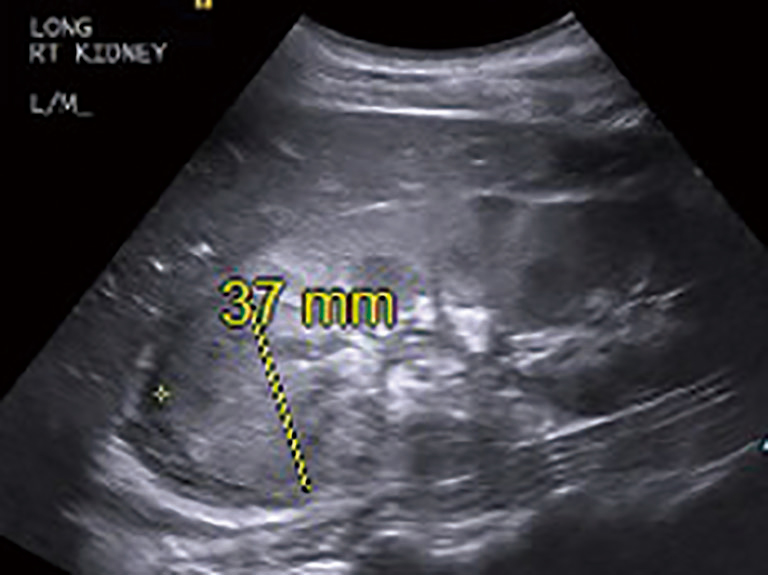 Figure 4 Ultrasound of the right kidney (day 7 of illness). The right kidney measures 11.9 cm in length; 3.9 cm × 5.5 cm × 3.8 cm heterogeneously hypoechoic, nonvascular mass in the superior pole. The appearance is again most consistent with abscess. There is a thin crescent of subcapsular fluid adjacent to the abscess, slightly increased compared to prior study. Normal renal echogenicity with no hydronephrosis, caliectasis, shadowing stone, parenchymal thinning or hydroureter.

Serial ultrasounds were used to monitor the size of the abscess. Outpatient follow up laboratory studies (white blood count with differential count, C-reactive protein, blood urea nitrogen, and creatinine) were normal on day 24. On day 34, the renal ultrasound findings were as follows: the echogenicity is normal, no hydronephrosis, a non-perfused area of the upper pole of the right kidney in the subcapsular region 2.2 cm × 2.9 cm × 2.2 cm (decreased from 4.2 cm × 4 cm × 3.1 cm on day 17).

Upon presentation, clinical examination and laboratory findings suggested an infectious illness. Appendicitis was considered, given the location of the pain and its radiation to the right side of the abdomen. The findings on initial abdominal ultrasound were inconclusive. Urinary tract infection (UTI) and pyelonephritis were also considered. Urinalysis was abnormal, and urine culture showed no growth. Psoas abscess was considered, but lack of inguinal mass made this less likely. His abdominal pain was worsened by deep inspiration and sometimes radiated to his chest. The chest X-ray was normal. In the absence of initial history of abdominal trauma, a renal hematoma was considered less likely at first; however, when the patient later recalled blunt abdominal trauma during a soccer game, the probability of a renal hematoma increased. The hematoma became infected.

Renal abscesses are rare in children, especially when there is no history of immunocompromised state or underlying renal anomaly (9-14). Typically, the presenting symptoms are fever, flank or abdominal pain and nausea or vomiting. In most cases, there is leukocytosis and elevated CRP (12). In a 10-year study of 65 cases, there was a female predominance; 31% of patients had concurrent UTIs and 31% had premorbid genitourinary conditions (13). Treatment was based on broad-spectrum IV antibiotics if the abscess was less than 3 cm. However, if it was larger than 5 cm, then percutaneous drainage was considered. Our patient had an abscess between 3–5 cm, but seemed to resolve with IV and oral antibiotics. Typically, 10–14 days of IV and 2–4 weeks of oral antibiotics are sufficient. A history of UTI (up to 8 weeks previously) may increase the risk of an abscess. Our patient had an upper respiratory tract infection 3 weeks prior to presentation.

Children and adolescents are more likely to sustain renal injury from trauma than adults. A CT scan is the preferred imaging study to confirm the diagnosis (14). It is presumed that patient had a UTI with the positive nitrite in urinalysis; however, there was no growth on urine culture. The most common etiological agents for urinary tract and kidney infection are Escherichia coli (E. coli), Staphylococcus aureus (S. aureus) and anaerobes (Klebisella) (3,11,12). The primary modes of infection spread are ascending (from the urinary tract) and hematogenous (3,11,12). Gram negative organisms (E. coli) typically have direct spread (ascending infection) and Gram-positive organisms (S. aureus) typically have hematogenous spread. Less than half of cases ever develop a positive blood or urine culture (15). A high index of suspicion is required to make early diagnosis and prevent renal scarring.

Although a renal abscess is rare in children and adolescents, it should be considered in the differential, because it presents with non-specific symptoms of fever and abdominal pain. We suspect that the UTI ascended and caused the renal abscess. The right kidney subcapsular hematoma from blunt abdominal trauma later got infected by an ascending infection. In general, smaller abscesses are treated with IV antibiotics only and larger abscesses may require percutaneous drainage if the patient does not respond to the initial antibiotics.

Informed Consent: It was waived as it was not required in the writing of this article. Case data has been entirely de-identified from person, location, and date.