We begin by positioning the infant/child supine on the operative table with the head near the anesthesiologist. The patient is prepped from the xiphoid to the perineum. This allows for manual decompression of the scrotal or labial pneumoperitoneum at the conclusion of the case and drainage of a hydrocele if present. The operative surgeon stands to the patient’s right while the assistant holds the camera from the left side. Pneumoperitoneum is established via a 5 mm cannula placed through the umbilicus using an open technique. Diagnostic laparoscopy is then performed. This approach allows for the visualization of both internal rings, provides a visual diagnosis and treatment, and eliminates wrong-side surgery. A 3 mm instrument is then introduced via a stab incision at the mid-axillary line and lateral to the umbilicus on either the patient’s right or left, depending on surgeon preference (Figure 1, panel A). This instrument is manipulated by the surgeon’s dominant right hand. A second instrument can be inserted on the contralateral side of the abdomen if necessary to allow for the camera operator to assist in the operation. Cosmetically these stab incisions have recently been shown to approach invisibility to the observer (15). It has been shown experimentally that peritoneal injury intentionally created at the site of closure results in a more durable repair (16). Therefore, prior to ligation, we cauterize and mechanically disrupt the peritoneum around the internal opening that is not adjacent to the vessels and vas deferens. At the level of the internal ring, a 25-gauge needle is passed through the abdominal wall at approximately the 2 or 10 o’clock position, depending on the side of the hernia, to hydrodissect the peritoneum off the vas and vessels in the pre-peritoneal plane. The needle is advanced to just lateral to these structures and fluid is instilled under the peritoneal tissue to lift it off the underlying structures (Figure 1B). The fluid utilized depends on the patient’s weight. As we are limited on the volume of 0.25% bupivacaine in patients under 10 kg, we will usually dissect with isotonic injectable saline. In patients over 10 kg, we often use 0.25% bupivacaine which is also used for postoperative anesthesia at the inguinal, umbilical, and instrument sites. Typically no more than 3–5 mL of fluid is needed to elevate the vas and vessels from the peritoneal tissue. 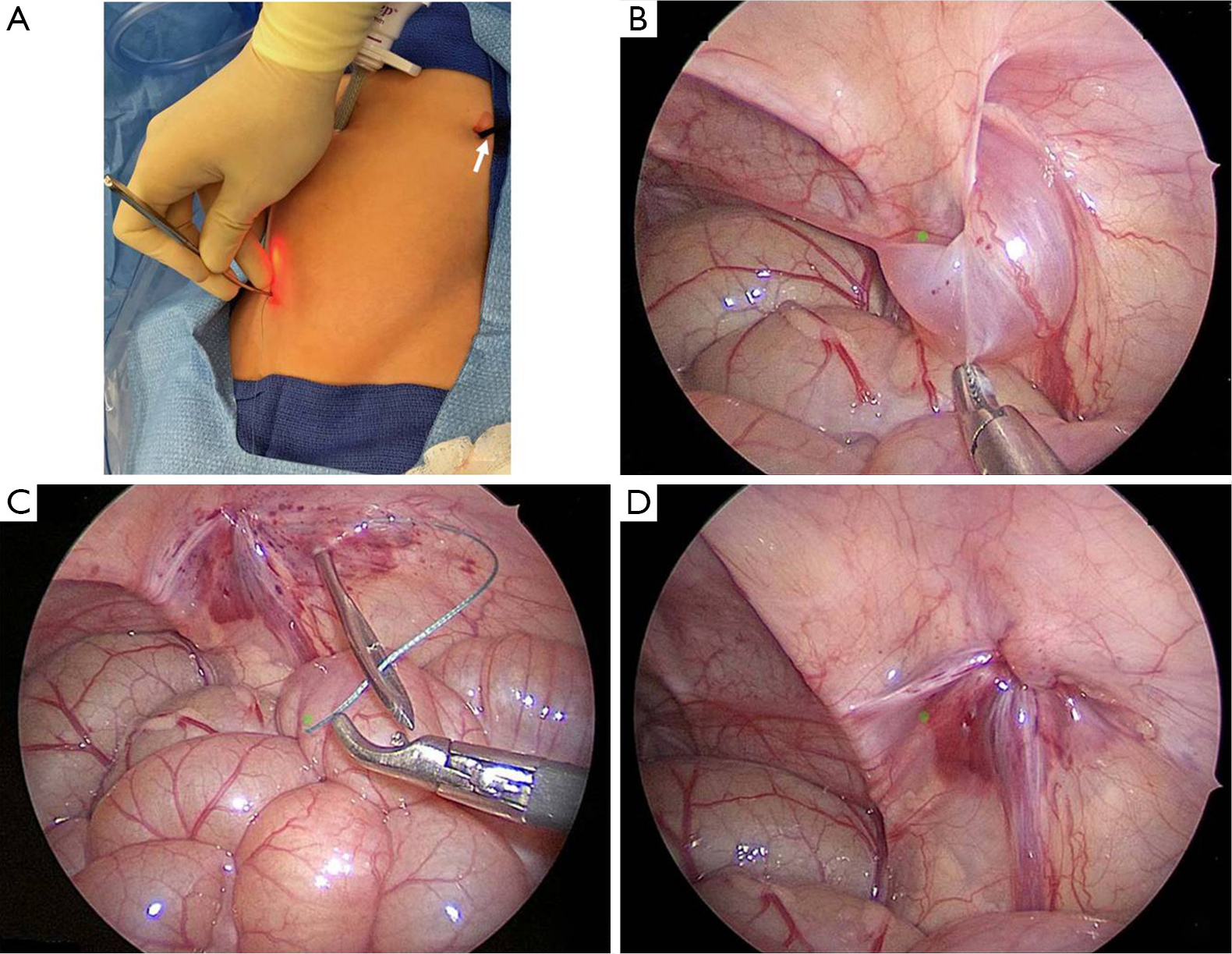 Figure 1 (A) This photograph shows the 5 mm cannula in the umbilicus through which the telescope has been introduced. It also shows a 2.7 mm grasping instrument (arrow) placed through the stab incision in the patient’s left upper abdomen. The surgeon is performing a repair of an indirect right inguinal hernia with an extracorporeal technique, and his hand is introducing the awl into the abdominal cavity at the level of the internal ring; (B) 0.25% bupivacaine has been instilled through a 25-gauge needle to elevate the peritoneum away from the vas deferens and testicular vessels in the preperitoneal plane; (C) the non-absorbable braided suture has already been passed around the medial aspect of the right internal ring and is now being threaded through the eyelet in the awl, which has been placed around the lateral aspect of the right internal ring; (D) this laparoscopic view shows the indirect right inguinal hernia has been closed in this patient.

Figure 2 This schematic drawing depicts the zygomatic arch awl which is used at our hospital for laparoscopic repair of indirect inguinal hernias.

The assistant then compresses the scrotum or labia to try to evacuate any fluid or air. The assistant should also grasp the testis and ensure its proper location within the scrotum. The operating surgeon then ties the suture around the internal opening of the hernia sac, and ligates the hernia (Figure 1D). This is visualized with the laparoscope. The process is then repeated on the contralateral side, if necessary. The instruments are removed under visualization. The stab incisions are injected with bupivacaine (if not already done) and then closed with tissue adhesive or steri-strips. The umbilical site is anesthetized with bupivacaine and then closed with absorbable sutures and a sterile dressing is applied. If a hydrocele was present prior to the operation and has not been evacuated, then it is aspirated with a large gauge needle and syringe before the patient is awakened from anesthesia.

As previously mentioned, a number of surgeons (Schier, Yeung, Shalaby, Esposito, Ponsky, Montupet, among others) have described different techniques for the laparoscopic repair of an indirect inguinal hernia in an infant or child (1-11,16-22). The two approaches can be grouped as either extraperitoneal or intraperitoneal. The early reports were primarily intraperitoneal in nature. Montupet is credited with performing the first intracorporeal laparoscopic hernia (LH) repair in 1993 (14). His technique was initially published in the French literature (16). In 1999, Montupet and Esposito modified this technique by sectioning the periorificial peritoneum circumferentially, distal to the internal ring, before closing it with a purse string suture (18,19). In 1998, Felix Schier described a technique in girls in which “N” shaped sutures were placed on the peri-orificial peritoneum (21). In 2002, he described a three-center experience in 933 patients (22).

The extracorporeal approach has been described as well. CK Yeung in Hong Kong has been utilizing this approach for a number of years and has had excellent results (personal communication). Shalaby and Ponsky have also described their experience with this approach (8,12). These techniques are quite similar with the technique described in this article. Instead of using an awl, Shalaby uses a Reverdin needle. Interestingly, the use of cauterization to promote injury around the internal ring in the extracorporeal approach is conceptually similar to the sectioning of the peri-orificial peritoneum described by Montupet and Esposito with the intracorporeal approach (16,18). Our technique is a modification of the technique originally described by Patkowski et al. (10). The modifications include the use of hydrodissection to elevate the peritoneum away from the abdominal wall and core structures, and the use of an awl for passage of the non-absorbable braided suture. A third modification is the use of intentional peritoneal injury prior to closure of the hernia sac to help improve its durability.

At this time, there is no consensus as to the best technique for the laparoscopic repair. Benefits of the laparoscopic approach appear to be its consistency in that the view seen by the surgeon is the same whether or not the hernia defect is small or large, whether or not incarceration has occurred and been reduced or not, whether it is a very premature infant or an older teenager. Thus, each surgeon is able to apply his/her technique to almost all patients presenting with an indirect inguinal hernia. In contrast, an understanding of the anatomy of the inguinal canal can be difficult, especially for young surgeons, and it can often be more difficult to manage an incarcerated inguinal hernia or a hernia in a very premature infant using the inguinal crease approach.

There have been several meta-analyses trying to compare the laparoscopic and open approaches for an indirect inguinal hernia (12,13,23,24). In one meta-analysis, 53 studies that described outcomes of the open hernia repair (OH) and the LH repair were reviewed (13). Several variables were evaluated including operative time, recurrence rate, and other complications. In that review, for an infant/child undergoing a unilateral hernia repair, there was no significant difference between the two approaches in regards to operative time. However, for bilateral disease, the laparoscopic approach was faster (P=0.01). There was also no significant difference between the two techniques regarding recurrence rate, but the rate of other complications (wound infection, hydrocele formation, iatrogenic cryptorchidism, testicular atrophy, among others) was higher for the open approach. In addition, in the laparoscopic series, it was noted that there was a contralateral patent processes vaginalis varying between 20–66% for those patients who were being operated on for a unilateral hernia. Finally, in this review, it was identified that an advantage of laparoscopy is the ability to treat rare hernias (femoral, etc.) if they are found.

One of the areas in which laparoscopy may have a definite advantage over the open operation is the patient with an incarcerated hernia (25). The bowel may be able to be reduced through external manual pressure on the inguinal canal and it should be easy to visualize the condition of the bowel at the time of reduction with the laparoscope. Also, it appears that repair of large indirect inguinal hernias in very small or premature babies may be advantageous using the laparoscopic approach (26). These operations can be difficult no matter which approach is utilized, but if a recurrence develops after the laparoscopic repair in these small infants, then it can be repaired at a later date using the open approach.

Three disadvantages of the laparoscopic approach include the fact that this technique utilizes a transabdominal approach, whereas the open operation is extraperitoneal. Second, the small incisions that are utilized for the laparoscopic approach will be visualized above the underwear line as opposed to the traditional inguinal crease incision. However, in two recent studies, these incisions were barely visible 2 years after their operation (15,27). Finally, in those infants who present with incarceration and bowel distention, the bowel distention can be a hindrance to good (or even adequate) visualization to allow the surgeon to perform the LH repair.

As a general statement, at this time, the data are not convincing regarding whether or not one approach is more favorable versus the other. As more and more surgeons become facile with the laparoscopic approach, it may become the procedure of choice for inguinal hernia repair in infants and children. More data and prospective randomized trials are needed before we know for sure whether one approach is more advantageous than the other.